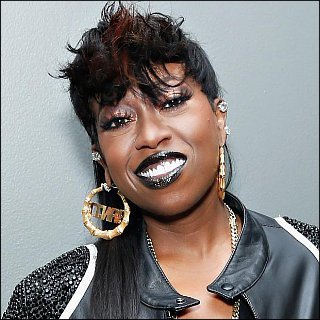 Cooperated with The Chrysler Group to support the launching of its Jeep Commander, %cMissy Elliott% once again has confirmed her status as one of the most celebrated female artists in the world. This merely was an addition to what the African-American rapper had accomplished during the year of 2005, which among others include six MTV Music Award nominations as well as the glorious success of her sixth album, "The Cookbook" (2005). The latter even has soared to the 2nd rank at both Billboard's Top 200 and Top R&B/Hip-Hop Albums Charts while sold more than 170,000 copies after one week being released. Conclusively, it had been a distinct proof that Elliott still maintains her skillful touch to create an exceptional work of music.

Born as Melissa Arnette Elliott on July 1, 1971 in Portsmouth, Virginia, U.S., little Missy experienced a gloomy childhood for she grew up with an abusive father. During this time, she often witnessed his ill treatment toward her mother, leading her to seek solace by imagining herself as a performer. Unable to bear her husband's torment, the mother finally decided to leave and took her only daughter along, raising the little child on her own. Getting inspired by her mother's courage and independence to start anew, Missy determined to materialize her dream of becoming a formidable artist. Together with %cLaShawn Shellman%, %cChonita Coleman% and %cRadiah Scott%, she established an R&B group called Sista in the late 1980s.

After asking her friend named Timothy Mosley to be the group's producer, she and the other personnel succeeded to draw the attention of DeVante Swing. A music producer as well as a member of Jodeci, DeVante then signed the group under his label, Swing Mob Records, in 1991. However, the company later came to its collapse before Sista could even produce an album. Refusing to give up, Missy kept moving forward, accompanied by Mosley who had changed his name to %cTimbaland%. They afterwards teamed up as an independent producer and songwriter, creating hit singles for various artists from 1995 to 1997. Among those, their most significant work was on %cAaliyah%'s second album entitled "One in a Million" (1996) which earned huge success, boosting Alliyah's career.

During this particular period, she used her time to make collaborations with other artists, including Gina Thompson. Her peculiar rap in Thompson's "The Things You Do," enhanced by her flourishing status as a capable songwriter, had impressed several recording companies. Receiving some offers of record deal, she eventually signed with Elektra Records which was willing to support the establishment of her own label, Gold Mine. With Timbaland as the co-producer, Missy "Misdemeanor" Elliott went to solo career by releasing "Supa Dupa Fly" in 1997. To her delight, this debut album scored tremendous attainment, reaching number 3 at Billboard 200 Album Chart while going Platinum. This, unquestionably, led her to fame and also made her gained numerous fans worldwide.

As her popularity grew stronger, Missy was busily involved in other artists' projects, such as %cMelanie Brown% of the %cSpice Girls%, %cWhitney Houston%, %cJanet Jackson%, and %cTotal%. In spite of the hectic activities, she continued to collect materials for her sophomore album. The result was "Da Real World" which came up in 1999. Featuring notable artists, like %cEminem%, %cLil' Kim%, Aaliyah, and %cBeyonce Knowles%, the album scored another success for Missy. Three out of 17 tracks, namely "She's A Bitch", "Hot Boyz", and "All N My Grill," made their ways to enter the Top 40 of Billboard Hot R&B/Hip-Hop Singles & Tracks. Striving to the 10th rank of The Billboard 200, "Da Real World" made Missy receive Platinum for the second time.

Going through the same cycle in collaborating with other artists, Missy launched "Miss E... So Addictive" in 2001. This particular album took great notice for its significant track entitled "Get Ur Freak On" was the one that directed her to win Best Rap Solo Performance at the 44th Annual Grammy Awards. Furthermore, it became extremely popular after being remixed and was included in the soundtrack of the 2001 blockbuster movie "Lara Croft: Tomb Raider". In the following year, the album's another track, "Scream a.k.a. Itchin' " brought Missy to earn one more Grammy Award for the same category. During this time, she joined with Timbaland to help composing %cTweet%'s debut single "Oops (Oh My)" which turned out to be a huge hit.

Missy created sensation in 2002 when she released her fourth album "Under Construction". The album appeared to surpass its predecessors by having a magnificent sale of over 2.1 million copies in U.S. only, therefore went two times Platinum. With hit singles, like "Pussycat", "Gossip Folks", and "Work It", the album has become her best selling album to date. The latter track was the most successful one as it topped Billboard Hot R&B/Hip-Hop Singles & Tracks; at the same time secured the 2nd rank of The Billboard Hot 100. Through this song, Missy obtained her third Grammy Award in 2003, being the Best Rap Solo Performance. In the meantime, she dropped "Misdemeanor" from her name and simply used Missy Elliott to address herself.

Her next album, "This Is Not A Test!" was released in November 2003. Although not as sensational as the previous album, it indeed scored some memorable hits, such as "Pass That Dutch" and "I'm Really Hot". After nearly two years, she finally came up with "The Cookbook". A work of pure artistic innovation, the album contained what she has described as "no artificial flavor." Beyond her career as a singer, rapper, talent scout, songwriter, and record producer, Missy has appeared in some national advertisements of The Gap, MAC Cosmetics and Vanilla Coke. In addition, she also established a joint venture with Adidas to produce clothing line, accessories, and shoes under the name of Respect Me. Being successful with her television show, "The Road to Stardom With Missy Elliott" (2005), she is really one good role model as she always aims to get the best result in her life.

Missy's "The Cookbook" was so heavily recognized by both critics and people that it got 5 Grammy nominations, with its lead single "Lose Control" winning Best Short Form Video. The song also won Best Dance Video and Best Hip-Hop Video at the 2005 MTV Video Music Awards, as Missy nabbed Best Female Hip Hop Artist at the 2005 American Music Awards.

The second single off the album, "Teary Eyed", did not receive the same love as the %cCiara%-featured hit, but Missy managed to cover it up with its third single, "We Run This". It served as the soundtrack to gymnastics-themed film "Stick It" and was nominated for a Grammy Award in the Best Rap Solo Performance category in 2006.

Due to her contribution to the music industry, Missy was honored at the 2007 VH1 Hip Hop Honors, where a slew of artists such as %cEve% and %cTimbaland% performed some of her biggest hits. Missy began working on her seventh studio album after that, though the release had been delayed for an extended time after she released two singles off the album, "Ching-a-Ling" and "Best, Best". Despite that, she still found success behind the scenes by writing and producing for other artists. Some of the songs that she produced, such as %cKeyshia Cole%'s "Let It Go", %cMonica%'s "Everything to Me" and %cJasmine Sullivan%'s "Need U Bad", topped charts and received Grammy nominations.

Fast forward to 2012, Missy finally returned with her own songs "9th Inning" and "Triple Threat", which were released exclusively on iTunes. In that same year, she also announced her hiatus on making records because "your brain needs time to refresh!" That, fortunately, didn't stop her from appearing on other artists' music. She released a remix of %cKaty Perry%'s "Last Friday Night (T.G.I.F.)" that helped the song catapult to No. 1 on Billboard's Hot 100. She was also featured on Eve's album cut "Wanna Be" and %cG-Dragon%'s "NiLiria". Meanwhile, her song with %cFantasia% and %cKelly Rowland%, "Without Me", received a Grammy nomination in 2014.

In the following year, Missy performed a medley of her greatest hits at the Super Bowl XLIX halftime show, where Katy served as the headliner. The performance was well-received and became the most watched Super Bowl halftime show in NFL history with 118.5 million viewers in the United States. Later on February 11, Missy gave an update on her seventh studio album by revealing that she was still in the process of recording it with Timbaland. %cPharrell Williams% confirmed his involvement in the album in April.

Prior to the Super Bowl 50 in 2016, Missy released a promotional single titled "Pep Rally" before joining forces with %cKelly Clarkson%, %cJanelle Monae% and %cZendaya Coleman% to release "This Is for My Girls". The song was released to promote Michelle Obama's third-world educational initiative Let Girls Learn. Missy continued releasing other standalone singles after that, in addition to appearing on %cAriana Grande%'s "Sweetener" track "Borderline" in 2018. Later in October, Missy announced that she was working on a new album titled "Iconology" which was released on August 22, 2019. Met with generally favorable reviews from music critics, the record debuted at No. 24 on Billboard 200.