The 'Straight Outta Compton' actor offers his two cents about non-fungible tokens after noticing a meme of him, Snoop Dogg, The Notorious B.I.G. and Eminem looking like Renaissance paintings.

AceShowbiz - Ice Cube has retracted his statement about hating NFTs. After describing non-fungible tokens as a "fake a** s**t," the "Straight Outta Compton" star took to Twitter to offer his clarification.

On Wednesday, February 2, a Twitter user shared a meme of Snoop Dogg, the Notorious B.I.G., Eminem and Ice Cube looking like Renaissance paintings. Alongside the snap, the user wrote, "found this dope pic on my old phone and my first thought was 'I wish this was a NFT collection.' 10/10 would mint."

Having caught wind of the tweet, the 52-year-old rapper/actor quote-retweeted it and replied, "No thank you. I actually hate this fake a** s**t." He added, "Making me a part of their bulls**t is insulting. Leave me out."

Hours later, however, Ice Cube corrected his previous statement. "Correction: I love NFTs but I hate that fake a** picture of me in that old uniform," the emcee, born O'Shea Jackson Sr, pointed out. 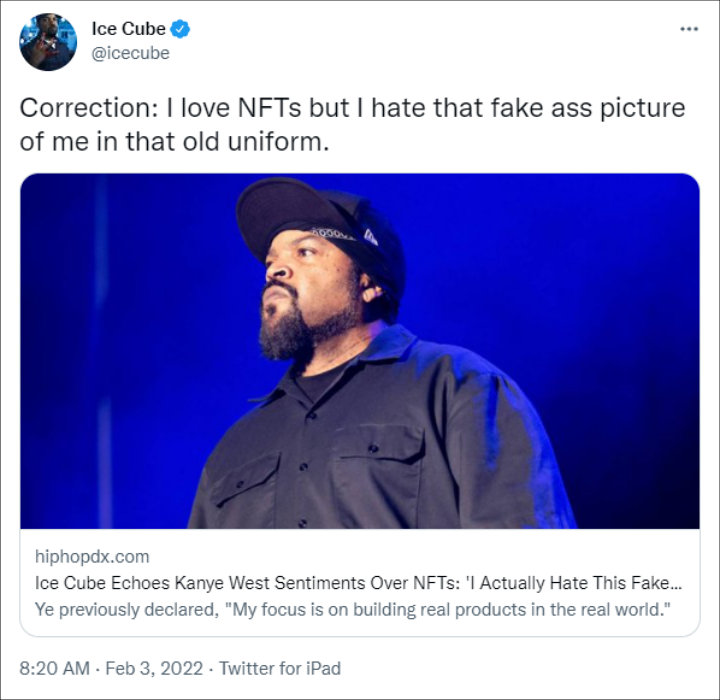 Just a few days prior, fellow rapper Kanye West made it clear that he is not doing NFTs because they're not "real." Making use of Instagram on Monday, the "Donda" artist shared a note on a piece of white paper. It read, "My focus is on building real products in the real world. Real food, real clothes, real shelter."

"Do not ask me to do a f**king NFT. Ask me later," the Yeezy designer further stressed. He then emphasized in the caption, "STOP ASKING ME TO DO NFT's I'M NOT FINNA CO-SIGN … FOR NOW I'M NOT ON THAT WAVE I MAKE MUSIC AND PRODUCTS IN THE REAL WORLD."

While Ye is not interested in doing NFTs, some celebrities like Eminem, Justin Bieber, DJ Khaled, Post Malone, Steve Aoki, Paris Hilton and Tom Brady have entered the NFT world. Model Cara Delevingne also embraced the futuristic nature of NFTs by selling her "vagina" back in May 2021.