The loyal fans of Beyonce Knowles hit back at the suggestions that Queen Bey is a copycat because her designer clutch is similar to the one that J.Lo flaunted earlier this year.

AceShowbiz - Die-hard fans of Beyonce Knowles and Jennifer Lopez are feuding on the internet. Beyonce was accused of ripping off J.Lo's style after the former posted on Instagram pictures of her all dressed-up getting ready for her husband Jay-Z's Shawn Carter Foundation Gala.

Some of J.Lo's loyal fans posted pictures showing that Queen Bey's Judith Leiber "stack of dollar bills" clutch bag was similar to the one that J.Lo had earlier this year. The Latin star first flaunted her clutch on the set of her movie "Hustlers" in May and then brought it with her to the movie premiere at the Toronto International Film Festival in September.

Beyhive fought back. One uploaded an image of the former Destiny's Child member holding a dazzling money roll bag from the same designer to the Tidal X: Brooklyn event back in 2017. "Excuse me m'am but Beyonce do no such thing!!!" one of her fans exclaimed. 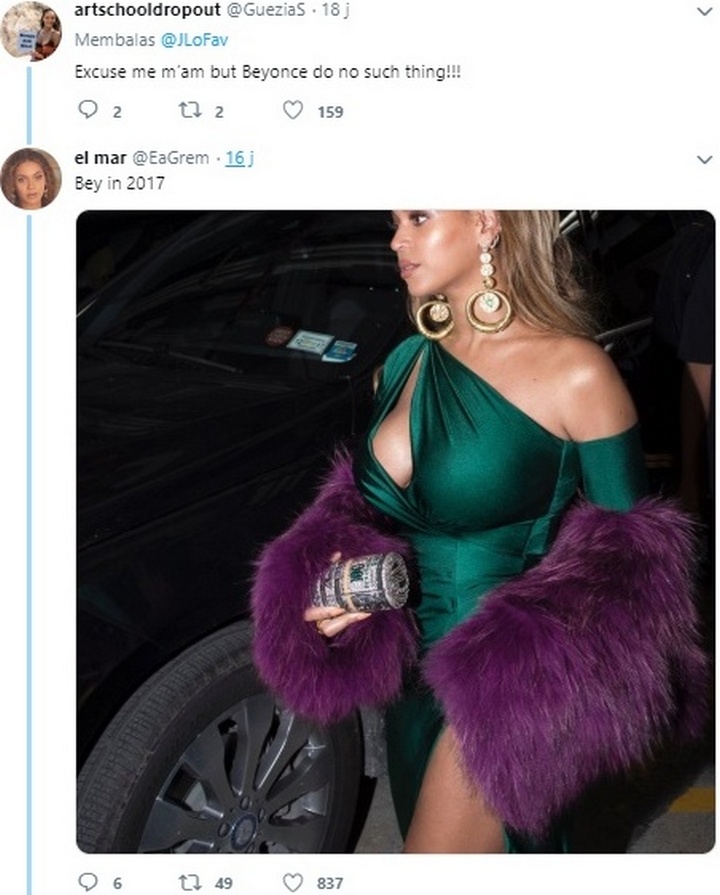 Many others pointed out the difference between Beyonce's silver-toned clutch and J.Lo's, saying Beyonce's bag was a custom-made "$1 billion" while J.Lo's was just a regular "$10k."

The Beyhive also dragged J.Lo. for allegedly "stealing" Ashanti's vocals. They referred to the long-running rumors suggesting Ashanti's vocals was used in some of J.Lo's 2001 single "I'm Real" that featured Ja Rule.

Back in 2014, Ashanti revealed in an interview that, "I demoed the record for her [J.Lo]. ... And they kept my hook and, you know, they kept some of the backgrounds and ad libs and stuff like that."

In July this year, Ja Rule addressed the rumors. In a TV interview with Andy Cohen on "Watch What Happens Live", he said, "So I wrote 'I'm Real' for Jennifer Lopez. And I sung the original version of it as a reference, but I sound terrible, of course, … Ashanti then sung the reference for Jennifer Lopez."