In the chaos after Roman's death, Eric, Bill and the chancellors are impaired by bright blinding lights. Russell is silvered by Authority guards--but not before he suspends Eric from a tall column.

The faeries examine Sookie and deliver their diagnosis:  Being part-fae, her magic is finite, and she's running low. Claudia and her brother Claude encourage her to trust them and come to her with questions--she's capable of even more than she knows. Sookie hurries from the club when she realizes losing her powers would make her normal.

At the Stake House, Andy, Kevin and coroner Mike Spencer go over the night's events. Sam sniffs over Junior's storage room and locates a box full of Obama masks.

Elsewhere, in the supe-haters hangout, Hoyt commiserates with his former classmate Joe-Bob, and Joe-Bob's friends Ray and Tyrese about how normals no longer register. Hoyt tells them about Jessica and the guys assure him he did nothing wrong: "It was date rape." Answering a call, Joe-Bob finds out that Junior has been killed with a crossbow.

Back in their cell, Bill and Eric debate how Russell maintained his strength despite the intravenous silvering. Kibwe escorts them to Salome... and Russell. Russell and Eric declare a tentative truce, and Russell points out that he could have killed Eric earlier, but he's turned the other cheek--he's pro-Lilith now. Salome admits to having dug up Russell so he could stop Roman and his blasphemy. Nora asks Eric and Bill to join them: Eric refuses outright and Bill isn't ready to give up on mainstreaming.

Alcide trains with Rikki to take on J.D. but prepares her for the possibility of defeat--there's no way he can overpower a J.D. juiced up on V. The two of them start to give into their attraction for each other when Martha arrives. Martha tells Alcide that J.D. swore he wasn't on V, and she believes him--J.D. deserves to be packmaster.

Arlene watches her wedding video with Holly, remembering happier days, before Terry went crazy. Holly reminds Arlene that "there's all kinds of things out there," and that maybe, Terry is speaking the truth. Patrick and Terry sit in an open field and ruminate about their situation. The ifrit manifests, but only laughs at them. Frustrated, Terry takes Patrick's gun to kill himself. Patrick talks him down--the others would have wanted him to die fighting.

Jason takes care of Sookie by preparing breakfast in bed. Aware she is feeling guilty, he is adamant that their parents' death was not her fault. Andy goes to Bud Dearborne for a pep talk but the former sheriff is uninterested in his problems. "The wife's outta town, the hot tub's just right, and I've got an experimental male enhancement," says Bud before slamming the door.

Lafayette arrives in Mexico and finds Jesus' decapitated head in Don Bartolo's house, but is caught by Don Bartolo. Stitching up Lafayette's lips, Don Bartolo prepares to reclaim his family's magic from him to pass it on to his unborn child, but is stopped by his wife. Maria clocks Don Bartolo and then stabs him. Approaching Lafayette with the knife, she cuts his stitches off.

Lettie-Mae goes to Fangtasia to tell her vampire daughter she's dead to her. In response, Tara drops her fangs on her mother, and makes as if she doesn't care. Pam finds Tara in her office and offers her some comfort: In 100 years, Tara won't even remember Lettie-Mae. When Tara goes in for her hug, Pam awkwardly reciprocates.

Having gathered everyone for a small ceremony around Lilith's blood shrine, Salome informs them they will drink the blood. When Dieter protests, he is killed. Rosalyn, Nigel, Steve, Nora and Salome take eager sips, while Eric reasons to Bill, "It's vampire blood; we're vampires." Although the two assume that it will have no effect on them, the entire gang makes their way down Bourbon Street riding an unexpected high.

J.D. addresses his pack--a vampire has told him the "end of days" is coming--and drinking his blood will seal them to him. As pack members start drinking down the V, J.D. offers some to Emma, but Martha catches him and leads Emma out.

Recovering in the hospital after the attack on him and Luna, Sam picks up a scent and finds Joe-Bob, working as an orderly.

Jason goes to Jessica's to share what he has learned about his parents' death. When Jessica tries to comfort him, Jason spots the blood on her face, and realizes she was feeding on someone when he arrived. Since Jessica can't name the person she was feeding on, the two argue and ultimately, Jason shoots her in the head. Although it heals instantly, Jessica orders him out.

Sookie roams the area around her house and begins discharging her faerie powers to permanently rid herself of them. Tossed out of Jessica's, Jason spots light bursts coming from Sookie's.

The vampire pack crashes a karaoke bar, where Russell is recognized by attendees of a rehearsal dinner. As the guests scream in terror, the vamps block the entrance and feed hungrily on them all. Their night takes a stranger turn when a woman appears out of a pool of blood, wearing nothing but her fangs. The group is awed by Lilith, except Eric, who is the only one who sees Godric. "This is wrong," his maker warns him. 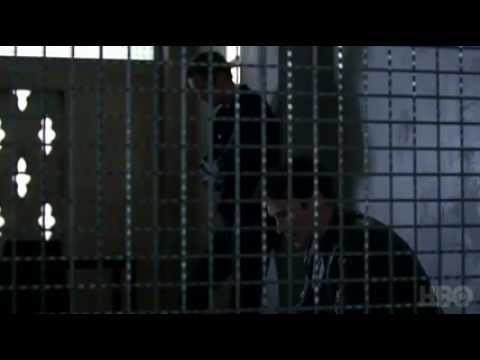 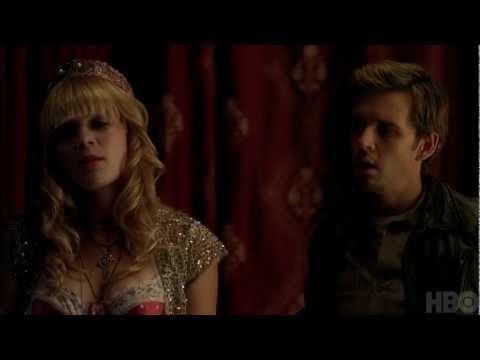 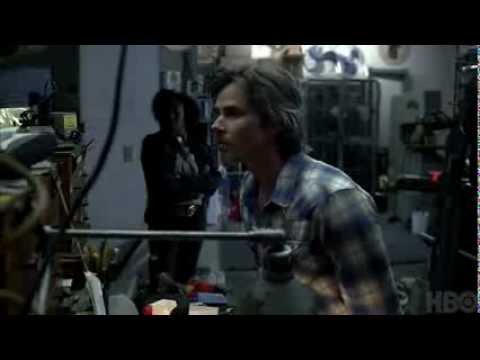 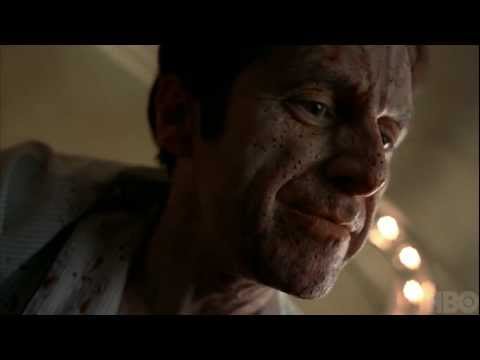