Pam, Eric and Ginger clean up Fangtasia after the raid. Willa refuses to join Eric and Pam on their quest to find Sarah Newlin but agrees to tell them what she knows if Eric releases her. Once he does, Willa reveals that Sarah has a sister -- a vampire sister -- who lives in Dallas.

Sookie returns home, struck by how alone she is after Alcide's death. However, Lafayette and James arrive to comfort her and promise to be there when she wakes up. After Sookie sleeps through the whole day, she wakes in the evening to laughter -- Jackson and Jenny have joined James and Lafayette, and they've prepared a feast for the whole town. Sookie, taken aback, tells her guests that's she's in no mood for a party, but Lafayette insists. They need to have a party to say, "F*ck you to death and hello to life."

Eric and Pam locate Sarah's sister, Amber, who's dying of Hep-V. She explains that Sarah paid her off for years to keep quiet, but now that she's contracted the virus and lost her lover Jeremy to the disease, she's more than willing to help Eric kill her. She reveals that Sarah's in town, and after being turned away by Amber for a hiding place, likely to be at a nearby Republican fundraising gala with their parents.

Lettie Mae begs Reverend Daniels to let her go to Sookie's party to say goodbye to Tara, but he refuses because vampires and alcohol will be present. When his back is turned, she dumps a bottle of Benadryl into the chili he's cooking and sneaks off to the party once Daniels is asleep. She arrives at the party and though Lafayette is quick to show her the door, Sookie invites her to say a few words about her daughter.

On the Stackhouse lawn, Andy confronts Jessica and tells her that her torturing herself over killing his daughters keeps the pain alive for him, too. He acknowledges that Jessica's been good to both him and Adilyn throughout the last few days, and he needs her help to move forward. He asks to borrow a ring for a proposal to Holly, but Jessica tells her that none of hers would be suitable. Instead, they find Sookie and Jason, who give him Gran's engagement ring. After telling the DJ to cut the music, Andy offers Holly a heartfelt proposal, and she accepts.

Seeing that Sookie is on the verge of tears, Arlene (toting a bottle of tequila) sweeps her upstairs for a heart-to-heart about losing the men they've loved.

James, noticing Jessica's improved mood, tries to convince her to go home with him, but she wants to stay at the party. Feeling blown off, James finds a sympathetic ear in Lafayette. Before long, they're making out on the porch swing.

Pam and Eric dress up as Republicans to sneak their way into the fundraiser attended by Sarah Newlin's parents, Nancy and Paul Mills. Pam is delighted with her new "Republic*nt" look, but her delight fades when Eric removes his shirt -- he's now stage 2 with Hep-V.

Jessica, searching for James, catches him and Lafayette getting it on in the car she and James bought together. Distraught, she runs back into the Stackhouse place and begs Jason to rescind James' invitation. After getting permission from Violet, Jason heads upstairs to comfort his former flame.

Lafayette interrupts Jessica and Jason's heart-to-heart, sayingthat she doesn't know the first thing about James -- but he does. Furthermore, Lafayette asks if it ever occurred to her "that Lafayette, that queen, that make all you white heterosexuals laugh and feel good about yourselves" might want "a piece of happiness, too"? He tells Jessica that despite how things went down, James is a good man, and if she doesn't love him, then she should let him be with Lafayette.

Sookie finds Bill deep in thought on her front lawn. Turning her towards the happy party scenes in the windows, he tells her she's accomplished in the last few days what's taken him decades: mainstreaming. He walks her back inside to her party and heads home.

Tuning into her guests' thoughts, Sookie overhears Lettie Mae plotting to stab Willa to get more V, but can't stop her in time. Sam wrestles the knife from Lettie Mae before she can drink any, and Lafayette forces her out. Nicole, who's been on edge all night, finally speaks up and tells everyone in attendance she thinks they're all "f*cking crazy." She's deeply disturbed that, following the events of the last few days, the people of Bon Temps' first reaction is to throw a party. She begs Sam to take her home.

Upstairs, Jason and Jessica continue their heart-to-heart, and Jason reveals that he was very relieved he didn't have to give Gran's ring to Violet because he's not so sure how he feels about their relationship. Feeling comforted, Jessica leans over and kisses him, which quickly turns to sex.

At the fundraiser, Nancy Mills is surprised to discover Sarah hiding in one of the ladies' room stalls. Sarah explains that she needs her mother's -- and her powerful friends' -- help because the yakuza are after her. Meanwhile, Eric spots Paul Mills and glamours him, hoping to learn Sarah's whereabouts. But before he can utter a word, the yakuza burst in. They kill Paul and then gun down Nancy as she and Sarah attempt to escape. Sarah is cornered by Eric and the yakuza, but he's forced to let her go and kill them first. In the melee, Sarah escapes.

After escorting Sam and Nicole home, Violet returns to Sookie's and hears Jessica and Jason having sex. She pauses to listen outside the closed door, but she leaves before announcing herself.

Back at his home, Bill climbs out of the bathtub and, looking in the mirror, is shocked to discover a Hep-V vein crawling up his neck. 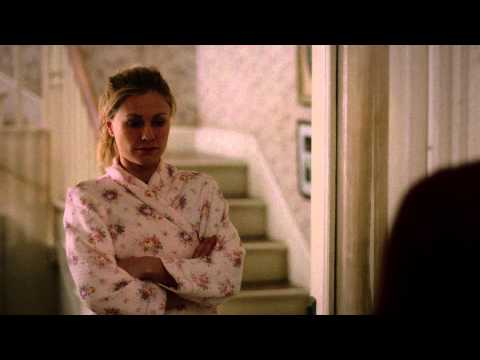 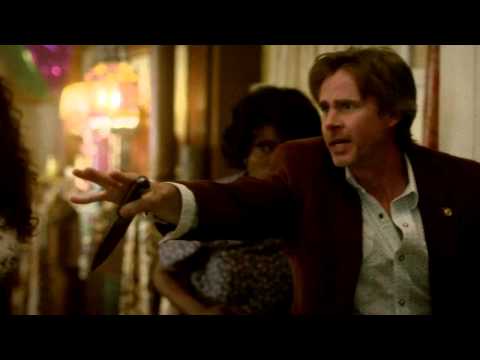