Lafayette and Sookie argue in the parking lot of Merlotte's--Lafayette can't believe Sookie told Alcide about Debbie. Sookie tries to explain she's tired of the lies; Gran raised her better. Lafayette retorts that Sookie lands on her feet, but for everyone else, she's the "angel of death."

Eric and Bill are released to hunt Russell and determine who broke him out--only four people knew where he was, the two of them, Pam and Alcide. Roman, concerned about the Sanguinistas infiltration of the Authority, wants to stop the "cancer in our midst" in a forceful way. He tells Salome to persuade Nora to talk or he'll publicly execute her.Pam stops Tara from killing herself by commanding her to stop. Returning to Fangtasia, Pam finds Eric and Bill waiting for her. Taking baby-vamp Tara aside, Bill tells her she'll get over the impulse to hurt herself. When he asks if Sookie's safe, Tara advises him to move on. Eric tries to determine if Pam told anyone about Russell, and although she hasn't, Pam can't understand why Eric has turned on her. "If I mean so little to you," she cries, "then release me."

Sookie goes to Jason's to confess to killing Debbie Pelt and tells him about turning Tara as well. Jason reels from all the information Sookie has unloaded, and Jessica, who's still there, is just as shocked. At Merlotte's, Sookie has to retreat to Sam's office for a respite from hearing everybody's thoughts about her turning Tara. Still angry about Sookie's confession to Alcide, Lafayette is possessed by the brujo demon and attacks Sookie's car. Behind the wheel later on, Sookie is forced to jump out of her now possessed car when it goes out of control.

Alcide goes to see the Pelts and tells them that Debbie is dead: She got mixed up with Marcus Bozeman and that got her killed. For that, Alcide killed Marcus. After the Pelts tell Andy they found what they were looking for, Andy is unsatisfied and tells Jason he wants to search the area around Debbie's car. Sensing Jason is in danger, Jessica materializes and glamours the Sheriff from pursuing the case.

Patrick and Terry drive to Eller's ranch. During the ride, Terry flashes back to a July 4th celebration with his squad in a prayer tower in Iraq: When an Iraqi teen told them to leave the tower, Eller shot him dead. More villagers came out to see what the commotion was about and many of them were killed in the ensuing firefight. Arriving at Eller's home, Patrick and Terry locate an underground bunker. Exploring the room, they find flame-retardant materials, and a crazed Eller pointing a shotgun at them.

Eric goes to Pam to tell her that he and Bill are in trouble--either the Authority or Russell will have his head. To protect her, he needs to release her--she's the only legacy he'll leave behind. Pam tearfully accepts his decision. Elsewhere, Bill is having his own paternal moment with Jessica. As they search their home for bugs, she asks, "You're still king, aren't you?" Bill assures her he is, but doesn't act on her suggestion to check in on Sookie. Realizing he might not see her again, he gives her a tender hug.

Judge Clements takes Andy and Jason for a night out as a thank you for clearing his son's ticket. Blindfolded and accompanied by a trio of women, they're taken to a clearing in the woods and find themselves in a mysterious secret nightclub staffed by gyrating, half-naked faeries. Maurella, the faerie that had sex with Andy in the woods finds him and rekindles their spark. Jason spots his cousin Hadley working at the club. He's confused by Hadley's urgent concern about Sookie's safety--and Hadley's accidental revelation that vampires killed his parents. Before she can say more Hadley is separated from Jason, and when Jason and Andy struggle to find her, the two are thrown out of the club.

Sam's shifter friends Suzanne and Emory invite him for a run for old time's sake. When he arrives at their home that night, he finds both of them shot in the head.

Salome and Roman threaten Nora with the True Death, but she refuses to give up any names--until Roman says he'll trigger Bill and Eric's iStakes. Roman shows his chancellors a stake made from a branch of the tree on which Judas hanged himself, with a tip made from his 30 pieces of silver. After identifying the child-vampire Alexander as a traitor who has been circulating encrypted messages of solidarity to the Sanguinistas, Roman stakes him.

Concerned about Tara's diet, Pam brings Tara a volunteer to feed on. When Tara refuses to bite, Pam commands her, and shows her how to do it safely. "This is who you are now," she encourages, "the top of the chain."

Lafayette calls Sookie after finding the wreckage from her car, but she's safe at home getting drunk. Alcide arrives at her house before Lafayette can explain what happened. Alcide tells Sookie he told the Pelts a version of the truth to protect her. Grateful, Sookie mixes Alcide a drink. As the two get drunker and drunker, they start to kiss. Bill and Eric watch from outside--Bill plans to enlist Sookie to help them find Russell. 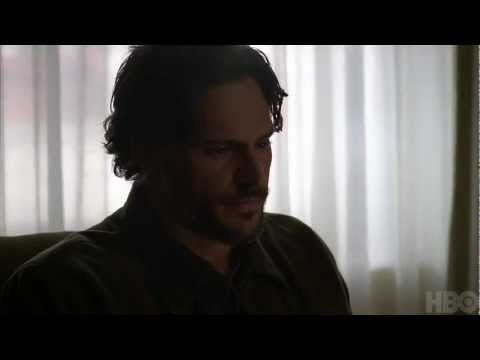 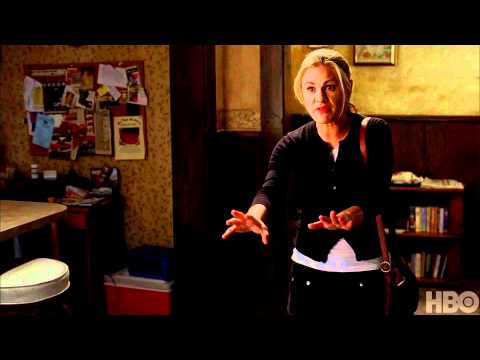 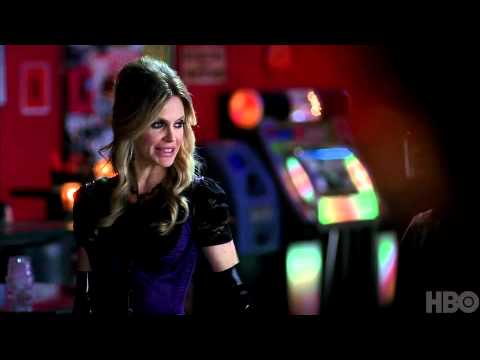 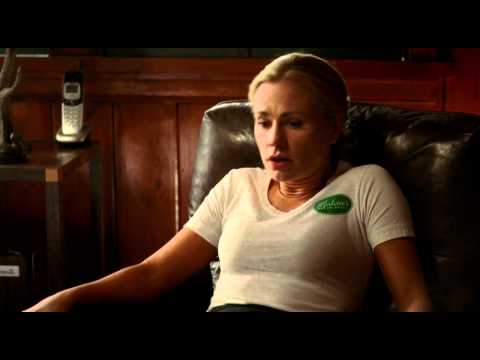