Sookie is getting wise that something has gone wrong with Eric and tries to help him figure it out by asking him what's the last thing he remembers. He starts babbling in his medieval Norse tongue (ie. Swedish) until Sookie demands he snap out of it and speak English. Basically, the Wicca chant drained the vamp of a thousand years of memories like so much human blood. Sookie says she'll help him out so long as he promises not touch her or bite her. (Wouldn't the first preclude the second?) Either way, she should have added, never call me by the name of that pint-pseudo-Italian again!

Back at the Moongoddess Emporium, the coven attends to Marnie's vamp-bite while Tara, oozing sarcasm, thanks Lafayette for bringing her to the meeting, it's been a while since she last got attacked by a vampire. While Lafayette and Tara agree that you don't mess with a thousand-year-old Viking sporting the last name "Northman," the white folks in the group get all indignant, claiming their civil rights have been violated.

Jason lies tied to a bed and panther-ravaged. Outside he can hear the panther hillbillies sit around a trailer park fire and listen to Granpa Panther tell their origin myth while they all gnaw on raw flesh and wait for Jason to turn.Then, a short break for a PSA brought to you by vampires-kill.com. Ladies, don't go into dark allies with vampires and let them bite your neck, no matter how badly you might want to. The perp in the video sits in King Bill's office, and under his reign, heads are rolling. Sookie's old flame issues a true death sentence. In the post-Russell Edgington world, a good king has no choice but to take a hard line. Next, Jess shows up to have a little heart to heart with her maker. She confides that she cheated on Hoyt with the guy at Fangtasia. Bill advises she tell Hoyt the truth, because that's what you do when you love someone.

Hmm. So what does that say about him keeping so much secret from Sookie, who is now bringing Eric home? When Eric, lost puppy look on his face, waits for her to invite him in, she realizes he must have forgotten he now owns her house. Sookie calls Pam, who is mid-neck bite on some willing stud named Jerico at Fangtasia. Realizing the witches have done something rotten to her maker, Pam streaks over to Sookie's in an instant. She thinks Bill set Eric up because he tasted Sookie, and perhaps also because Eric's abs get more screen time than his. Sookie agrees to take care of Eric so long as Pam pays for her services.

Jessica returns home to Hoyt, who is angry that she took off and freaked that the creepy doll turned up again, this time in his bed. What kind of sick move was that on Jessica's part? Jess insists she hasn't seen it since she last tossed it into the nearest swamp. Unable to acknowledge the potential side-plot of this incident, Jess launches into her confession about the other guy at Fangtasia. The news completely guts Hoyt. Jess can't stand that she's hurting him this way, so she glamours him and tells him to forget she ever said a thing.

At the Stackhouse/Northman residence, Sookie takes her babysitting gig seriously. It's getting to be beddy-bed time and she crawls down into Eric's crypt to tuck him in for the morning.

Meanwhile, Lafayette, Jesus, and Tara are drinking tequila on a porch. Lafayette thinks they need to nip the problem in the bud by going to Eric and Fangtasia to settle the whole dispute. Tara thinks that's a lame idea and Jesus agrees. It looks like Tara will be sticking around Bon Temps for as long as she thinks her cousin is in danger.After a long hiatus, we finally get to catch up with the magnificent Alcide. Sookie meets up with her werewolf pal at his pleasant home (this guy is serious husband material) to ask him if he'd be willing to take care of Eric for her. Before she can explain, Debbie walks in the room, looking like she gained a few and holding a snack tray. Alcide explains that Debbie's clean and Debbie asks Sookie for forgiveness. Unnerved, Sookie bounces.

Not that we were wondering, but next we find out where Tommy has been eating his meals. Turns out with Hoyt's momma. While she teaches Tommy to read from the home shopping network, Tommy talks to a caller at the door. He wants to buy the natural gas rights to the Fortenberry property, and you can see the wheels turn in Tommy's half-literate brain. Meanwhile, momma orders a doll from the TV, which might explain a thing or two about strange happenings around her real son's house.

Tara goes to Sookie at Merlotte's to ask her to square things between Eric and Lafayette, but Sookie plays dumb, claiming she hasn't seen Eric. When Sam walks over, Sookie leaves him alone with Tara so the two can flirt and catch up until Jesus shows up asking where Lafayette has run off to. Worried, Tara and Jesus dash off to find him.At a dinner meeting, Portia Bellefleur waxes mathematical when she makes Bill the proposition that they add sex to the equation of their excellent working and personal relationship. Bill says sure, but his heart is too old to ever feel love again. She says that's cool, just as long as he gives it to her good and proper.

In short order the following happens: Jessica gives the re-appearing doll to Arlene's baby, cue the creepy crib music; Tommy proposes to Sam that they buy Maxine's house without telling her she's sitting on a windfall, which offends Sam deeply; Sookie goes home to find Eric has flown the coop while Bill gets it on with his campaign manager just across the lawn.

Turns out Pam has Lafayette in Fangtasia's dungeon. Jesus and Tara aren't too far behind. Tara pulls a wooden-bullet loaded gun on Pam, and as we learned in the season premiere, those things work really, really well. Pam agrees to not eat, fuck, and kill all three of them so long as they procure Marnie and reverse the spell.But Marnie's clearly not going to be easy to catch. We next see her cut her wrist with a knife and drip her blood into a goblet to do her spirit-helper a solid.

Poor Jason awakens to the unwelcome image of Crystal riding him on the flea-bitten creaky bed moaning ecstatically about Panther babies while her girls stand around waiting for their turn. Gross.

Sookie sits at the kitchen table reading (a book by her maker, Charlaine Harris) when who should pay her a visit but her Fairy Godmother. She wants her to come back to Fairyland where she'll be safe, but Sookie refuses her, asking "When did you ever keep me safe?" And there's an answer to that seemingly rhetorical question: Fairy Godmother Claudine protected her the first night that crazed man came after Sookie and Bill showed up to save her. Seconds later Eric pounces on Claudine and drinks her delicious fairy blood until she turns to a pile of dust. At least he says he's sorry. 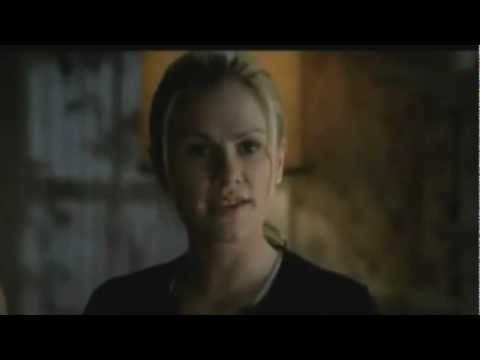 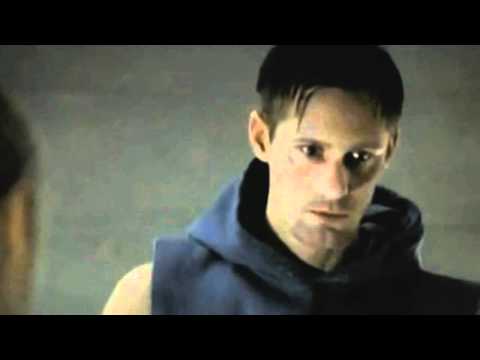 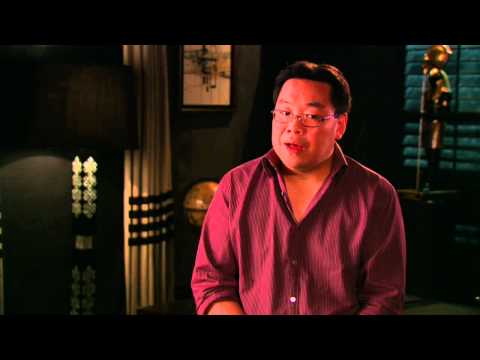