Where's the one place a guy can blend in with 11 lovely ladies by his side? Vegas, baby!

The ladies are off to Las Vegas where everyone will be getting a date. Unfortunately, one of the outings will be the dreaded two-on-one date in which someone will be sent home. Scoring the first and only one-on-one date is Shawntel. Her first trip to Sin City is certainly memorable as she's allowed to go on a shopping spree at a high-end mall. Most guys despise shopping, but Brad doesn't mind spending the day with Shawntel. Some of the ladies seem a tad jealous after realizing the obscene amount of money that was spent on all the merchandise. Cha-ching!

Hey, It's Your Funeral

After doing the whole Pretty Woman shopping scene during the day, Shawntel gets to try out one of her brand new dresses to experience nightlife in Vegas with Brad. They enjoy a rooftop dinner under the bright lights of the city as Shawntel tells some of her on-the-job embalmer tales. You may think Brad would be a bit freaked. In truth, he thinks Shawntel is the hottest funeral director he's ever met. He gives her a rose and they end the night with a fireworks show and a kiss.

The group date takes place at a race track with Brad pulling up dressed in a full NASCAR outfit. The ladies follow his lead by suiting up for a race around the track. Everyone is having a great time with the exception of Emily. Her fiancé was a racecar driver before her was killed in a plane crash. Brad had no idea about Emily's story, but can tell she's not herself. He feels like a jerk when he finally gets the scoop. But Emily wants to press on. She gets behind the wheel and races around the track. It's a brave moment that will hopefully allow her to move on and perhaps find love again.

Brad pulls Emily aside again at a pool party where she worries that her story has scared him off. A few of the other ladies are upset that Em seems to be getting all the attention. Thinks get a little awkward, so Michelle pulls him aside to give him the lowdown on all the immature girls that are there. When Brad steers the conversation back to her, Michelle steers her lips towards his. But at the end of the night, Brad gives Emily a rose. Guess she didn't scare him away after all.

Ashley and Ashley are devastated when they learn they will be going on the two-on-one date. These two have become friends and now one of them will be heading home. The date involves actually participating in Cirque Du Soleil's high-flying Viva Elvis show. But only one woman can continue on as Brad's co-star onstage. He gives Ashley H. a rose which means Ashley S. has left the building.

At the cocktail party, Brad makes Alli feel special with a private dessert and Marissa gives him an envelope filled with little notes. Then there's Michelle, who takes a seat on his lap and tells Brad he is not allowed to talk. Michelle says she's different from the other girls. Can you say understatement? She kisses him repeatedly as she says it's time to send some girls home. He'll be allowed to talk the next time they get together, which is nice.

Shawntel, Emily and Ashley H. are safe as Brad gives more roses to:

Marissa and Lisa are heading home. Eight ladies remain and they'll soon be heading off to some truly exotic lands. But the question remains: Who will land The Bachelor? 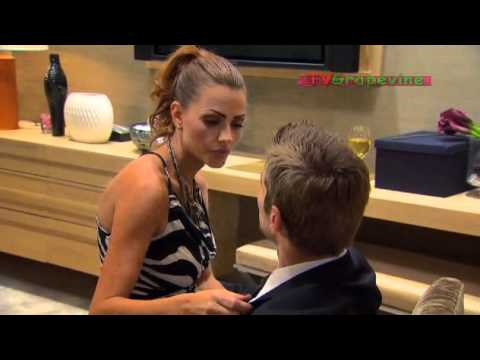