The daughter of Alec Baldwin and Kim Basinger posts thirst traps on her social media platform just weeks after shocking her fans with her shaved-head look.

AceShowbiz - Ireland Baldwin has fans gushing after posting thirst traps on social media. The daughter of Alec Baldwin and Kim Basinger left little to the imagination after she uploaded photos of her wearing a sexy backless top.

Making use of her Instagram account on Sunday, September 4, the 26-year-old beauty uploaded a series of sultry photos. In it, she posed fiercely in a black backless top and showed off her new buzz cut.

In one of the snapshots, Ireland looked almost topless, only wearing a necklace around her neck as she gave fans another look at her drastic hair transformation. It's only in her mirror reflection that fans can tell that she's not actually topless. In another image, Ireland could be seen standing on a balcony admiring the city skyline as she turned and looked at the camera over one shoulder. 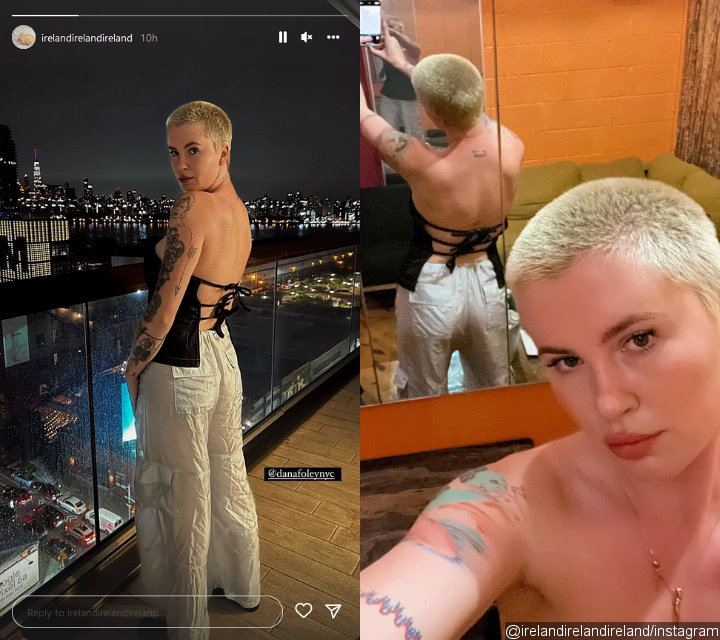 Her sexy posts came a few days after she successfully shocked her fans with her new shaved-head look. On August 20, she turned to her Instagram account to share a photo of herself with a freshly shaved head. She also bleached the short locks platinum blonde.

"Don't tell me I won't do something because I will," Ireland wrote in the caption of the picture. She added, "buzzed by @hairmettle [love emoji]," and credited hairstylist Hannah Bonetti for the edgy hairdo.

Ireland also shared a snapshot of her new hairstyles on her Instagram Story. She then added a note about why she decided to shave off her locks. "Do things that scare you. Do things that you'll never do," she began.

"My hair was destroyed by years of bleach and modeling and bulls**t since I was 17," Ireland added of her experiences as a model, a career that began after she signed with IMG in 2013. "It's long overdue for a restart/refresh," she further stressed.

Ireland later admitted that she actually has "always wanted to do this" but she "was always scared" about what people might think. As for now, she "[doesn't] care about what other people think," noting that she "[feels] more beautiful than ever."

Ireland Baldwin Not Getting 'Monthly Allowance' From Famous Parents