When debuting her new hairstyle on her social media account, the daughter of Alec Baldwin and Kim Basinger also urges her fans to 'do things that scare you.'

AceShowbiz - Ireland Baldwin wants to step out of her comfort zone. The daughter of Alec Baldwin and Kim Basinger has successfully shocked her fans after she debuted her new shaved-head look.

The 26-year-old model turned to her Instagram page on Saturday, August 20 to share a photo of her with a freshly shaved head. She also bleached the short locks platinum blonde. "Don't tell me I won't do something because I will," she wrote in the caption, adding "buzzed by @hairmettle [love emoji]" and crediting hairstylist Hannah Bonetti for the edgy hairdo.

Ireland also shared a snapshot to her Instagram Story, superimposing the picture with a message about her newly invigorated outlook on life and beauty. "Do things that scare you. Do things that you'll never do," she began.

"My hair was destroyed by years of bleach and modeling and bulls**t since I was 17," Ireland added of her experiences as a model, a career that began after she signed with IMG in 2013. "It's long overdue for a restart/refresh," she added.

Ireland further admitted that she actually has "always wanted to do this" but she "was always scared" about what people might think. As for now, she "[doesn't] care about what other people think," noting that she "[feels] more beautiful than ever." 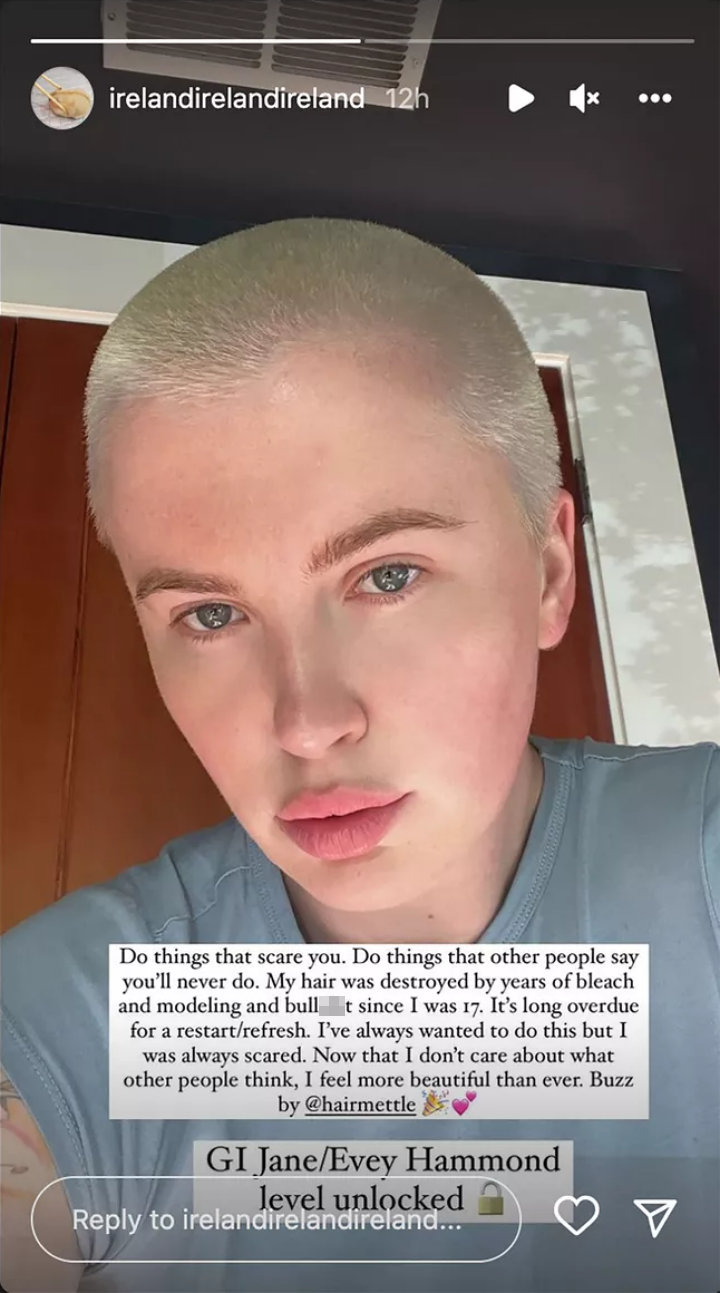 Ireland Baldwin showed off her new drastic transformation with a lengthy message.

Needless to say, Ireland's friends, fans and family alike were all amazed by her bold and buzzy switch-up. Words seemingly escaped Paris Hilton as she left a simple smiling face with heart-shaped eyes emoji on Ireland's post to show that she adores the new style.

Ireland's mother Kim didn't pass up the chance to tell everyone that she's proud of her "baby." Kim wrote, "Don't tell her not to do something……. because she will. i'm a witness to that and have been for many years… Simply beautiful."

Aside from Ireland, female celebrity who bravely shaved their long tresses was Doja Cat. Earlier this month, the Grammy-winning raptress showed off her buzz cut, admitting that she never likes having hair. "I like don't like having hair," Doja opened up to her followers during an Instagram Live session, "I just do not like to have hair."

Not stopping there, Doja also shaved her eyebrows during the same live session. Holding a pink heart mirror in one hand, the "Say So" hitmaker carefully used a razor to shave her eyebrow while she continued filming.

Lauren Jauregui Likens Two-Faced People to 'Mean Spirits': 'I Don't Vibe' With Them

Ireland Baldwin Rings in the New Year With Pregnancy Announcement