Aside from introducing her bleached eyebrows, the 64-year-old Queen of Pop shows off her new bright pink hair in a seemingly topless selfie she posts on her social media account.

AceShowbiz - Madonna is known for her unique and brave fashion style. Taking to her social media platform, the Queen of Pop has debuted a brand new "Alien" look after she bleached her eyebrows.

On Monday, September 5, the 64-year-old superstar turned to her Instagram Story to show off her new look. She posted a selfie of herself staring at the camera with her bleached eyebrows.

Madonna, who seemingly went topless when taking the snapshot, wrote over the image, "Alien." She also sported braided light pink hair, red lips, a bunch of necklaces and a pair of big hoop earrings. 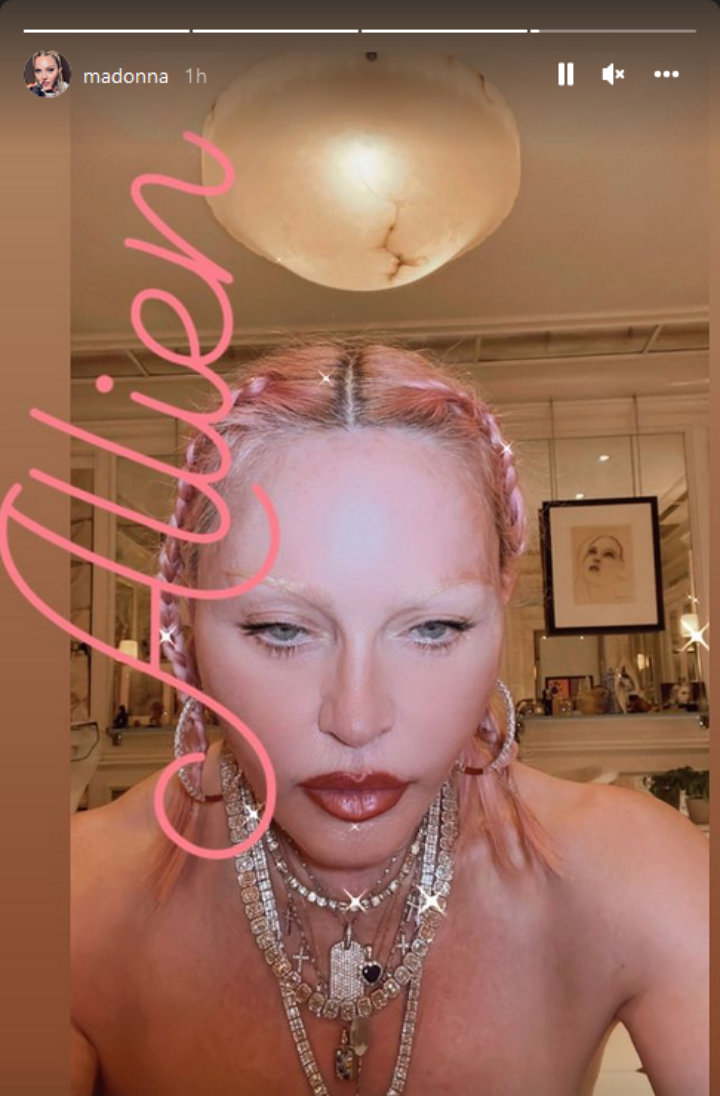 Prior to introducing her bleached eyebrows, Madonna dyed her hair bright pink. The "Vogue" hitmaker debuted her pink hair makeover shortly after celebrating her 64th birthday in August.

Madonna was first seen with her new pink hair at New York's JFK Airport on August 24. As the "Material Girl" songstress walked through the airport, she rocked a sweatshirt with a white design on it and sweatpants. The musician, who had a pair of sunglasses on, avoided photographers as she pulled up the sweater to block out her face. Despite shielding her face, the pink hair was impossible to miss.

The new hairstyle must have been a recent decision as when Madonna celebrated her 64th birthday in Italy, she shared plenty of photos in which her hair was still bright blonde and long. In pictures and videos she shared on her birthday, the "Like a Virgin" hitmaker French kissed two glamorous women in the back of a car.

The moment was strongly reminiscent of her onstage kiss with Britney Spears and Christina Aguilera at the MTV Video Music Awards in 2003. "Birthday kisses with my side b***hes….," Madonna captioned the celebratory clip, set to the classic song "That's Amore" by Dean Martin.

Madonna, who's known for raising eyebrows, has been sparking debate over her youthful look. Ahead of her 64th birthday, the "Papa Don't Preach" singer made use of her Instagram account to ask her fans for birthday gifts with seemingly heavy-filtered pictures.

Reacting to Madonna's youthful and smooth skin in the snapshots, Internet sleuth suggested the singer seek professional help. "someone needs to help her get evaluated for dementia," one person shared his/her thoughts on Twitter, with another adding, "She needs to get serious help. fr."

JayDaYoungan's Ex 'Tired' to Be Blamed for His Death

Madonna Bears Uncanny Resemblance to Faith Evans in This Look