JayDaYoungan's Ex 'Tired' to Be Blamed for His Death

In a separate tweet over the weekend, Jordan B also admitted that she's still not able to move on following the tragic passing of the '23 Island' rapper in July.

AceShowbiz - JayDaYoungan's ex-girlfriend wanted to set things straight that she's not responsible for her boyfriend's death. Jordan B has been forced to defend herself after she's apparently blamed for the murder of the Bogalusa native.

Taking to her Twitter account over the weekend, Jordan denied involvement in the death of her baby daddy. "I'm so tired of y'all blaming me for a death that I had nothing to do with!" she wrote in a since-deleted tweet.

Jordan claimed that although JayDayYoungan beat her during their relationship, she never wanted him to be harmed. "Like stop it! All the s**t Jay did to me, yall really think that?" she clapped back at the Internet trolls. "Come on now! I then been beat clueless, literally & I NEVER wanted a hair touched on Jay. Like what about when I was out into a coma … really I never tried to get that boy hurt ! Like yall making s**t up."

In another tweet, Jordan said she's still not able to move on from JayDaYoungan following his tragic passing. When one user asked, "bra how tf do y'all b moving on from sb u did EVERYTHING with??? this s**t so hard," she replied, "I couldn't & still can't."

Jordan also shared a throwback picture of her happy moment with the late rapper and their son. "Only thing that was real," she captioned it. Seemingly deciding to focus on the future, she then added in another post, "Ima just put all of this behind me. Me & My Son will love our life FOR US! And be happy for US! We all we got & need." 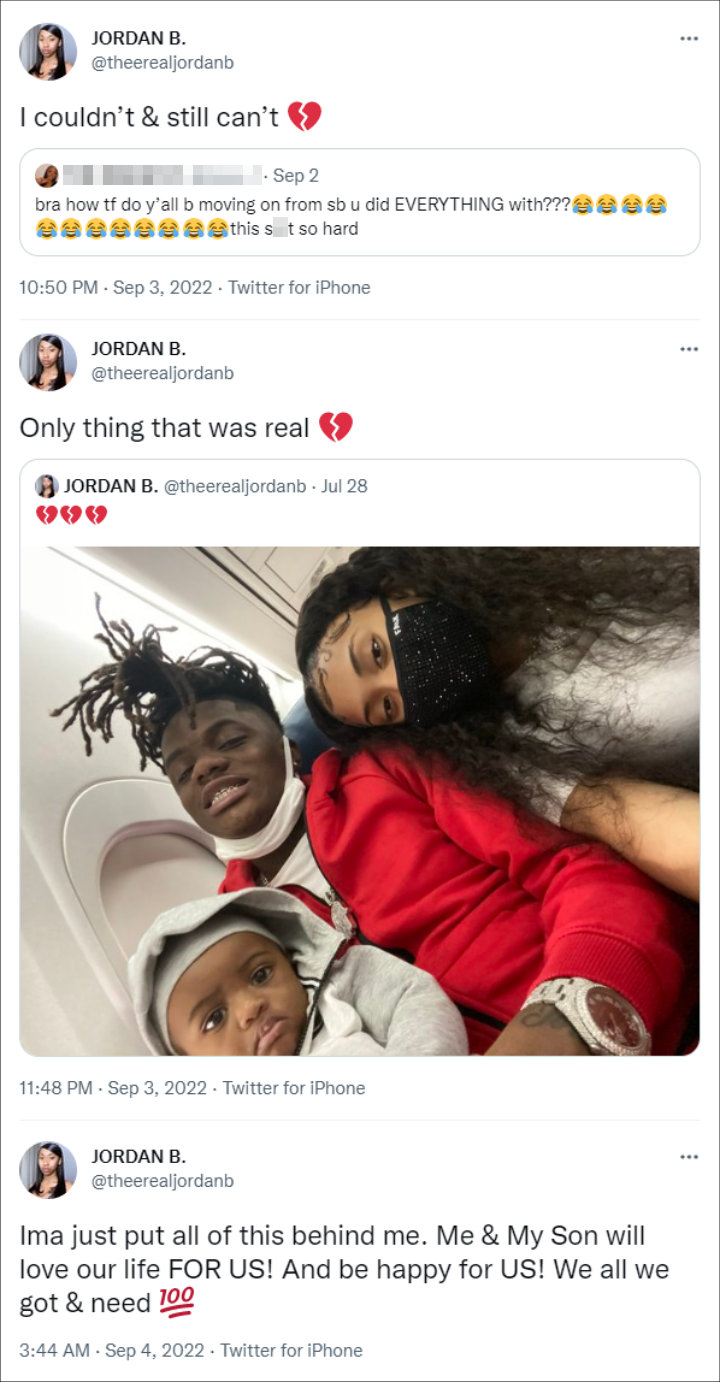 JayDaYoungan died on July 27 at age 24 after he and his father were ambushed by gunmen at their Bogalusa home. He was shot at least eight times and was taken to a nearby hospital, where he was pronounced dead from the injuries. His father was shot twice in the arm, but survived.

Following his death, Jordan mourned on Twitter as writing, "Thankful I was able to see / spend time together with him & our son.. who knew that morning would've been our last time seeing him. I'm hurt bad. We went through so much since 2017. My first love, my first everything. I will never be the same."

Meanwhile, Carena V, who was dating JayDaYoungan at the time of his passing, penned a heartfelt post in which she described him as "a kind-hearted sweet soul" who was very forgiving. "Thank God my last words to you were I love you, I hope you know how much tho....," she shared. "Im so hurt bae, how could you leave me like that I would've never left you …. EVER , one thing we could do is make each other smile, such a kind hearted sweet soul..."

"the thing I admired about you most is you forgave, always… and that's all that really matters bby," the post continued to read. "That's what God wants the most out of everyone so I know you made him proud... first mazi now you ion know how I can keep going... im sooooo hurt... my best friend, my headache, my husband, my everything, my baby, you didn't deserve this... i still can't believe it."

JayDaYoungan was laid to rest on August 7 following a memorial at the Bogalusa High School auditorium.

JayDaYoungan's Father Details Shooting That Killed the Rapper, Thinks It's Driven by Jealousy