In a new post on her Twitter account, the ' F.N.F (Let's Go)' femcee insinuates that she doesn't need to be defended by others despite receiving hate comments online.

AceShowbiz - GloRilla is one of the most popular up-and-coming raptresses now. Just as much as her fanbase is getting bigger, the "F.N.F (Let's Go)" femcee has her fair share of getting hate comments. Born Gloria Woods, Glo never hesitates to clap back at the Internet trolls.

In a new post on her Twitter account, the rapper insinuated that she didn't need to be defended by others. "Y'all please stop saying people are being mean to me cause I feel like yall calling me a weak a** b***h when y'all say that," she tweeted on Sunday, September 4, adding two laughing emojis.

Refusing to being bullied, the Memphis star added, "I never been bullied a day in my life people can talk on the INTERNET all they want at the end of the day LIFES GREAT P***Y STILL GOOD." 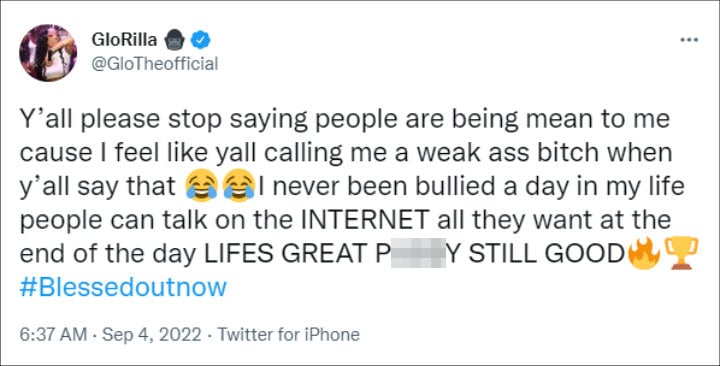 Prior to this, the "Blessed" raptress made use of her Instagram account to slam those who body-shamed her on Internet. "This is my last time addressing this, you mfs better get use to this slim body, green pretty a** eyes & big beautiful nose of mine, cause ain't a damn thing gone change," so she wrote on August 29. She continued, "Yall can hate yall self all you want, but I luv me some BIG GLO."

After her message was reposted by The Shade Room, fans and fellow musicians quickly showed love for the femcee, who signed to Yo Gotti's CMG Records. Summer Walker co-signed Glo's message as she left heart eyes and clapping emoji underneath the post. Meanwhile, Coi Leray wrote, "SHE SAID WHAT SHE SAID !!!!!!!!!"

That aside, the "Westside Baby" raptress recently released a new banger titled "Blessed" that followed up her smash hit "F.N.F. (Let's Go)". Released on Wednesday, August 31, the new song features the raptress talking about how blessed she is. "He got 99 problems and the biggest one is me, all of these lil b***hes and the biggest one is me/ Mug up on my face I know they're tryna get the tea, I don't be f**ked up 'bout nothing, 'cause I be smoking weed," she raps on the track.