The 'Wild Thoughts' hitmaker reveals his reaction upon learning that his 'Wish Wish' collaborator has managed to send in her verse for a song called 'Big Paper' on time.

AceShowbiz - Cardi B has become a "last minute" addition to DJ Khaled's new album, just hours before its release.

The "Wild Thoughts" hitmaker was preparing to unveil his 13-track "Khaled Khaled" project on Friday, April 30, but decided to slip in an extra collaboration with Cardi after the "Bodak Yellow" rapper sent in her verse for a song called "Big Paper".

Khaled took to Instagram to share video footage of the moment he received the news, which dropped while he was in the middle of a big jewellery purchase in his backyard.

In the clip, he admits he wasn't expecting Cardi to turn in the record on time, explaining, "I sent it to her last minute so I'm not expecting nothin'. It's all good [sic]."

However, when his associate reveals the verse had actually been completed and submitted, he shouts in celebration and leaps into his swimming pool.

He also shared an updated version of the "Khaled Khaled" tracklisting, which had "Big Paper" slotted in at number three. The producer captioned it, "CARDI B VOCALS IS IN!! ALBUM 101% DONE [sic]!!!!"

Cardi previously worked with Khaled on his 2019 album "Father of Asahd", featuring on the track "Wish Wish" with 21 Savage. She also stole the spotlight in the music video for the collaboration song as she flaunted her famous curves in a tight black jumpsuit with plunging neckline.

The star-studded "Khaled Khaled" project will also include new collaborations with former rap rivals Jay-Z and Nas on "Sorry Not Sorry", Lil Wayne and Jeremih on "Thankful", Justin Timberlake on "Just Be", and Justin Bieber and 21 Savage on "Let It Go". 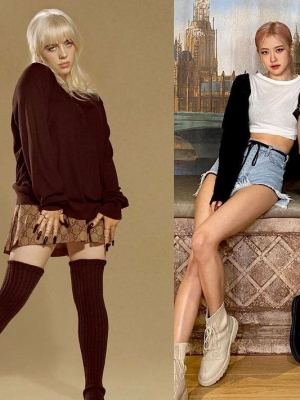 The Weeknd and H.E.R. Celebrated at Music in Action Awards

James Arthur and The Script Reach Settlement Over Copyright Feud