J. Cole to Release 'Be Free' on Streaming Services in Light of George Floyd's Tragic Death

The 'Middle Child' rapper, who has joined the Black Lives Matter protest, penned the protest track back in 2014 following the fatal shooting of Michael Brown by an officer in Ferguson, Missouri.

AceShowbiz - J. Cole is to release a 2014 track he penned about racial injustice on streaming services following the huge protests sparked by the death of George Floyd at the hands of police.

The musician showed up to stand alongside protesters in his hometown of Fayetteville, North Carolina earlier this month, as they took to the street in one of many demonstrations demanding an end to police brutality and systemic racism in the U.S. and across the world.

In response to the protests rapper and singer, full name Jermaine Lamarr Cole, has greenlit the full release of "Be Free", the protest track he penned following the fatal shooting of Michael Brown by an officer in Ferguson, Missouri in 2014.

His manager and Dreamville Records co-founder Ibrahim Hamad revealed plans to share the song, which originally only appeared on SoundCloud, across all streaming platforms.

"I've def seen a bunch of y'all tweets and got a bunch of texts asking for "Be Free" on streaming services," Hamad wrote on Twitter on Monday, June 08. "I spoke to Cole today though had to let him know about that and he with so let me work on getting up this week." 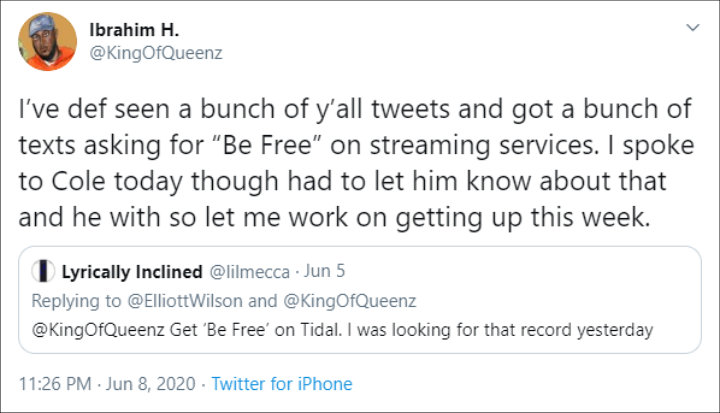 At the time of "Be Free"'s original release, Cole wrote alongside the track: "Rest in Peace to Michael Brown and to every young black man murdered in America, whether by the hands of white or black. I pray that one day the world will be filled with peace and rid of injustice. Only then will we all Be Free."

The "Middle Child" hitmaker also recently praised the mayor of Minneapolis, Minnesota and city council members for voting to disband the Minneapolis Police Department, after one of their officers was charged with second degree murder in relation to Floyd's death.

Three other officers who were present when policeman Derek Chauvin knelt on Floyd's neck for nine minutes, resulting in his death, have been charged with aiding and abetting Chauvin's alleged crime.