The 'Bring the Funny' judge doesn't understand why the troll, whose name is Kari Rhyan, follows her in the first place after she calls her 'a slave' and 'overrated.'

AceShowbiz - Given how active she is in social media, Chrissy Teigen has pretty much mastered the way to deal with online trolls. But this one hater that the supermodel recently encountered on Twitter appeared to be so hard to deal with since she refused to give up and kept attacking her. Thus, the two ended up getting engaged in a war of words on the micro-blogging site.

It all started after the hater, whose name is Kari Rhyan, mentioned her out of nowhere, "You are waaaaaay overrated." Knowing Chrissy, she wouldn't just let that one slide and hit back, "You aren't rated at all sooooo."

Chrissy Teigen hit back at a troll who called her 'overrated.'

Just when she thought that Kari would not be replying to her, she did just that. "I'm not a celebrity so F**K YOU," she wrote back, prompting a response from Chrissy that read, "lol the anger." Again, Kari didn't give up and attacked back, "You are a slave."

When another person chimed in and praised the cookbook author for her wit, Kari was so in disbelief that he mocked her, "Wit?! Hahahahahaha!!!!!" Her response made Chrissy get even more confused as to why the hater follows her in the first place when she is "so mad at me but I hope you have better days. I have a lot like this too and maybe this is just one of those."

Kari responded back. This time, she accused the "Bring the Funny" judge of putting her "on blast like a b***h." Chrissy didn't back down and wrote back, "Yikes. I tried to understand you girl but you aren't helping," to which Kari responded, "Nah, you have minions. It's sad as f**k." 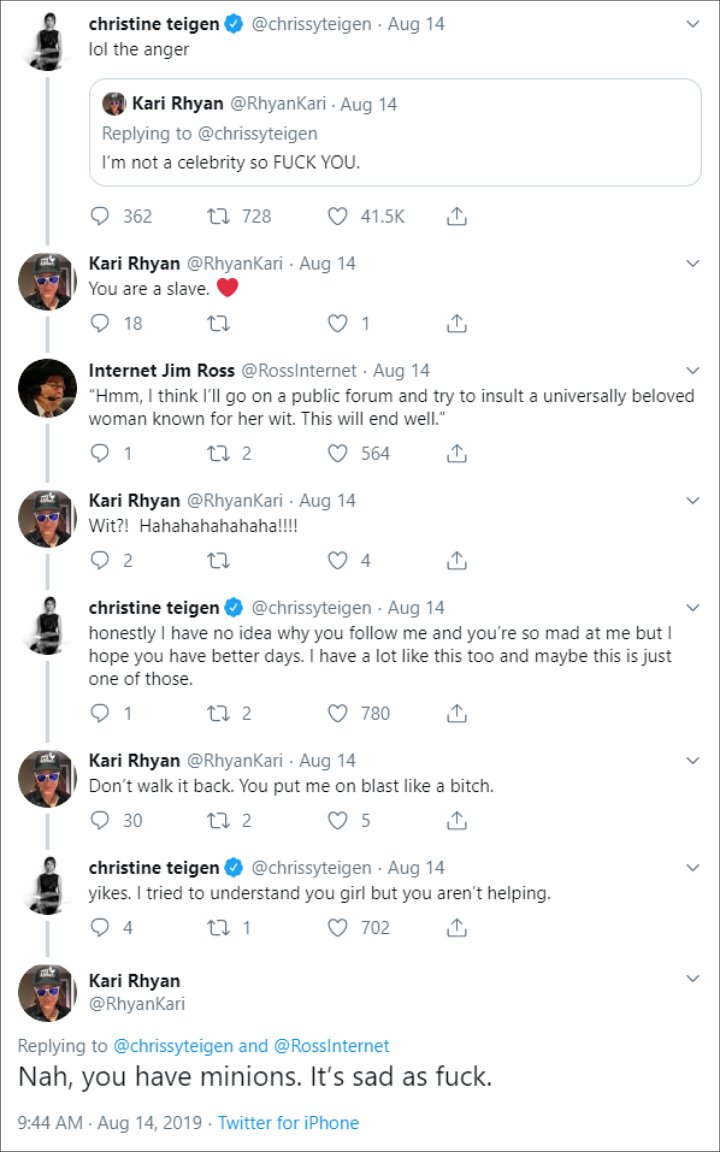 Chrissy Teigen entered a war of words with the troll.

Chrissy probably thought responding to the hater would not worth her time anymore, so she stopped doing that. Instead, one of her followers came to her defense. "Right, in this context 'minions' are 'followers,' and she has like 11 million of them, and you tried to insult her in a public forum, so maybe that wasn't a super awesome idea."