Lindsie, Todd's daughter with his ex Teresa, responds to her brother Kyle's accusations that she's 'the source of information that led to her father's arrest,' while Todd and his wife Julie have pleaded not guilty to all 12 charges.

AceShowbiz - A feud is brewing within Todd Chrisley's family as he and his wife Julie Chrisley are facing tax evasion charges. Todd and Julie's son Kyle Chrisley accused his half-sister Lindsie Chrisley of feeding information to authorities that led to their father's arrest, but Lindsie has hit back at her brother's claims.

Kyle, who recently patched things up with his father after suffering a relapse, slammed Lindsie and her mother Teresa on a Facebook post. "A year and a half ago my biological mom and sister were responsible for turning my father into the Georgia department of revenue for tax evasion," he wrote, before adding, "My hope is that my sister Lindsie will seek the same forgiveness from my daddy that I have, that he is able to forgive her and that my family will one day be whole again."

"Lindsie has been the constant target of lies, harassment and threats from her family. As a result, she has distanced herself from the Chrisley family since 2017," it continues. "She would like to thank all of her fans and supporters. The circumstances that Todd and Julie find themselves in, is quite unfortunate."

Todd and Julie's son Chase also appeared to take a jab at his half-sister on Twitter. "Blood is deadly. Don't be jealous because you don't have s**t going on and never will," he posted. "A wise man once said 'the one with the gold rules,' well you have nothing and have started a war that is un winnable for you." 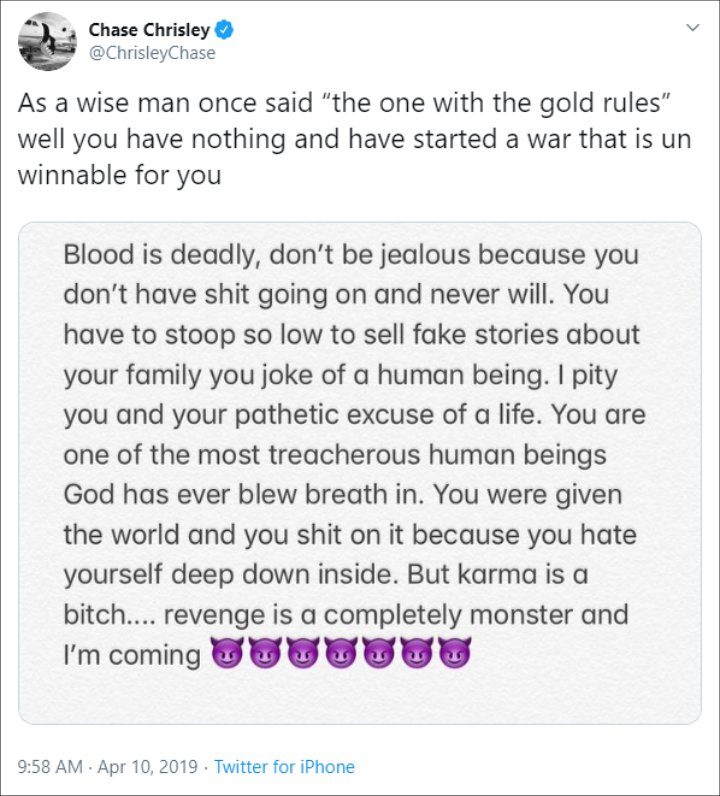 Chase Chrisley takes a jab at his half-sister Lindsie.

Seemingly responding to Chase's tweet, Lindsie posted a cryptic statement on her own Twitter account. "Don't be afraid for being outnumbered. Eagles fly alone. Pigeons flock together, " she wrote on Wednesday, August 14.

Todd and his wife Julie, who also have a daughter, Savannah Chrisley, and another son, Grayson Chrisley, were indicted on 12 counts of conspiracy, bank fraud, wire fraud and tax evasion on Tuesday. They turned themselves in on Wednesday and pleaded not guilty to all charges during their arraignment.

They were subsequently released after posting a $100,000 unsecured bond each. That means they'd only have to pay if they fail to show up for court dates. They were additionally asked to surrender their passports and are only allowed to travel to the Atlanta area and parts of Tennessee. They, however, can travel to California to tape their reality show "Chrisley Knows Best" with prior notice to their probation officers.

'AGT' Live Results Recap: Find Out Who Are Advancing to the Semi-Finals