Chrissy Teigen Bites Back When Apologizing for Spoiling 'The Voice' Winner

The 'Lip Sync Battle' co-host has been met with backlash after she tweeted a video of her husband John Legend celebrating with Season 16 champion Maelyn Jarmon at the finale.

AceShowbiz - John Legend's wife Chrissy Teigen has apologised to fans after tweeting the winner of "The Voice" on Tuesday night, May 21.

The "All of Me" singer acted as a judge on the U.S. TV show for the first time this year, and emerged victorious during the finale on Tuesday with his act Maelyn Jarmon.

Following the win, Chrissy shared a video of John and Maelyn celebrating, and tweeted: "this is literally the happiest I've ever seen John ever????" 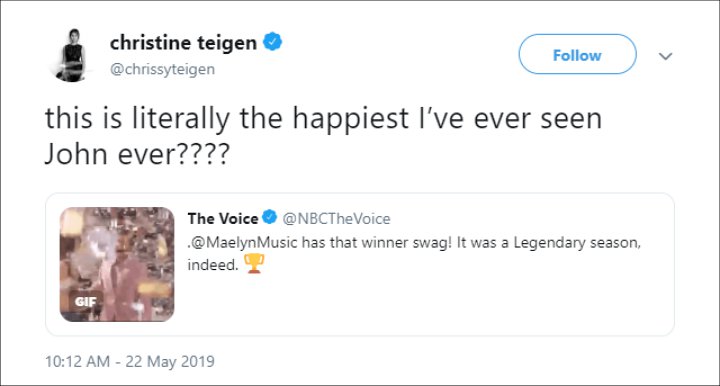 Chrissy Teigen showed in a tweet that she was happy for John.

After her tweet, many of Chrissy's followers slammed her for revealing the winner before they'd had chance to watch the finale, with the author and presenter later commenting: "truly sorry for spoiling the voice tonight. I thought that since the official account tweeted it, it would be okay. But now I realise it wasn't and will make sure that when my husband wins something with someone, I will wait for each state and every country before being excited." 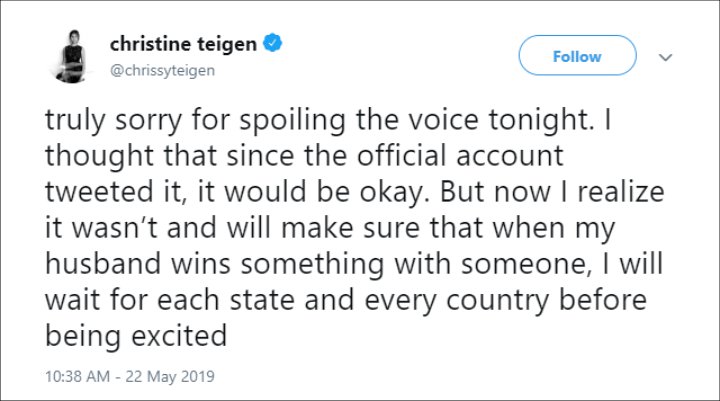 She apologized for spoiling the winner of the current season of 'The Voice'.

She then added: "Well it looks like we are now being penalised for my spoiler and the award has been taken away and given to Carson Daly. Again I apologise."

The model joked in her response to the backlash.

Despite Chrissy's slip-up, John also tweeted about his victory - albeit slightly later than his wife.

"So happy for @MaelynMusic! She is the Voice!!! Thanks to everyone who voted for her!!!" he wrote. 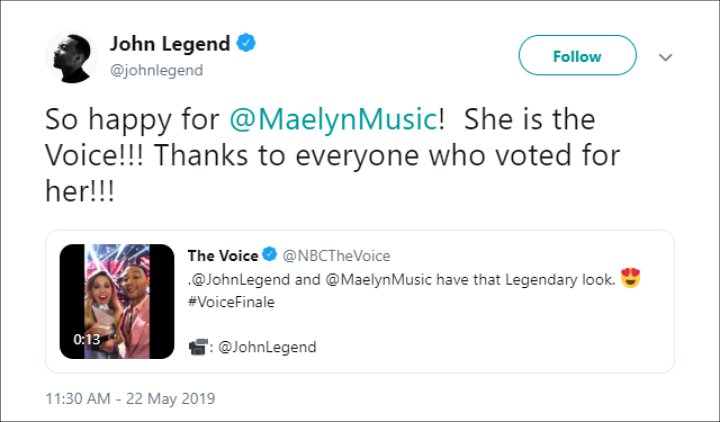 John Legend also took to Twitter to congratulate the winner.

The finale also saw performances from a host of famous faces, including BTS (Bangtan Boys), the Jonas Brothers, Halsey, OneRepublic, Hootie & The Blowfish and Taylor Swift and Brendon Urie, who performed their tune "ME!".