Oops! The Most Awkward Celebrity Moments on Red Carpet

While some of them are able to laugh off the awkwardness, some are visibly appalled or even mad when unexpected things ruin their moments.

AceShowbiz - Award season is something that many people, including celebrities, are waiting for. In addition to hoping they will be going home with a trophy in hand, celebrities take the award season as an opportunity to perfectly flaunt their best fashion while gracing the red carpet.

It's normal for us to see celebrities looking their best on the red carpet, talking to news outlets and posing for pictures, though there are several cases where they are caught in rather awkward moments.

While some of them are able to laugh off the awkwardness, some are visibly shocked or even mad when unexpected things ruin their moments. A celebrity even had to deal with a creep while posing for photos with fellow stars.

Here are some moments where celebrities' red carpet moments take a shocking turn. 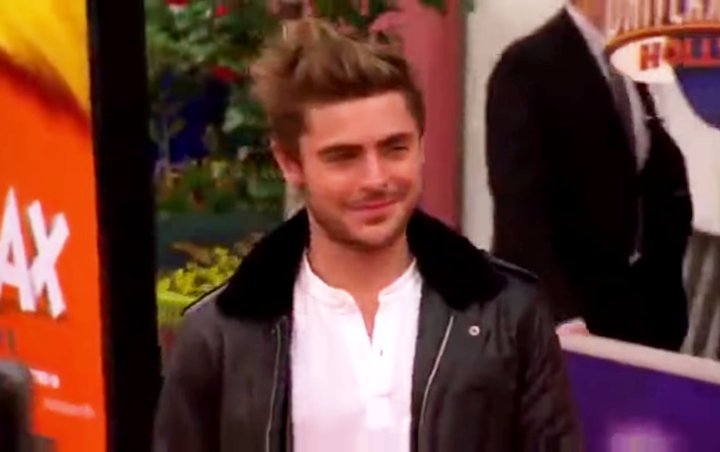 While attending a big event, you are bound to meet some other stunning celebrities and maybe if you're lucky, you'll hook up with one of them. And for that possibility, Zac Efron is well-prepared.

While attending the premiere of "The Lorax" back in 2012, the "The Greatest Showman" actor had an embarrassing moment when he accidentally dropped a condom on the red carpet. Zac, however, handled the situation in a lighthearted manner as he was seen having a little giggle. He turned away from the paparazzi after swiftly retrieving the condom, stuffing it in his pocket.

During his appearance on "Today", the "High School Musical" star told then-host Matt Lauer, "I never really had a pocket checking policy before going on the red carpet before, but now we've fully instated one." The host then said that it was better to be safe than sorry, to which Zac responded, "Yes. It's a great message to add to the many messages in the film." 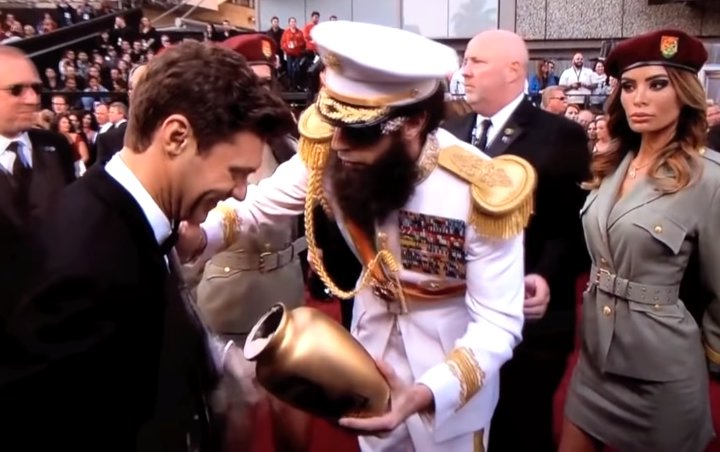 The 2012 Oscars might be one that Ryan Seacrest couldn't forget. The "American Idol" host interviewed a slew of A-listers on the carpet, but Sacha Baron Cohen surely was the one that made a lasting impression on him.

The movie mogul arrived in his character from "The Dictator" and carried around the "ashes of Kim Jong-Il" as a way to criticize Academy for the lack of diversity. During his interview with Ryan, however, he decided to pull a prank on the host as he threw the ashes all over Ryan's Burberry suit.

Ryan was visibly shocked and upset at that time, and the irritation was seemingly still there at least until the next four years. The "Live with Kelly and Ryan" co-host snubbed Sacha and his wife Isla Fisher during the 2016 Oscars. He reportedly said, "no," and turned his back when Cohen and his wife Isla walked past. 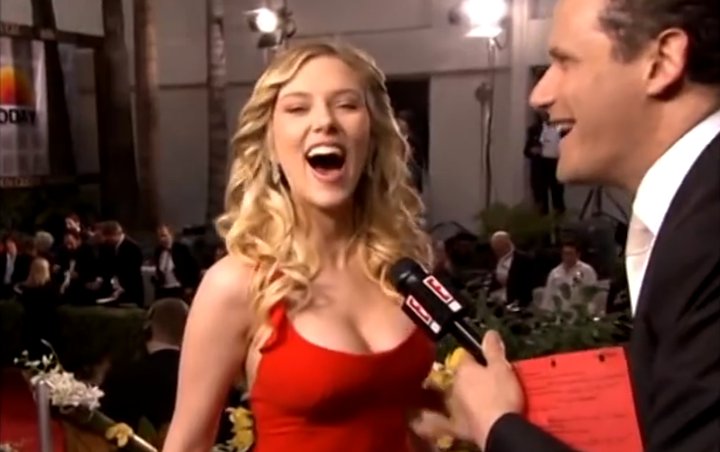 Isaac Mizrahi is a person who won't walk away without his curiousty solved. That was what happened on the red carpet of the 63rd Golden Globes in 2006. The openly gay fashion designer interviewed Scarlett Johansson, who stunned in her clingy, red Valentino gown.

During the interview, Isaac asked the "March Point" actress if she was wearing a bra or not, and Scarlett said, "It's all built in. That's the Valentino way."

However, Isaac decided to prove it himself as he gave the young movie star's left breast a squeeze. The actress could be seen laughing nervously while asking what was going on. "I just wanna feel it," Isaac said, adding, "Oh, that’s totally working." He then cheered, "I touched Scarlett's boobs!"

In his defense, he claimed on "George Stroumboulopoulos Tonight" that "his wasn't nasty." Isaac said, "This was like, 'Are you wearing a bra? Are you wearing an underwire bra?' And she was like, 'Oh well.' I was like, 'Well, wait a minute, I just wanna...' [makes reaching motion]. And then she (went) 'Oh my God!' and it was like this crazy thing. It was on the cover of, like, this newspaper in India. In fittings I do that all the time. It's just a natural response. It's like a doctor going 'OK, cough.' " 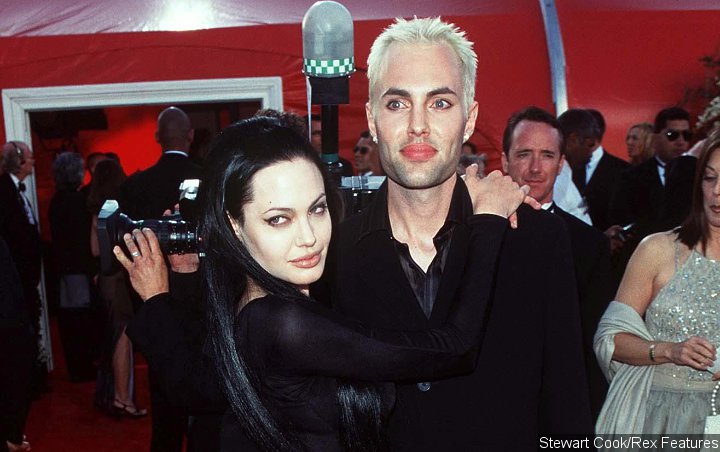 Angelina Jolie showed some brotherly love at the Vanity Fair Oscar Party in 2000. The actress, who won the Best Supporting Actress award for "Girl", kissed her brother James Haven on the lips that night, much to everyone's surprise.

The shocking kiss sparked incest rumors between the siblings. In addition, Angelina let the audience know that she was "so in love" with her brother during her acceptance speech.

However, Angelina's mom Marcheline's close friend Cis Rundle, who helped take care of the actress as a child, has opened up about the moment, giving more insight into what actually their relationship was. "The day she kissed Jamie at the Oscars, it was the first day Marcheline was treated for cancer. They left the hospital together and got ready together," she told Radar Online.

"Nobody in the world knew that they spent the day in the hospital. It was like, 'Look where we're at now.' But the world saw something incestual. It was meant to be 'Here we are.' They only ever had each other. They had a very tight relationship with each other and their mother," she added. 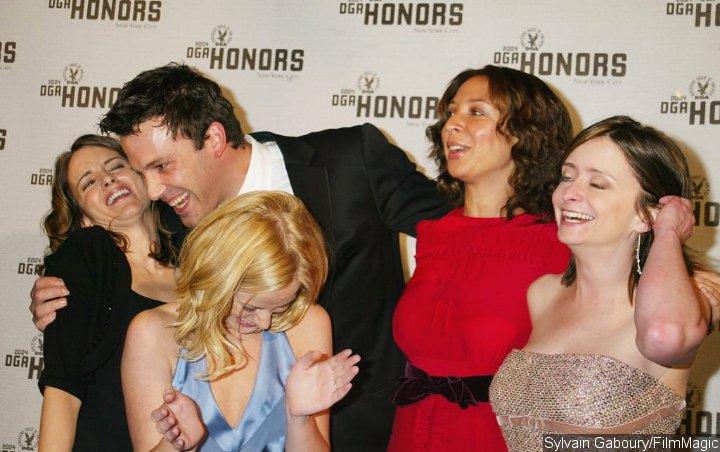 Ben Affleck is just trying to be friendly. The Batman depicter had an awkward moment when he posed for photos backstage at the 5th Annual Directors Guild Of America Honors in 2004 alongside Tina Fey, Amy Poehler, Maya Rudolph and Rachel Dratch.

Being the only man among the ladies, Ben looked like he was too excited at one point. He was photographed hugging comedian Tina so closely, but the latter apparently wanted some space from the "Gone Girl" actor.

While Tina and Ben's relationship was rather interesting, Ben's ex-wife Jennifer Garner revealed in a 2015 Vanity Fair interview that the comedienne was one of her favorites.

"When I can't sleep--and I am not someone who typically has that problem, but I really have in the last year--and I need something to switch my brain off, it has been Tina Fey and Amy Poehler," she said. "God bless those girls. I used to think I would never watch television on my phone, but there I am, because I am sleeping next to my daughter [Violet]." 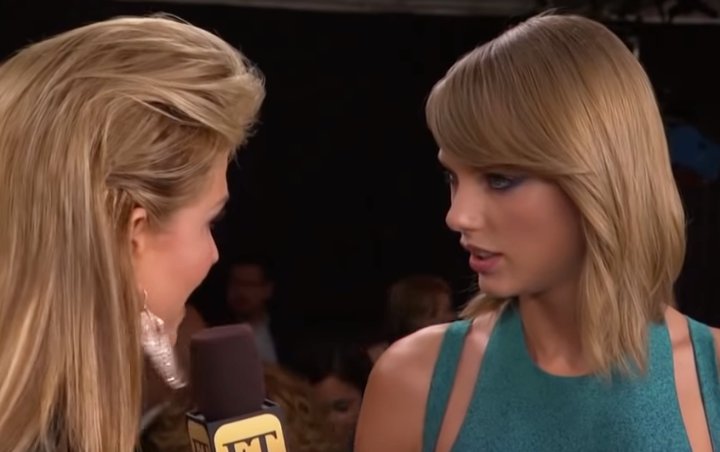 One wrong question and things went awkward. Taylor Swift and Nancy O'Dell's interview for ET at the 2015 Grammy Awards took an unexpected turn briefly after the latter asked her something that the "Blank Space" singer didn't appreciate.

During the interview, Tay might expect questions about her works but instead, Nancy alluded that she would get a hookup or more at the end of the award-giving event. "You're going to walk away with more than a trophy tonight, I think, lots of men," Nancy said to Taylor at the Los Angeles event.

The singer then gave the host a death stare before responding, "I'm not going to walk home with any men tonight." She added, "I'm going to hang out with my friends, and then I go home to the cats. Men get me into trouble!" 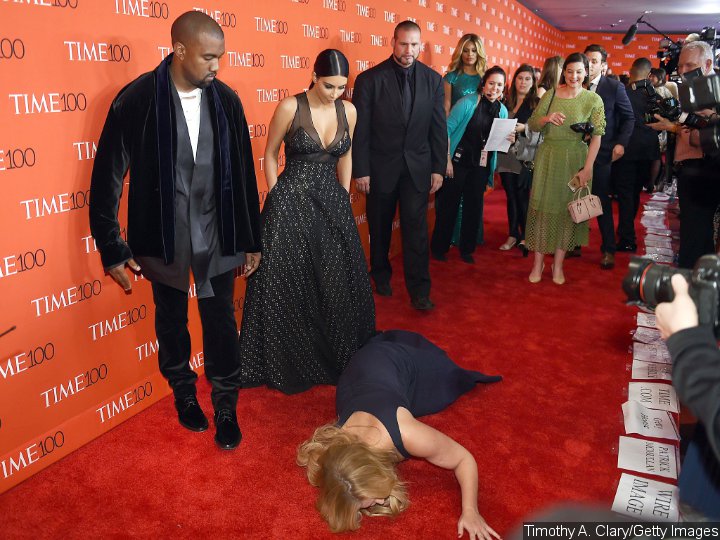 Amy Schumer created a buzz at the Time 100 "Most Influential People" red carpet in 2010. In addition to her, who was being honored for her show "Inside Amy Schumer", the star-studded event featured other A-listers including famous couple Kim Kardashian and Kanye West.

Probably wanting to take all the attention to herself, Amy decided to pull a stunt in front of KimYe by doing something no one could ever think of. One might think she would greet the couple when she approached them, but instead, she faked fall in front of them and everyone to see. KimYe, on the other hand, were photographed confused by the sudden act while walking her by.

But the comedian apparently didn't regret it even a bit. Telling Graham Norton, Amy said, "I think falling is the funniest thing, so I just took a dive in front of them. I'm doing God's work."

When asked if she made Kanye smile with her stunt, Amy shared that "he did not crack a smile at any point," though he did later in the evening when she met the couple inside the gala. "Kanye was smiling at me, but like as if you programmed a robot to smile," she shared. 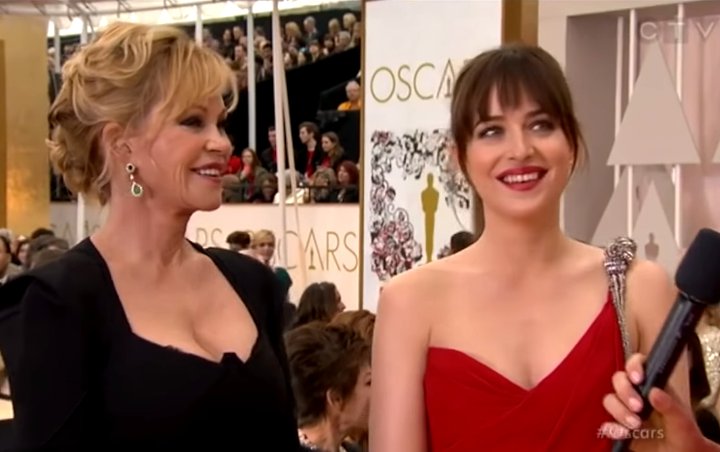 In some cases, moms have the ability to make things awkward and that was what happened when Dakota Johnson walked down the red carpet at the 2015 Academy Award alongside her actress mother Melanie Griffith.

The mother and daughter duo had a rather awkward moment during an interview with Lara Spencer. Asked if she had watched Dakota's R-rated flick "Fifty Shades of Grey", Melanie admitted, "No. Maybe one day."

She then said that she probably couldn't handle watching her daughter do some steamy scenes in the movie, in which Dakota played lead character Anastasia Steele. "I don't think I can, I think it would be strange. She's a really good actress, I don't need to see that to know how good she is," Melanie explained.

Dakota, though, begged to differ. "No, I don't think so, I think it's fine." She went on saying, " I think that one day you can see it, I think so." Following an apparent point of contention between them, the girlfriend of Chris Martin added, "All right! You don't have to see it. Jeez. I'm like, 'You can see it,' and you're just like, 'No.' " 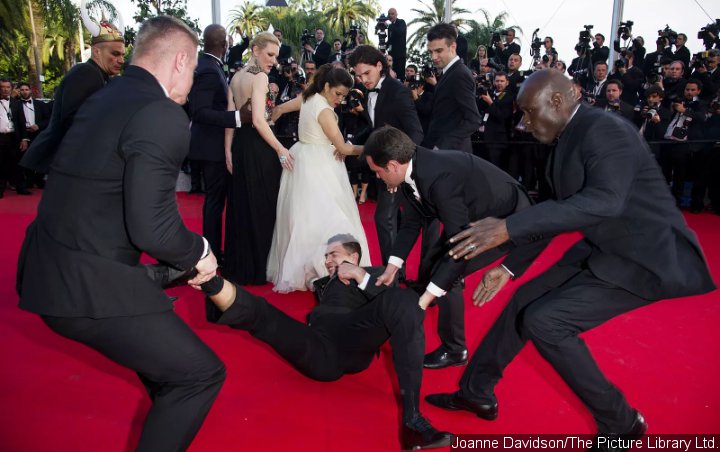 While the previous awkward moments are just plain awkward and embarrassing, this time it was borderline harassment. America Ferrera was left appalled after being violated by serial red carpet prankster Vitalii Sediuk.

Alongside her co-stars, America was posing for photos at the "How to Train Your Dragon 2" premiere at The Palais des Festivals when the pest ran onto the carpet. He then lied on the ground before putting his head under America's voluminous white dress.

Thankfully, it didn't happen for a long time because security quickly removed him from the scene. However, it didn't change the fact that the scare left the actress in a huge shock. Her co-stars including Kit Harington and Cate Blanchett also couldn't help but shoot a disgust look at the action. 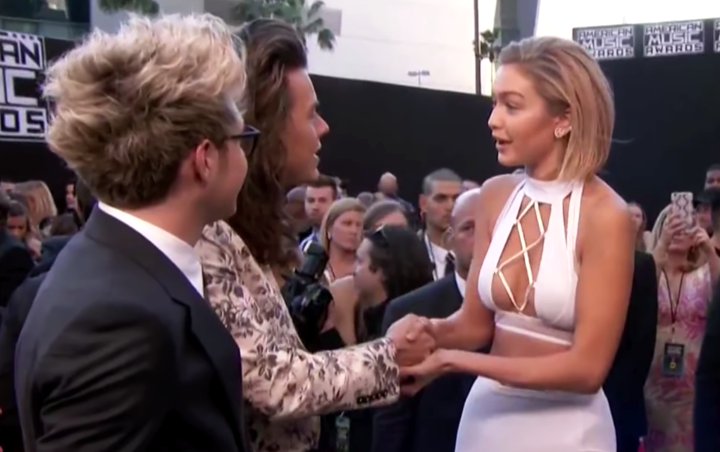 Gigi Hadid prove that she is a loyal friend to Taylor Swift. The Victoria's Secret model didn't seem too thrilled when she met Harry Styles, who dated Taylor, at the American Music Awards back in 2015. Gigi didn't even try to be subtle about it as she snubbed the singer.

The awkward encounter took place when E! host Giuliana Rancic decided to invite Gigi, who was nearby, to the stage as she was interviewing One Direction. Gigi then was welcomed by Harry, who donned his floral Gucci suit, but the former gave the "Sign of the Times" singer a cold shoulder.

She went to hug Harry's bandmates Niall Horan, Louis Tomlinson and Liam Payne. However, it seemed like she thought Harry only deserved a hand-shake. Well, that was awkward in Harry's side.

Report: Deathstroke and His Children Are Heading to 'Titans' Season 2