The 'Real Housewives of Beverly Hills' star strips down to nothing as she celebrates Playboy's return to nude pictorials.

AceShowbiz - Lisa Rinna is the biggest supporter of Playboy. On Sunday, February 19, the 53-year-old actress took to Instagram to support the magazine's decision to go back to nude pictorials by sharing her own naked picture.

The picture shows the naked "The Real Housewives of Beverly Hills" actress standing in front of a mirror and taking a mirror selfie with her mobile phone. Luckily, she doesn't forget to censor her breasts and hiding her lady part behind a chair before uploading it on Instagram. Rinna's body looks amazing with a flat stomach despite the fact that she's a mother of two and already a 53-year-old lady.

Along with the picture, she wrote, "It's back. I got scared then I said I'm 53 -- zero f**ks given! Congrats to @playboy for going back to nudes. The female body is so beautiful, every size and every age. Be proud! #thefemalebodyisbeautiful #allshapesandsizes #loveyourself #loveyourbody." 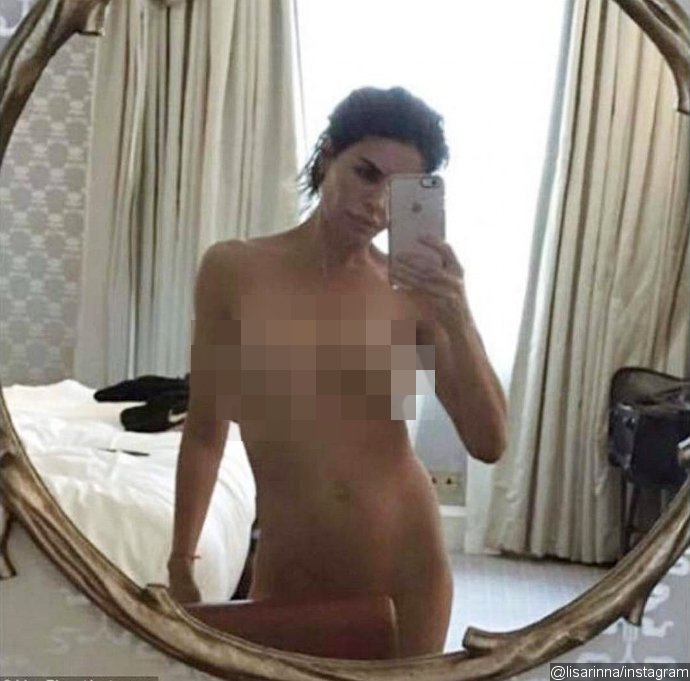 The picture garnered more than 6000 likes and the comment section was filled with Instagram users praising Rinna's body. A user wrote, "I didn't look that good at 27. You are very lucky indeed," while another one wrote, "I give you a great big hands up you go girl you look amazing I am so shy I could not do this!!"

Rinna has close connection to Playboy for a very long time. She once posed for Playboy in 1998 when she was 6 months pregnant with her now 18-year-old teen model daughter Delilah Hamlin. In 2009, Rinna returned to Playboy once again as a cover model.

Last week, Cooper Hefner, the son of Hugh Hefner, lifted the ban of nude pictorials in Playboy and decided to start it up again with a campaign, #NakedIsNormal. Cooper announced the news by posting his statement on Twitter which read, "l be the first to admit the way in which the magazine portrayed nudity was dated, but removing it entirely was a mistake. Nudity was never the problem, because nudity isn't a problem. Today, we're taking our identity back and rediscovering who we are."

Artist of the Week: Chance The Rapper