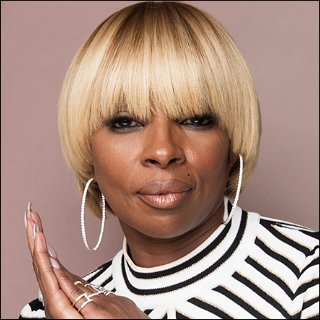 Gloriously billed to portray the legendary jazz artist %cNina Simone% in an upcoming project of Paramount Pictures/ MTV Films, Mary J. Blige brilliantly maintains her dominance in R&B/hip-hop soul scene as her seventh album, 'The Breakthrough' went straight to the top spot of The Billboard 200 right after its release on December 20, 2005. This attainment surely has turned out to be such a sweet proceeding of the Vlegend Award honor she was granted of at the 2005 Vibe Awards in November 2005. Set to appear on NBC's musical special of ï¿½%cJamie Foxx%: Unpredictableï¿½ aired on the network by January 25, 2006 along with %cStevie Wonder%, %cSnoop Dogg%, and %cThe Game%, the mesmerizing singer, therefore, has really accomplished her goal of establishing a fabulous career to undoubtedly become one of the substantial figures in American music industry.

Born on January 11, 1971 in the Bronx, New York as the youngest of two daughters of Cora and Thomas Blige, Mary Jane Blige had already faced a bitter life in her childhood when her father decided to leave the family by the time she turned 4. Her mother then took along the little girl and her older sister, %cLaTonya%, to Savannah, Georgia, before returned to New York to settle in Yonkers' Schlobam housing projects which was known for its crime, violence and drugs activities. It was during this tumultuous period that Mary began to develop a deep fondness, listening to hip-hop sounds as well as soaking up the musical influences of her mother's 70s soul collection of %cOtis Redding%, %cGladys Knight%, %cAl Green%, and %cDonny Hathaway%. Her knack in singing was quickly visible to everyone as she won a talent competition at the age of 7 upon performing %cAretha Franklin%'s "Respect."

Learned the basic of harmony through occasional visits to her musician father while also improved her singing technique in local church's choir, Mary, however, grew up to be a party girl in her teens, eventually quitted high school during her junior year. This idle life of her fortunately started to change when she played her stepfather a tape containing her rendition of %cAnita Baker%'s "Caught Up in the Rapture" she recorded casually in a karaoke booth at a Yonkers shopping mall. Sensing her potentiality, he quickly sent it to an acquaintance named %cJeff Redd%, an A&R scout for Uptown Records, who subsequently brought the tape to the label's president, %cAndre Harrell%. Impressed with Mary's talent, Harrell thus signed her in to sing backup for local acts, including that of %cFather MC% in his single entitled ï¿½I'll Do For You.ï¿½

The tune surprisingly turned out to be a hit across U.S. and consequently came to the attention of the new Uptown CEO named Sean ï¿½%cDiddy%ï¿½ Combs, who eagerly helped Mary to work on her own album which finally resulted in ï¿½What's the 411?ï¿½ released on July 28, 1992. A unique blend of soul and hip-hop, this first effort surprisingly gained positive response from both critics and the record-buying public, leading it to secure the top position on Billboard Top R&B/Hip-Hop Albums chart while also penetrated the top 10 of The Billboard 200. Two out of its 12 tracks, namely ï¿½Real Loveï¿½ and ï¿½You Remind Meï¿½, amazingly became number one on Billboard Hot R&B/Hip-Hop Singles & Tracks, subsequently boosted the sale of ï¿½What's the 411?ï¿½ to three million copies and unquestionably propelled Mary to wide public notice.

Applauded as the Queen of Hip-Hop Soul, Mary again scored similar success in 1994 with her sophomore work, ï¿½My Lifeï¿½, for the album followed the trail of its predecessor to sell for nearly three million copies and to take the first rank of Billboard Top R&B/Hip-Hop Albums charts. What was more, this piece of work satisfyingly made its way to be nominated for Best R&B Album category at the 1996 Grammy Awards along with another nomination in Best Rap Performance By A Duo Or Group through her 1995 collaboration with %cMethod Man% which she eventually won. Sadly for her, a difficult time afterwards approached in the preparation of her next album as Diddy concluded to end their ties to put concentration on establishing his own label, Bad Boy. Boldly taking the executive producer seat by herself, she then moved to MCA Records and contacted %cTerry Lewis%, %cR. Kelly%, plus %cBabyface% to help her producing the album.

Already invented what became known as "ghetto fabulous" music style through her mixture of hip-hop beats, street sensibility, soulful vocals and glamorous sophistication, Mary strengthened her position in American music industry with her third album, ï¿½Share My Worldï¿½, by 1997. A work of more polished R&B, it wonderfully strived to the top spot of The Billboard 200, the first time her album could accomplish such achievement, while also directed her to receive many accolades, especially an American Music Award for Favorite Soul/R&B Album and her second Grammy Awards' nomination of Best R&B Album category in 1998. Next came up with a live album entitled ï¿½The Tourï¿½ of which songs were recorded during her North America's Share My World Tour throughout 1997-1998, she launched her fourth studio album simply titled ï¿½Maryï¿½ on August 17 the following year.

Featured various celebrated artists, such as Aretha Franklin, %cLauryn Hill%, %cJadakiss%, %cEric Clapton%, and %cElton John%, ï¿½Maryï¿½ consequently became another success for Mary as it brought her to earn 3 Grammy Awards' nominations aside from many other prestigious honors she had also garnered. Unstoppable, she went on creating more sensation through her 2001 effort, ï¿½No More Dramaï¿½, in which one of its compositions, "Family Affair", turned out to be the number one hit song on five Billboard music charts, contributing highly to the album's sale of three million copies. Things really turned well for her by 2003 for she again scored great result through her sixth also her first piece of work under Geffen Records, ï¿½Love & Lifeï¿½, while finally found her true love in %cMartin Kendu Isaacs% whom she happily married on December 7.

Fantastically added 8 more nominations of Grammy Awards and won two of them by 2004, Mary continued to enhance her status as one of R&B/hip-hop soul divas when her next album, 'The Breakthrough' sold over 727,000 copies a week after being launched officially. Consequently became one of the top five biggest debuts of the year, the fifth largest-selling debut by a female artist and the highest first-week sales for an R&B solo female artist of all time, this record merely pointed out the brilliance of her talent also skills in both writing and singing tunes she consistently honed throughout her long career. The album delivered her a big winning at the 2007 Grammy Awards by taking 'Best Female R&B Vocal Performance', 'Best R&B Song' (both for 'Be Without You'), and 'Best R&B Album'.

While still enjoying the success of the latest piece, the next album work has taken place as early as 2007. Blige is set to release 'Growing Pains' on December 18.