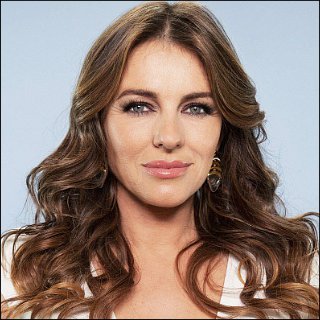 Successfully maintained a fine balance between her acting and modeling career to soar as a well-known British figure around the globe, Elizabeth Jane Hurley sure has created such a distinguished achievement that only few people of her ilk could match. A daughter of an army officer of Irish Catholic descent and elementary schoolteacher, Liz, so she is often called, was born the second child in the family on June 10, 1965 in Hampshire, England. Growing up in the suburb of Basingstoke, a large town in South East England region, the girl originally aspired to be a dancer and even attended a boarding school specialized in ballet training at the age of 12, but later eagerly shifted to acting upon taking theater courses aside from that of dance at the London Studio Center during her teens. A handful of theater works afterwards followed to then lead to her first film debut in %cBruce Beresford%'s segment of “Die tote Stadt” from “Aria” (1987), a collaborative feature consisting ten short pictures made by ten renowned directors.

Still struggled to build a decent acting career as she entered year 1988, Liz unexpectedly found herself stepping into another profession when she obtained a one-year modeling contract with a top London agency as a result of her triumph at an annual Face of the Year contest held in Winchester by local newspaper, the Winchester Extra. Though so, she delightfully stayed true to screen industry despite her new activities in modeling, continuously appearing in a series of films and TV productions for the rest of 1980s and early 1990s in which she finally made her way to enter Hollywood through %cWesley Snipes%' vehicle entitled “Passenger 57” (1992). This initial success satisfyingly was followed by her appointment to exclusively represent famed cosmetics company Estee Lauder in 1995, subsequently gained the blue-eyed beauty enough buzz to land second billing in “Austin Powers: International Man of Mystery” (1997).

As the action comedy flick wonderfully scored well in the box-office with domestic income of over 53 million U.S dollar, Liz's profile consequently received such huge boost that it unmistakably provided her a solid base to continue her path either in acting or modeling. Not only could secure more major roles in her subsequent pictures of “My Favorite Martian” (1999), “Bedazzled” (2000), plus “Serving Sara” (2002), she also landed lavish chance to grace the cover of various famed magazines which included Harpers Bazaar, Elle, Marie Claire, and Vogue during the time being, all certainly made her the household name in both fields. Afterwards crossed to thriller genre to film “Method” (2004) opposite %cJeremy Sisto% then established her beachwear line called Elizabeth Hurley Beach in 2005, the road looks quite smooth for this striking brunette to undergo for she next was included in the high-profile cast of “The Last Guy on Earth” (2006) while became the face of Estee Lauder's ReNutriv Skin Care Line and French accessory house Lancel.

Aside from her successful modeling and acting career, Liz's love life also has been an interesting topic to circulate around numerous media, notably for her relationship with prominent British actor %cHugh Grant% whom she began dating in 1986. What people most remembered from their romance probably was Grant's case of cheating on her over a prostitute named Divine Brown in 1995 which really caused great shock to the stunning actress. Though the knot ultimately was broken in 2000, media reports continuously kept roaming around her, particularly after she gave birth to Damian Charles on April 4, 2002 and proved that her boyfriend of 2001, film producer %cSteve Bing%, is the father of her son through a DNA test after the man expressed his denial concerning the matter. The ruckus apparently did not hinder Liz to flourish another problematic love in 2003, this time in Indian textile mogul %cArun Nayar% whose estranged wife, Italian model %cValentina Pedroni%, once accused her of being the main cause of the crack in their marriage.

Living such a high profile and much publicized relationship, the pair secretly wed in a civil service at Sudeley Castle, in Gloucestershire, western England on March 2, 2007 with just a few family members and close friends for witnesses. Then held a blessing and party at the castle the next evening, the wedding festivities continued in Mumbai, India with the overall cost of the wedding is estimated at a total of Ł2 million. That's not all for Hurley also contracted an exclusive magazine deal with Hello!, selling the exclusive photo rights of her wedding for Ł2 to 5 million.