The 30-year-old rapper's gig took place early Friday morning, December 2 as Art Basel kicked off its annual weekend in the city and he was joined by his wife Cardi B.

AceShowbiz - Offset has hit the stage for the first time since Takeoff's passing. When performing at Miami club E11EVEN, the 30-year-old Georgia native set aside time to pay a tribute to his late cousin and Migos groupmate.

Offset's gig took place early Friday morning, December 2 as Art Basel kicked off its annual weekend in the city. "We're doing this for my brother," he told the crowd before performing "Bad and Boujee" and "Clout", according to Page Six. "For Takeoff, let's do this s**t."

His wife Cardi B was present at the party. A source told the outlet that the two "were dancing and drinking and having a great time." Chance the Rapper was also in attendance.

Offset has been having rough times since Takeoff was fatally shot on November 1 following an altercation at a club in Houston, Texas. Days earlier, his wife Cardi admitted that it was hard to make him happy again. "We living our life normally, but deep down inside our hearts have been so heavy," the femcee claimed in a since-deleted Twitter voice note.

"I feel like if I talk about the incident so desensitized, I feel like if we talk about how we really feel or what motherf**ckers really been going through, y'all will start saying, 'Oh, sympathy.' And we don't want no sympathy. We ain't no charity case," she added. "But no lie, I have been feeling so hopeless trying to make my husband happy."

"Trying to make him crack a smile," the femcee continued. "Seeing him randomly cry, see him trying to distract his mind completely, schedules been changing, trying to keep up with work after everything that he's been going through these past couple of weeks."

Offset and Hit-Boy Link Up for New Song '2 LIVE' 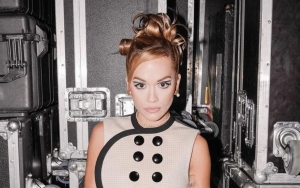