Further stressing his adoration for the infamous dictator, the rapper/designer also shares an apparent logo for his 2024 presidential campaign that is obviously a combination of Nazi's symbol and an anti-Semitism symbol.

AceShowbiz - Kanye West is making use of his Twitter account to call for world peace. Following his controversial interview with conspiracy theorist Alex Jones in which he professed his love for Adolf Hitler, the rapper/designer shared a prayer for world peace.

"A PRAYER FOR WORLD PEACE," so he began his message on Thursday, December 1. "Dear God, thank You for all creation. In the spirit of Jesus of Nazareth and all teachers of peace who inspire the many faith traditions, help me, and all the people of the world, learn how to replace hate, war, oppression, and division with love."

In a follow-up tweet, Ye also appeared to share new logo for his 2024 presidential campaign. Further stressing his adoration for the infamous Nazi leader, the logo is obviously a combination of Nazi's symbol and an anti-Semitism symbol. "YE24 LOVE EVERYONE #LOVESPEECH," so the Yeezy designer captioned the tweet.

Kanye West shared an apparent logo for his YE24 campaign.

Unsurprisingly, Ye received backlash over his new tweets. "Okay cool. FYI Hitler started WW2, a war in which 3.5% of the Earth's population died. So maybe pick a new role model," Van Lathan wrote in an Instagram comment. "He has to pick a side, can't want peace and constantly causing chaos," another user said.

"You can't pray for world peace and pray to God and in the same breath praise a man who is responsible for killing 12 million people," someone else similarly wrote. Another comment, meanwhile, read, "This isn't going to make anyone forget your Hitler comments."

Ye came under fire after he said that he has love for Hitler during his appearance on "Infowars". "I see good things about Hitler... every human being has something of value that they brought to the table, especially Hitler," the 45-year-old rapper said. "I do love Hitler, I do love the Zionists - I love everyone."

"The Jews... I love everyone, and the Jewish people are not going to tell me, 'You can love us and you can love what we are doing to you with the contracts, and you can love what we are pushing with the pornography', but this guy that invented highways, invented the very microphone that I use as a musician, you can't say out loud that this person ever did anything good and I am done with that. I am done with the classifications. Every human being has something of value that they brought to the table, especially Hitler," he continued.

When Alex added Kanye had a "Hitler fetish" and told him that he did not really like Nazis or Hitler, Ye responded, "I like Hitler... they (the Nazis) did good things too, we've got to stop dissing the Nazis all the time... the Jewish media has made us feel like the Nazis and Hitler have never offered anything of value to the world."

After the controversial statements, a number of celebrities spoke out against Kanye and antisemitism, denouncing his harmful rhetoric and his appearance on the podcast. In addition to Josh Gad, Judd Apatow condemned the hip-hop star as he tweeted, "Kanye literally became an a**hole." 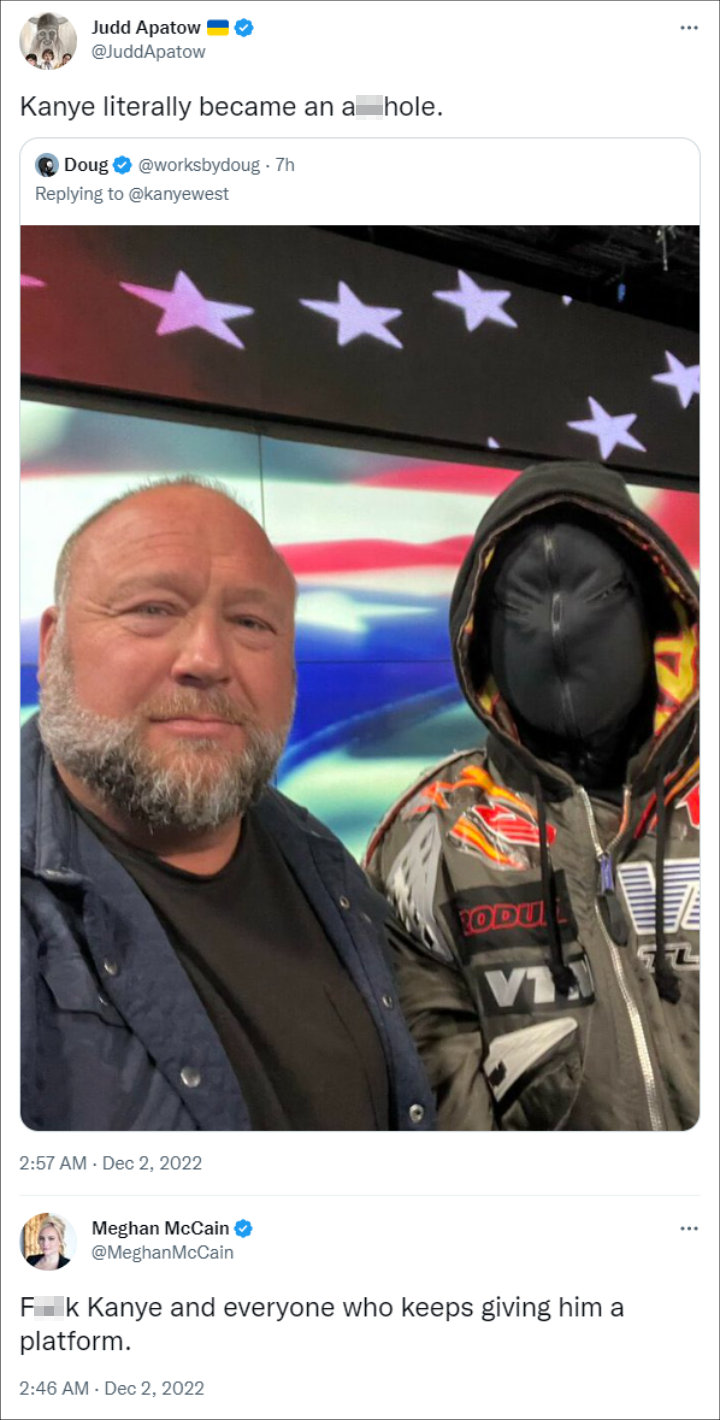 Former "The View" co-host Meghan McCain also called out people for giving the rapper a place to spew hateful rhetoric. "F**k Kanye and everyone who keeps giving him a platform," she tweeted.