The former 'One Tree Hill' actress calls the 'Fuller House' alum a 'bigot,' while Candace's former co-star Jodie Sweetin appears to shade her as she supports Jojo for calling out the devout Christian.

AceShowbiz - Candace Cameron Bure has found herself in the center of another controversy, months after she was exposed by Jojo Siwa as the "rudest celebrity." This time the actress landed in hot water for her conservative take on marriage, which didn't sit well with fellow actress Hilarie Burton as well as her enemy Jojo.

In an interview with The Wall Street Journal published on Monday, November 14, Candace was asked if the Great American Family (GAF), which she serves as the chief creative officer, will feature same-sex couples in its Christmas movies. "I think that Great American Family will keep traditional marriage at the core," she answered.

Meanwhile, Bill Abbott, the former Hallmark Channel CEO who now runs GAF, was more coy when addressing the same topic. "It's certainly the year 2022, so we're aware of the trends. There's no whiteboard that says, 'Yes, this' or 'No, we'll never go here,' " he said.

After learning of the interview, Hilarie took to Twitter to slam the "bigotry." She wrote, "Now they're just openly admitting their bigotry. I called this s**t out years ago when Abbott was at Hallmark. Glad they dumped him. Being LGBTQ isn't a 'trend'. That guy and his network are disgusting. You too Candy. There is nothing untraditional about same-sex couples." 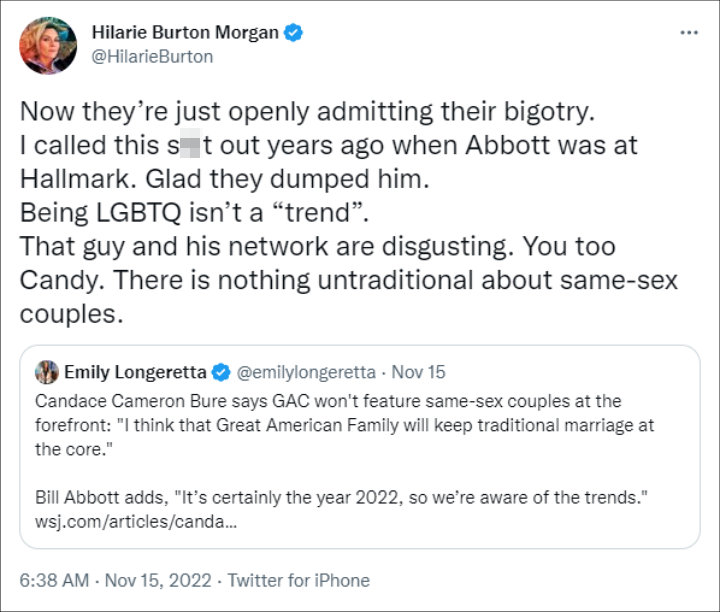 The "One Tree Hill" alum added in a separate tweet, "Bigot. I don't remember Jesus liking hypocrites like Candy. But sure. Make your money, honey. You ride that prejudice wave all the way to the bank." 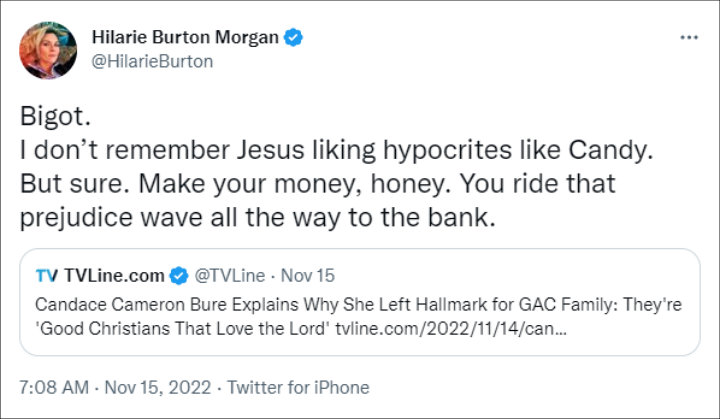 The former 'One Tree Hill' actress called the 'Full House' alum a 'bigot.'

Jojo, who came out as being part of the LGBTQ+ community in January 2021, also found Candace's comment "hurtful." She posted on Instagram a screenshot of a headline about the actress' comment.

"Honestly, I can't believe after everything that went down just a few months ago, that she would not only create a movie with intention of excluding LGBTQIA+, but then also talk about it in the press," she wrote in the caption. "This is rude and hurtful to a whole community of people."

Candace's "Full House" and "Fuller House" co-star Jodie Sweetin stood by Jojo and appeared to shade Candace as she commented on the YouTube star's post, "You know I love you."

However, some people slammed Jodie for throwing Candace under the bus after years of apparent friendship. "@jodiesweetin thought you a candace were friends. grew up together. but you still take the side of someone you barely know just because they have the same viewpoint as you," one critic said. Another added, "if there was a dislike button i'd press it on your comment."

Candace exited Hallmark in April after more than 10 years and 30 movies. She said when announcing her move to Great American Family, "I'm very excited to develop heartwarming family and faith-filled programming and make the kind of stories my family and I love to watch. GAC fits my brand perfectly; we share a vision of creating compelling wholesome content."