In a new episode of Hulu's 'The Kardashians', the reality TV star reveals that the basketball player, with whom she shares two children together, had proposed to her, only to get rejected.

AceShowbiz - Khloe Kardashian is not interested in walking down the aisle with Tristan Thompson. In a new episode of Hulu's "The Kardashians", the reality TV star revealed that the basketball player had proposed to her, only to get rejected.

Tristan apparently popped the question in December 2020. Explaining the reason why she turned down the proposal, Khloe shared in confessional, "I need to make sure this is a totally different relationship because I want to be proud to say I'm engaged to anyone." She continued, "And that's why I said I'm not comfortable accepting this right now because I'm not excited to tell my family."

The "Revenge Body with Khloe Kardashian" alum, who didn't tell anyone on her family about the proposal until sister Kim Kardashian confronted her, continued, "As hurtful as that probably was for him to hear it was the truth. I'm not ever gonna accept something and give someone false hope."

In the Thursday, September 29 episode, Kim shared that she only found out about the proposal when Tristan told her. "The fact that he proposed and you never told us, and I asked him months later," Kim said to Khloe during a conversation. The SKIMS founder continued, "I asked him months later, the night after I thought it happened, and he's like, 'Oh, I did it months ago. She didn't tell you guys?' "

Kim detailed in confessional that that the NBA free agent called her to share his Valentine's Day 2021 proposal plan. "Which was like a year since they had drama," the mom of four noted. "And then I called him the day after and I was like, 'Hey, I never heard anything from Khloe. Oh my god, did you propose?' And he was like, 'Oh yeah, I did in December.' "

That aside, the episode saw the Kardashian-Jenner family trying to figure out how to help Khloe as she's still reeling from finding out that her on-and-off boyfriend not only cheated on her again but also impregnated another woman while pushing Khloe to have a baby via surrogate. "I don't know if I'm strong," Khloe lamented. "I'm literally just numb to all this s**t, like how much can people take?"

Tristan confirmed that he has fathered Maralee Nichols' son Theo in January. "I take full responsibility for my actions," Tristan wrote on his Instagram Story at the time. "Now that paternity has been established I look forward to amicably raising our son. I sincerely apologize to everyone I've hurt or disappointed throughout this ordeal both publicly and privately."

In the meantime, Khloe noted that the birth of her son gave her strength. "Now that my son is here, I get to move on and I get to enjoy," she shared during season 2 premiere of "The Kardashians". "It's almost like I get to close that chapter and be done with this trauma and put it behind me." 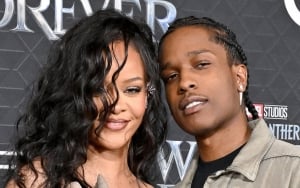