Following the 'Criminal Minds' star's interview about the 'House of Hammer' docuseries, Effie, who first spoke on Armie's alleged sexual misconduct, exposes the actress for allegedly pressuring her to press charges against Armie.

AceShowbiz - Elizabeth Chambers, who has spoken up on her support for her ex Armie Hammer amid his healing in the wake of rape allegations against him, has been accused of plotting with one of his accusers to hurt him. In a shocking plot twist, the actress allegedly tried to work with Effie to take her estranged husband down.

Following Elizabeth's interview about the "House of Hammer" docuseries, Effie, the woman behind House of Effie Instagram account which first leveled the sexual misconduct claims against Armie, exposed the actress for allegedly plotting to get the full custody of her two children by pressuring Effie to press charges against Armie.

On Wednesday, September 21, Effie unleashed a series of screenshots of text messages purportedly sent by Elizabeth to her. "I'm obtaining a copy of the NDA he used and think there's an error in it, which would make it null and void. As soon as I confirm, can you post?" Elizabeth allegedly wrote in one of the messages.

The Food Network star allegedly told Effie, "I really need custody of my precious children." She appeared to pressure her as asking, "Do you think you could make a declaration this week? It will all be private..." Elizabeth seemingly encouraged Effie to "stay focused" on "getting the stories on record. Not just the internet." 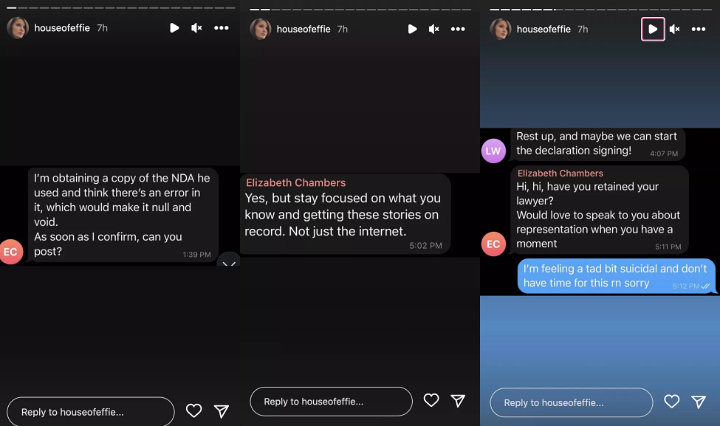 When Elizabeth asked if she's hired a lawyer, Effie replied, "I'm feeling a tad bit suicidal and don't have time for this rn sorry." Elizabeth allegedly responded, "I don't want to pressure you, but your insight is much more in depth than the others we have."

In a separate Story, Effie wrote, "Just some things to keep in mind before anyone else keeps wishing rapists 'healing'." 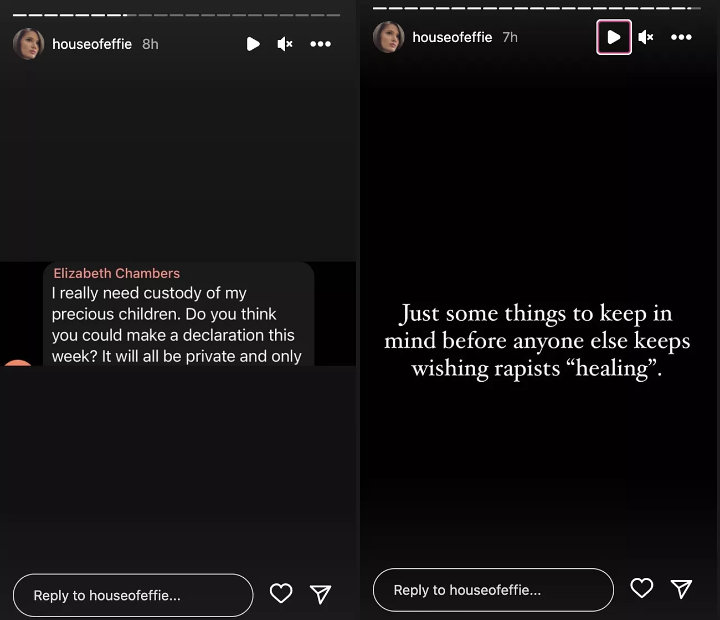 Effie posted the Stories after Elizabeth said she and her family are in the process of healing following Armie's scandal. She said of the Discovery+ docuseries that details the Hammer family and the actor's infidelity, "I did not plan on seeing it, but I did drop the kids off at school one day and came home and watched it with my support system around me."

"It was obviously heartbreaking on so many levels and very painful. But at the same time, it exists," the 40-year-old mother of two added. "The past is the past and all we can do is take this as a moment to learn and listen, and hopefully process and heal in every capacity."

Slamming Elizabeth for the E! News interview, Effie told Page Six in a statement on Thursday, "It's unfortunate that Elizabeth, like the producers of 'House of Hammer', is looking to profit from others' trauma. She can't call herself a feminist when her 'best friend' is an abuser. The ones who need healing are the victims - not the abusers."

Elizabeth filed for divorce from Armie in the wake of the sexual misconduct allegations against him, but it has not been finalized.