Ryan shows support to his wife Maren for speaking up against Brittany's alleged transphobic remarks, while Jason calls the 'American Idol' alum 'MY Barbie!!'

AceShowbiz - Ryan Hurd and Jason Aldean have jumped in on Maren Morris and Brittany Aldean a.k.a. Brittany Kerr's online feud. Both country music crooners have shown support for their respective wives following their back-and-forth over Brittany's alleged transphobic remarks.

Ryan took to Twitter to express his support to his wife. "I always support and love Maren," he wrote in his Twitter thread. "I know I'm sparse in the internet but I am proud of her and always will be. For everything she stands for, I do too. Ready to get some rest together and enjoy our little kid. Hope everyone has a fantastic weekend."

Agreeing with his wife, the "Chasing After You" hitmaker wrote in a separate tweet, "Scoring quick points by picking on trans kids isn't something that is brave at all. And I'm proud of Maren for sticking up for them. Badge of honor to have CO engage in completely normal discourse, too. Shut up and sing only applies to those who you disagree with."

He further clapped back at the haters, "Getting a lot of people telling me our career is over, as if the last time she spoke up about something it disappeared. Honestly, we're pretty ok over here. Tours are good, got a 2 year old we love, we're f**king fine, and I promise she isn't going to shut up now." 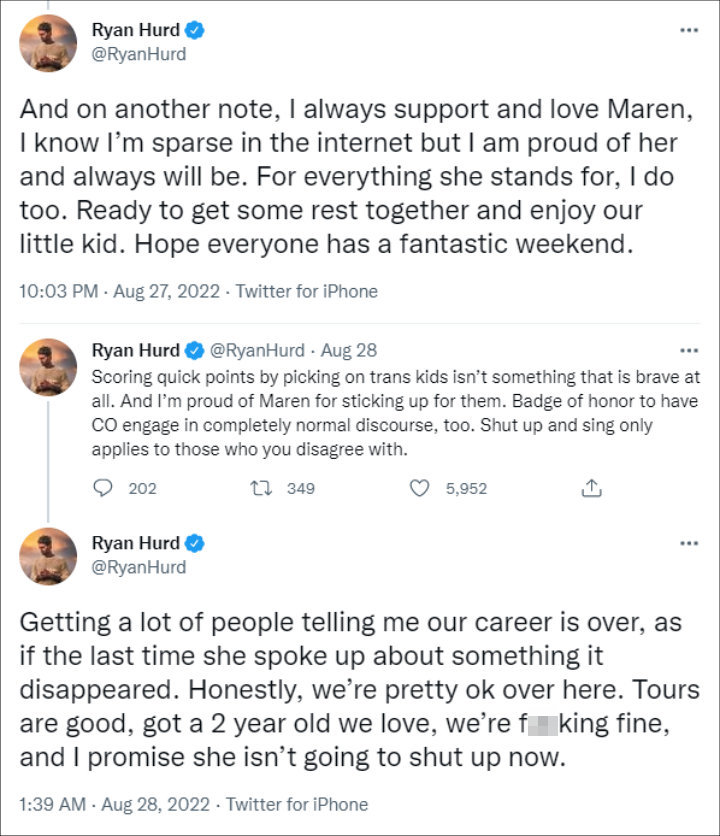 Meanwhile, Jason stood by his wife Brittany as he commented on her Instagram post by writing, "MY Barbie!!" alluding to Maren's diss. In the post, the former "American Idol" contestant shared a picture of her with a caption that read, "I love y'all, that's all."

Things got tense between Maren and Brittany after the latter posted a video showing her before and after glam-up. In the accompanying message, she penned, "I'd really like to thank my parents for not changing my gender when I went through my tomboy phase. I love this girly life."

The message didn't sit well with Maren, who quickly wrote, "It's so easy to, like, not be a scumbag human? Sell your clip-ins and zip it, Insurrection Barbie," without naming Brittany. She also traded shots on Twitter with Candace Owens, who apparently took Brittany's side.

Cassadee Pope also took issue with Brittany's remarks. "You'd think celebs with beauty brands would see the positives in including LGBTQ+ people in their messaging. But instead here we are, hearing someone compare their 'tomboy phase' to someone wanting to transition. Real nice," she slammed Jason's wife.

Brittany later accused Cassadee of "advocating for the genital mutilation of children." She added, "Some parents want to be accepted by society so badly that they're willing to make life-altering decisions for their children who aren't old enough to fully comprehend the consequences of their actions." Brittany also fired back at Maren by writing, "Karen Morris. Thanks for calling me Barbie."

Cassadee hit back by sharing a photo of her smiling deviously. "POV: Knowing you got under someone's skin you don't like in the first place [crying laughing emoji]," the former winner of "The Voice" captioned it.