Weeks after being rumored to be dating Yung Miami, the 'Bad Boy for Life' hitmaker proudly gives his followers 'a whole entire drip' of his former fling, noting that he 'definitely got good taste.'

AceShowbiz - Diddy a.k.a. P. Diddy couldn't get enough of his baby mama Sarah Chapman. In a new social media post, the "Bad Boy for Life" hitmaker proudly showed off his former fling at his daughter's birthday party.

On Thursday, July 21, the hip-hop mogul made use of his Instagram Story to share a clip of him admiring Sarah. While flaunting Sarah's stunning physique, he said, "I wan't y'all to get a whole entire drip [of] this gorgeous, beautiful."

The "I Need a Girl" rapper continued gushing over Sarah as saying, "I definitely got good taste." Sarah, who smiled at the camera after turning around her body, then replied, "I'm shy. You know I'm shy."

While celebrating Chance Combs' 16th birthday, Diddy looked dapper in a plain white shirt which he paired with black trousers. He also wore black sunglasses. As for Sarah, she donned a patterned crop-top and a matching midi skirt. She looked elegant with minimal makeup and a high sleek ponytail.

Both Diddy and Sarah were all smiles during the celebration. At one point, the proud parents could be seen planting sweet kisses on Chance's cheek as the birthday girl, who wore an off-shoulder polka dot dress, blew out the candles. 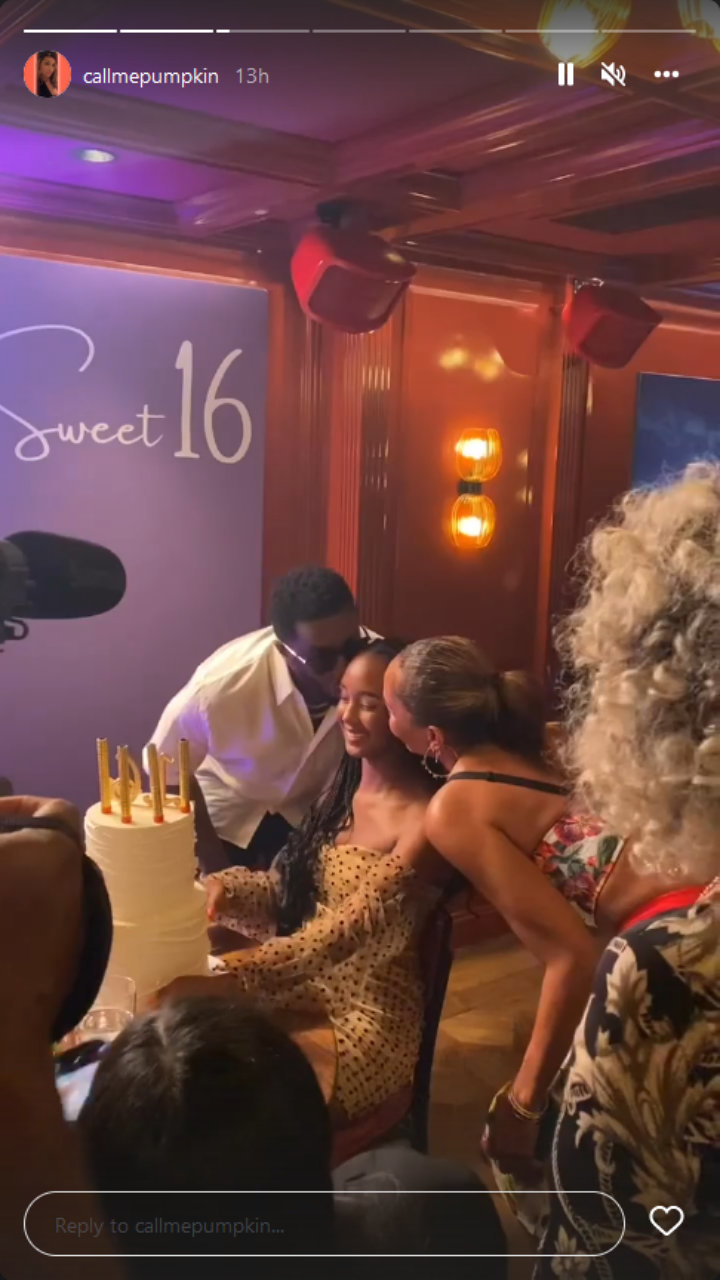 The clip came a month after Diddy and Yung Miami went back and forth about their relationship status. The two rap stars apparently took pride in being single despite recently seemingly confirming that they're dating.

On June 17, Diddy and Yung Miami went on Instagram Live, showing their closeness as they had a light talk. "We got people dancin' some more. You know, we need to dance. We need a good bop," Diddy said in a circulating clip.

Yung Miami, who had her hair being done by a stylist, replied, "So, you back in your bop? The bop is back." He said that she of course knows that, before adding that she was on "Caresha Please" mode. Diddy noted that he wasn't interested in being interviewed and wanted her to speak to him like she usually does, while calling her a "friend."

"Who you talkin' to?" Yung Miami seemingly asked for clarification. Diddy responded, "I'm talkin' to you!" After the playful exchange, Miami revealed she was preparing for her concert later in the evening. The two decided it was "shot-o-clock" so they took a drink.

Yung Miami then said, "We gotta take a shot for our exes," while raising her glass. "Yeah, shot for our exes," Diddy echoed her statement. "We're single as a mother**ker," he then exclaimed, which was repeated by the City Girls star. "Single is free," he sang, before she stressed, "Cheers to f**king single."

Previously, Diddy made conflicting remarks about their relationship status when appearing on Yung Miami's new podcast series "Caresha Please". "I'm single," the 52-year-old rapper first declared. "But I'm dating, I'm just taking my time with life. To be honest, just after my loss, losing [Kim Porter], losing Cassie, romantically I needed a time out. I just needed to be single and to be free."

Yung Miami later demanded a clarification. "So what we is?" she pressed Diddy, who responded, "We date. We're dating. We go have dates, we're friends." He further dished, "We go to exotic locations. We have great times."

Macklemore Reflects on His Success on New Single 'Chant' ft. Tones and I