Marking one year since he underwent chemotherapy to fight stage 4 diffuse large B-cell lymphoma, the Blink-182 bassist expresses his gratitude on Instagram Story after declared cancer-free.

AceShowbiz - Mark Hoppus is "grateful" to be alive one year after starting chemotherapy. The Blink-182 bassist, who announced back in June 2021 that he was undergoing treatment for cancer, marked one year since treatment began as he prepared to attend the wedding of his bandmate Travis Barker to reality star Kourtney Kardashian in Italy.

"A year ago I was in chemotherapy. Today I'm here," the 50-year-old musician, who was declared cancer-free just months after coming forward about his treatment, wrote on Instagram. "Grateful." 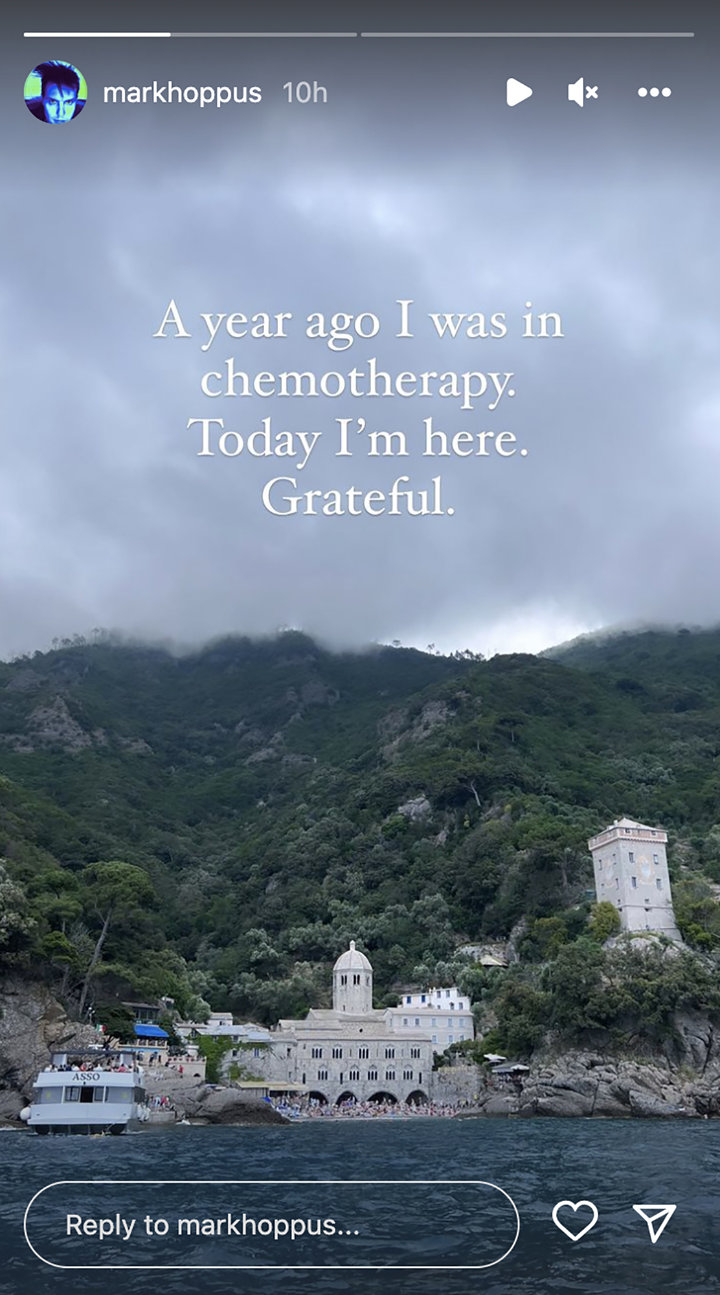 Mark Hoppus looked back on his cancer battle.

Mark, who is married to Skye Hoppus and has 19-year-old son Jack with her, announced that he is cancer free back in September 2021. At the time, he said, "Thank you God and universe and family and friends and everyone who sent support and kindness and love."

The "I Miss You" rocker additionally noted, "Still have to get scanned every six months and it'll take me until the end of the year to get back to normal but today is an amazing day and I feel so blessed."

Just months earlier, Mark revealed that he was battling stage 4 diffuse large B-cell lymphoma on Twitter. At the time, he stated that he felt "blessed" to be working with "incredible" medical staff to fight it even though he was "scared."

He tweeted, "I have cancer. It sucks and I'm scared, and at the same time I'm blessed with incredible doctors and family and friends to get me through this. My cancer's not bone-related, it's blood-related. My blood is trying to kill me!"

In December that same year, Mark confessed to GQ that his initial cancer announcement on social media was a total accident. He recalled thinking that his Instagram Story was for "close friends." He realized the mistake after he received a concerned text from his manager and radio stations started calling.

"Throughout the day as I'm getting chemotherapy and more bags of chemicals are being dropped into my body, other people are reaching out and they're like, 'Dude, what's going on?' " the rocker recalled what went through his mind. "Chemo is like being on the worst international, overnight flight where you can't sleep or get comfortable."

"I felt so s**tty. And the brain fog is so bad. The chemo brain is just heartbreaking to me because I can feel myself diminished mentally right now," he went on. "Maybe part of me subconsciously posted it to my main, but I definitely didn't do it on purpose. But I don't know. It kind of felt like a Band-Aid had been ripped off and I was able to be honest with people."