YBN Nahmir Blames Alcohol Addiction for Making Him Push 'Away' His Loved Ones: 'I'm Sorry'

When opening up about his struggle with alcohol addiction on social media, the 'Rubbin Off the Paint' rapper admits that he 'never knew addiction was this hard.'

AceShowbiz - YBN Nahmir has gotten candid about his alcohol addiction. Taking to his social media account, the "Rubbin Off the Paint" rapper blamed the addiction for making him push away people he "cares about."

"Alright y'all, I feel like it's best for me to just get this out my system. For 3 years I've been struggling with an alcoholic addiction," the 22-year-old hip-hop artist tweeted on Monday, March 21. "I've changed so much due to it, & not in the right ways. I've pushed so many of my love [sic] ones away & the people I care about because of it."

Nahmir, whose real name is Nicholas Alexander Simmons, further explained that he's "constantly tried to slow down / stop [himself] from drinking, but it's not easy at all." The "Opp Stoppa" emcee added, "This year I want a new challenge & the challenge is for me to get clean. I never knew addiction was this hard. Before hand it was easy for me to block it out, but now it's taking a toll."

"It's just been a lot going on in my life behind close doors that I leave off the internet," Nahmir continued in a separate Twitter post. He then told his followers that "the only thing [he] wanna do now in life is get help, therapy or even rehab," before noting that he wants "to feel like [himself] again & get [his] family back." He also said "sorry," before admitting that he "slipped."

"If you're struggling with addiction it's best to seek help. That's all I'm trying to do," Nahmir stated. "I use to think this was just some 'normal s**t' until I realized I'm NOT THE SAME ANYMORE. S**t is one of the worst feelings ever." 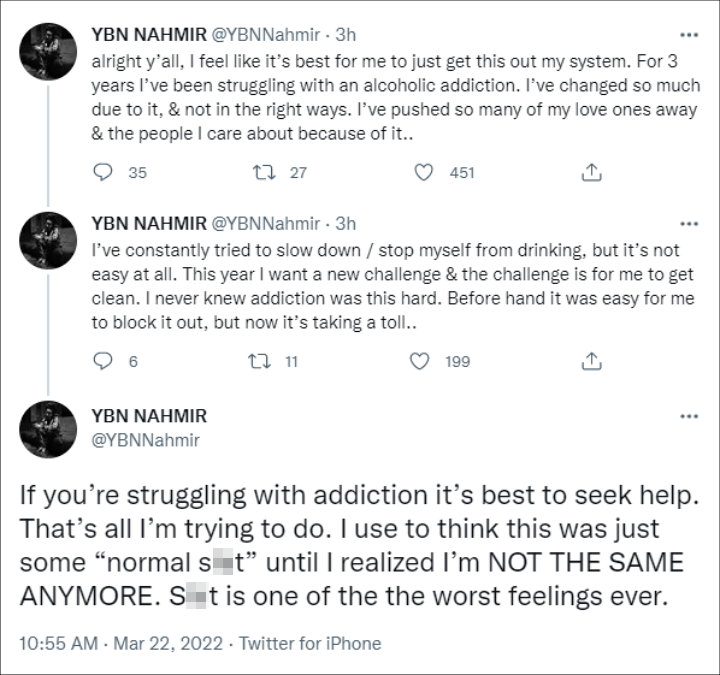 Nahmir's Twitter posts have since been flooded with supportive messages from his fans and followers. "Glad you're able to notice and trying to make a change brodie. You got this gang!" one person cheered on him. Another said, "Its never easy to get through addiction bro, only way to beat it is by staying strong and putting the effort to quit and fix relationships with thoses, who you tarnished. Good luck with recovery if thats what you decide to do."

"Proud of you for acknowledging that and wanting to get help [red heart emoji] you got this," a separate fan chimed in. Someone else replied to his tweets, "Keep your head up bro. You are strong I know you got this, and if you feel like rehab is your best option, we're going to support you through it."

Christina Ricci Joins Netflix's 'The Addams Family' Reboot, But With a Twist