When unveiling that she won't be attending the ceremony, the lead actress of the Oscar-nominated film says that she hopes 'some last minute miracle occurs' so she can celebrate the film in person.

AceShowbiz - Rachel Zegler has opened up about her feelings upon learning that she's not invited to the 2022 Oscars. When revealing that she won't be attending the award-giving event, the lead actress of Oscar-nominated film "West Side Story" said that she's "disappointed."

On Sunday, March 20, the 20-year-old star claimed via Instagram that she didn't receive an invitation to the annual ceremony, which is set to take place on Sunday, March 27 in Los Angeles with Regina Hall, Amy Schumer and Wanda Sykes serving as hosts. After a fan commented on her post that he/she can't wait to see what she'll be wearing on Oscar night, the "Shazam! Fury of the Gods" actress wrote, "I'm not invited so sweatpants and my boyfriend's flannel."

"Idk y'all, I have tried it all, but it doesn't seem to be happening," Rachel, who is currently shooting Mark Webb's "Snow White" in London, continued, hinting that she had tried to obtain a ticket. She added, "I will root for 'West Side Story' from my couch and be proud of the work we so tirelessly did three years ago. I hope some last minute miracle occurs and I can celebrate our film in person, but hey, that's how it goes sometimes, I guess. Thanks for all the shock and outrage. I'm disappointed too. But that's okay. So proud of our movie."

After many of her fans expressed dismay on social media, Rachel took to Twitter to thank her fans for their support. "My goodness, folks!! appreciate all the support, i really really do," she tweeted. "We live in such unprecedented times, and a lot of work behind the scenes goes into making movie magic happen."

"That goes for film productions (like the one I am so lucky to be currently shooting in london) and awards shows alike," Rachel continued. "Let's all just respect the process and i'll get off my phone x R." 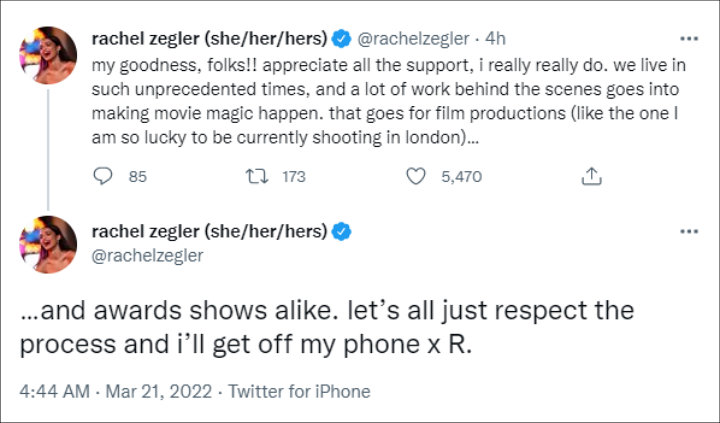 Rachel Zegler thanked fans for their support after she said she's 'disappointed' for not being invited to the 2022 Oscars.

A source told E! News that movie studios are given an allotment of tickets to the Oscars, which means it would have been up to the team at Disney-owned 20th Century Studios, the production company behind "West Side Story", to extend Rachel an invite. The source added, "It would be different if she was a nominee and or a presenter."

Last month, the Academy announced a reduction in seating capacity for the venue, the Dolby Theatre, due to COVID-19. According to Variety, the organization also scrapped its annual ticket lottery in an effort to limit the number of attendees.

Steven Spielberg Swears Off Directing Another Musical After 'West Side Story'