The Emmy Award-nominated actor takes to his Twitter account to slam people who have 'unsolicited comments' on his actress wife's or '*anybody* else's body.'

AceShowbiz - Jason Ritter is rallying behind his wife, Melanie Lynskey. The Emmy Award-nominated actor defended his wife against body-shamers in a cheeky statement on January 29.

Jason took to his Twitter account to quote-retweet Melanie's post which saw her calling out some haters. "If anyone has any further unsolicited comments about *anybody* else's body, they can feel free to write them in permanent ink onto their own foreheads and swan dive directly into the sun," he wrote on the blue-bird app. 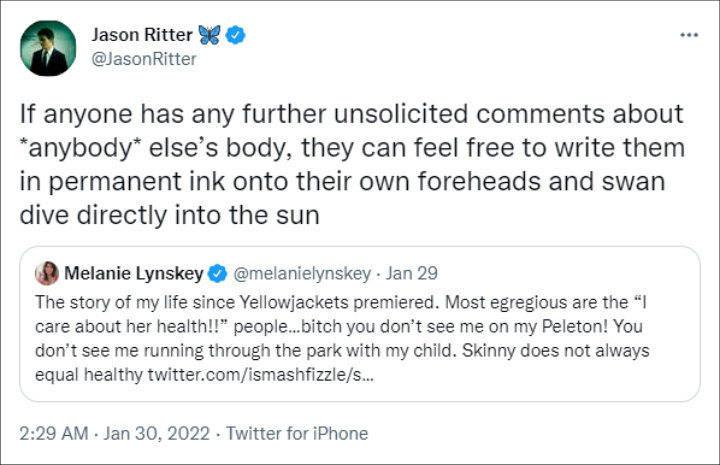 Jason's post arrived after Melanie clapped back at critics who made negative comments on her body after "Yellowjackets" premiered in November 2021. "Most egregious are the 'I care about her health!!' people… b***h you don't see me on my Peloton! You don't see me running through the park with my child," the actress wrote on the platform.

Prior to this, Melanie revealed that she was body-shamed on the set of the Showtime series. In an interview with Rolling Stone, she shared that a member of the production criticized her physical appearance. "They were asking me, 'What do you plan to do? I'm sure the producers will get you a trainer. They'd love to help you with this,' " she alleged.

Thankfully, her co-stars, including Christina Ricci, Juliette Lewis and Tawny Cypress, jumped to her defense. Melanie said that they showed support for her with Juliette even writing a letter to the producers on Melanie's behalf.

The interview also saw Melanie discussing the criticism of her character Shauna for hooking up with a younger man, mysterious, curly-haired artist Adam (Peter Gadiot). "I'm just like, 'Wow, really? That's where people's heads are at, that the most important thing is being thin or young?' " the 41-year-old New Zealand native wondered. "It was really important to me for [Shauna] to not ever comment on my body, to not have me putting a dress on and being like, 'I wish I looked a bit better.' "

Rick Ross Disappointed After Being Denied Entry Into Buckingham Palace