Many people on Twitter lust over the 'Kiss Me Thru the Phone' rapper's explicit photos, with one writing, 'Soulja boy was the first rapper to have a big d**k.'

AceShowbiz - Soulja Boy couldn't care less about his leaked NSFW photos. After someone unleashed his nude photos from his OnlyFans account, the "Kiss Me Thru the Phone" rapper promoted his page on the platform instead.

Making use of Twitter on Thursday, January 13, the 31-year-old emcee greeted his online devotees. "Good morning," he said, before putting the link to his OnlyFans account, "onlyfans.com/souljaboy." 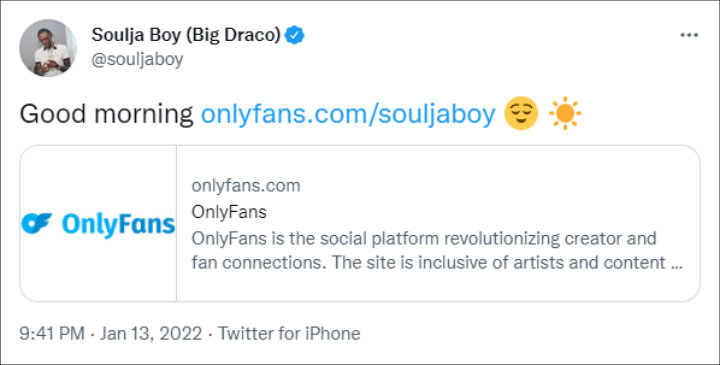 This arrived after someone shared photos of Soulja's private area, prompting the rapper to become trending on Twitter. After online user lusted over the photos, the hip-hop star set aside time to retweet the thirsty posts.

"Know wonder why Soulja boy named big Draco," one person wrote, with another echoing, "Wait a damn minute Soulja Boy, I see why your name is Big Draco." An individual gushed, "Now i see why soulja boy just be doing wtf ever he want."

A different user joined in by tweeting, "Aye is Soulja boy still looking for a Soulja Girlllll ?! Cause Babyeee." Someone else chimed in, "Soulja boy was the first rapper to have a big d**k." One person added, That picture I just seen of @souljaboy , yea I'll kiss it through the phone fasho."

Although he's known for his social media antics, Soulja has other things to offer to his fans. The Chicago native has been busy working on his new REVOLT series "The Life of Draco", which will premiere later this month.

Speaking about the show, Soulja told HipHopDX, "It's going down... I can't wait." He added, "Everybody been reacting so good off of my interviews, my Instagram Lives, my YouTube blogs - the reception just been so good. I was like, 'Man, yo, we need to turn this into something for the people to see.' And I also wanted to show behind the scenes of really what go on."

Soulja Boy Accuses Twitch of Racism, Threatens to Sue After Being Banned Twice