The cold open of a new episode of NBC's 'Saturday Night Live' also tackles #FreeBritney theme in the wake of ending of Britney Spears' 13-year conservatorship.

AceShowbiz - "Saturday Night Live" tackled Ted Cruz's controversial comments on "Sesame Street" character Big Bird in its Saturday, November 13 episode. In the cold open, the cast members mocked the senator, who criticized the fictional character for getting the COVID-19 vaccine.

Aidy Bryant reprised her role as the Texas senator. "You know, for 50 years, I stood by as 'Sesame Street' taught our children dangerous ideas like numbers and kindness," so Bryant's Cruz said. "But when Big Bird told children to get vaccinated against a deadly disease, I said, 'Enough,' and I created my own 'Sesame Street' called 'Cruz Street.' It's a gated community where kids are safe from the woke government."

"As you know, I was mocked for attacking Big Bird on Twitter, simply because I am a human senator and he is an eight-foot-tall fictional bird. But let’s see what happened to Big Bird after he got the vaccine," he continued ranting.

Big Bird, played by cast member Kyle Mooney, then appeared and said, "Oh man. I don't feel too good," to which Cruz asked, "So this is what happened to you a week after you got the vaccine?"

"It sure is. My feathers fell out. My nuts got huge. And my joints don't work. It's real bad man," so Big Bird replied. Cruz responded, "Don't worry. I read online that you can take a bath in Borax, and that will cleanse you of any nanotechnology."

Cruz received backlash after he blasted Big Bird, who announced earlier this month on Twitter that it got vaccinated. "I got the COVID-19 vaccine today! My wing is feeling a little sore, but it'll give my body an extra protective boost that keeps me and others healthy," the yellow big bird wrote.

The senator quickly caught wind of the "propaganda" tweet and responded, "Government propaganda…for your 5 year old!" 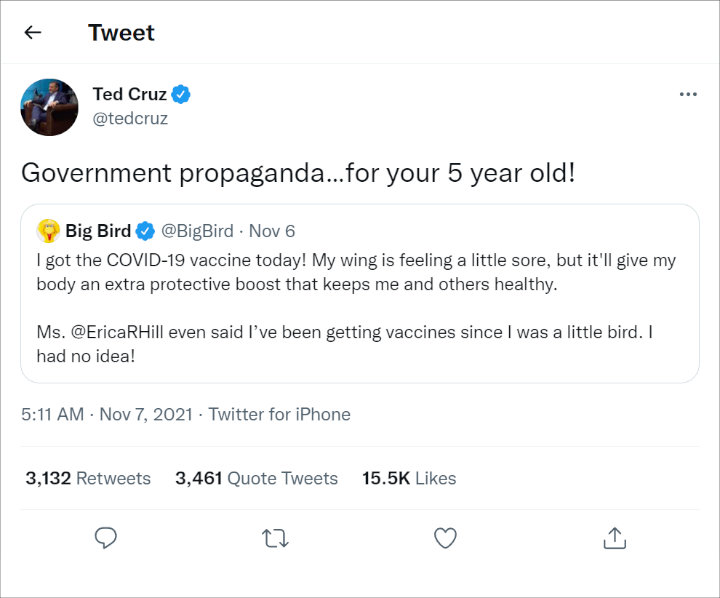 The cold open also tackled #FreeBritney in the wake of ending of Britney Spears' conservatorship. "And don’t forget about our word of the day…Freedom with Miss Britney Spears,” Bryant's Cruz motioned before Chloe Fineman's Spears appeared in a pink bandage dress. "Oh my god you guys, we did it," she said while twirling around.