AceShowbiz - Katie Thurston makes sure fans know that sometimes they are reading into things too much. The former "The Bachelorette" star is forced to clarify about the status of her relationship with fiance Blake Moynes.

On Friday, October 15, Katie took to her Twitter account to shut down speculations that there might be trouble in paradise between her and Blake. She shared on the blue bird app a screenshot of a fan commenting on Instagram, "You and Blake are not liking each other's posts. Is all OK?"

In response to the question, the 30-year-old said, "Imagine your fiance has been on his stories for weeks in Kenya working his a** off and yet this is what some people notice." She also added a laughing face emoji. 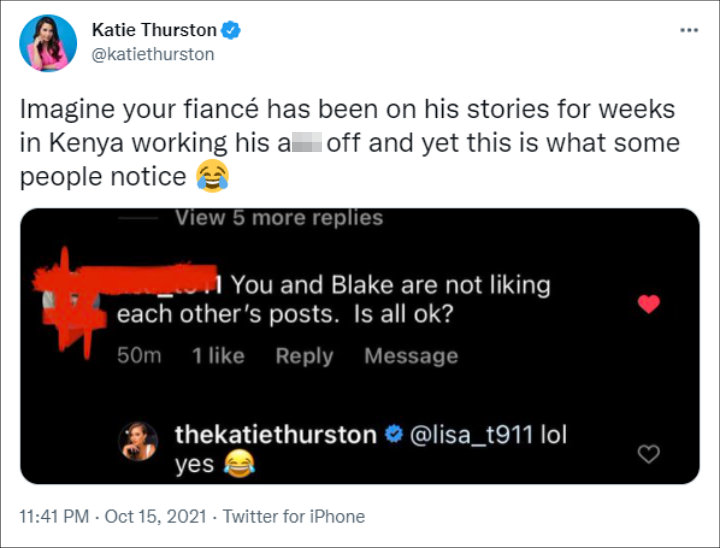 Katie Thurston shut down a fan's speculation about her and Blake Moynes' relationship.
See also...

Someone else then referred to recent speculation about "Bachelor in Paradise" couple Caelynn Miller-Keyes and Dean Unglert. "This is basically what bachelor reddit is like. They noticed a few weeks ago Dean and Caelynn didn't follow each other but fun fact … they've never followed each other lmao," the user wrote, and Katie responded, "Hahahahaha amazing."

One person also defended the former bank marketing manager as writing, "S**t, my husband hasn't even made an instagram to like my posts... is he cheating? Should I ask him to get an instagram and divorce him if he says no??" The reality TV star jokingly tweeted back, "Sounds like he doesn’t love you. The least he could do is a reshare on Facebook."

Katie and Blake got engaged during season 17 of "The Bachelorette". In an interview back in August, Blake shared that they will have a long-distance relationship for the foreseeable future.

"We need to see each other's lifestyles and our passions, our interests, and then try to see where our anchor spot will be, where all those things can kind of align and make sense for both of us," Blake explained. "We're going to jump around for a bit and experience what works best for us."

Diana Rigg Not Afraid of Death During Cancer Battle

Offset Makes Fan Cry After Paying for Her Items in Target