BIA Reacts to Backlash Over Her BET Hip-Hop Awards Performance

Fans quickly praises the 'Whole Lotta Money' musician for her response to the criticism of her set at the award-giving with one fans saying, 'Wish everyone had this attitude.'

AceShowbiz - BIA has responded to the criticism surrounding her performance at the BET Hip-Hop Awards which aired on Tuesday night, October 5. In a series of Twitter posts, the "Whole Lotta Money" raptres addressed the backlash that she received following the award-giving event.

Following her performance at the BET Hip-Hop Awards, many took to the comment section of the YouTube video of her performing "Whole Lotta Money" and "BIA BIA" with Lil Jon to say that her set was "boring" and "dry." Another person said, "She has a lullaby voice." Meanwhile, another comment read, "This looks like an open mic night performance."

Insinuating that people were just jealous of her, the musician said, "It's giving I wish it was me lol." She went on to write in another tweet, "One thing about me…I'm always gonna stay grateful, and perfect my craft. Thanks for the constructive criticism! I take it all in and come back harder next time."

She also noted, "Y'all are really weird and jealous of other peoples success and I hate that for y'all." 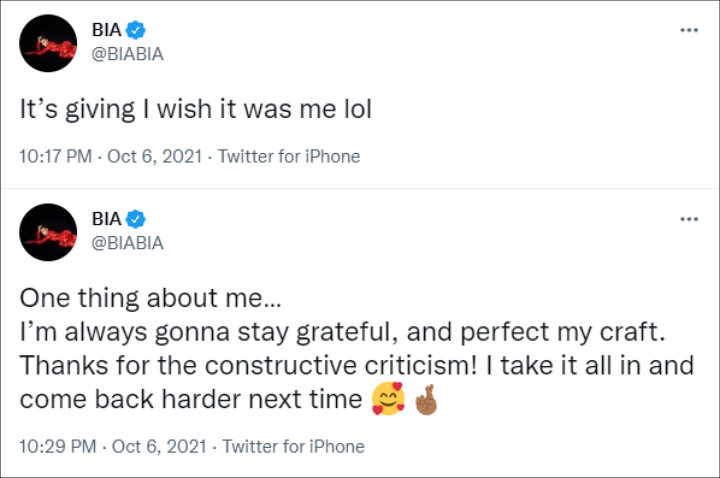 BIA responded to the criticism surrounding her performance at the BET Hip-Hop Awards.

Fans quickly praised her for her response. "Wish everyone had this attitude. I respect this, some of them would come online and cuss," one person raved. Another user wrote, "You're only gonna get better! Especially with this good attitude," while someone else added, "this is what i like to hear! love this for you! follow back queen!!"

"I can appreciate accepting feedback and planning to grow as an artist. We need more of that," another tweet read. One user commented, "People are just very rude and wouldn't even have the guts to do what you do either so also fuck em. Respectfully."

The criticism doesn't stop BIA from making music as she recently collaborated with T-Pain on his song "I Like Dat" featuring Kehlani. She also released her song "Besito" featuring G. Herbo (Lil Herb). The musician is also embarking on a 17-city tour with Don Toliver.

BIA on Criticism Over Her MTV VMAs Look: 'I Don't Need My A** and Titties Out' to Feel Sexy