Revealing that he filmed the clip right before performing at the Miami music festival, the rapper says he decided to release it because it 'touches on EVERY controversial topic trending in the headlines.'

AceShowbiz - DaBaBy knows how to make money from his recent controversy. The rapper, who has drawn criticism over his homophobic remarks made on the stage of Rolling Loud, addressed the issue once again with "Giving What It's Supposed To Give" music video.

The self-directed music video was released on Wednesday, July 28. In one scene, the 29-year-old MC can be seen holding up a sign that says "AIDS" before shooting two arguing men as he raps, "We like AIDS, I'm on your a**."

The clip ends with a message, "Don't Fight Hate With Hate," which is written in a rainbow font. The note is then followed with a non-apologetic statement that reads, "My apologies for being me the same way you want the freedom to be you."

On Instagram, DaBaby revealed that he filmed the music video just right before his performance at Rolling Loud. "You ever wrote a video, you and 3 others produce it, you direct it while starring AND rapping in it, film the video for 16 HOURS straight wrap up at 4am, take a shower & jump on a jet to @rollingloud," he detailed.

"And with only 2 hours of rest give one of the BEST performances of the entire festival yet the most controversial and emotion provoking performance as well," he bragged. "Due to things deemed 'insensitive' said during your performance even though you're an ENTERTAINER, try to apologize and explain that you meant no harm & that you were only entertaining as you are paid to do, & have no problem with anyone's sexual preference that is outside of yours."

"[Having] everybody around you panicking only for you to apologize… stand on the fact that you were entertaining and truly didn't mean to offend anybody," he added. "COINCIDENTALLY the video you were shooting till 4am the DAY OF @rollingloud touches on EVERY controversial topic trending in the headlines, so you then go against the grain in the opposite direction of every scared person around you & stay true to yourself & DROP DAT B**H in the height of the commotion & show the world once again that you CANT BE F**KED WIT? I have. I just did. God's Work."

DaBaby has sparked backlash for his comments during his set at the Rolling Loud Festival. "If you didn't show up today with HIV, AIDS, or any of them deadly sexually transmitted diseases, that'll make you die in two to three weeks, then put your cellphone lighter up… Fellas, if you ain't sucking d**k in the parking lot, put your cellphone lighter up," he shouted at that time.

Although he already issued apology to HIV/AIDS survivors, DaBaby refused to apologize for his offensive remark regarding LGBTQ+ community. "Anybody who done ever been effected by AIDS/HIV y'all got the right to be upset, what I said was insensitive even though I have no intentions on offending anybody. So my apologies," he tweeted. "But the LGBT community... I ain't trippin on y'all, do you. y'all business is y'all business." 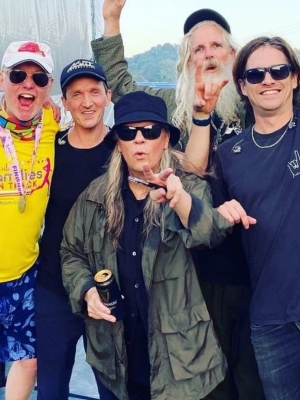