Doubting the autheticity of the note, Janice McAfee points out several things that make her believe that John didn't write that note before he was found dead last month in a Spanish prison.

AceShowbiz - John McAfee's wife has reacted to speculations regarding the death of the software mogul, who was found dead last month in a Spanish prison. Making use of her Twitter account, Janice McAfee shared John's alleged suicide note which she deemed fake.

Doubting the autheticity of the note, Janice wrote on the blue bird app, "Here is the alleged suicide note found in John's pocket. This note does not sound anything like someone who has no hope and is contemplating ending their life." Instead, Janice noted that "this note sounds like one of John's tweets." 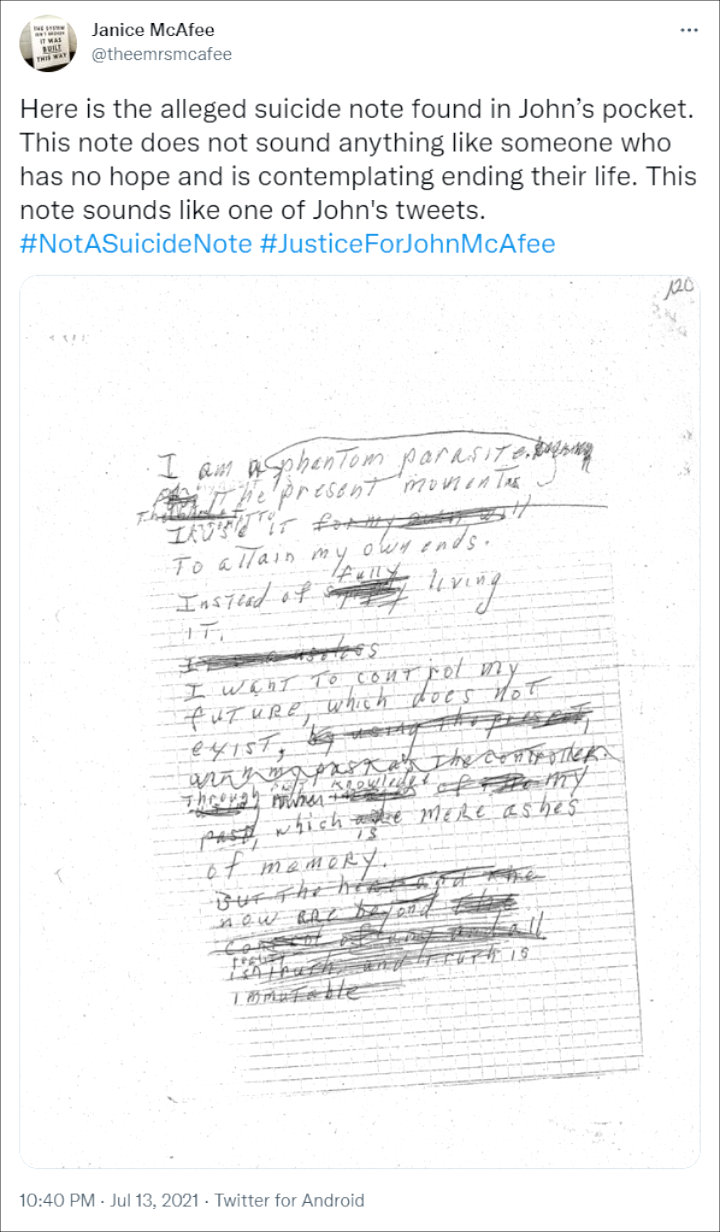 In a separate tweet, Janice said, "The handwriting is suspect & I doubt the authenticity of the note. It reads more like someone trying to imitate John's style of tweeting. And if this note was found in his pocket where are the markings of the note being folded into his pocket?" Doubling down on her statement, Janice added hashtags #NotASuicideNote and #JusticeForJohnMcAfee at the end of the tweets.

In the note, it could be seen that there were multiple words which were crossed out. "I am a phantom parasite," the note read. "I want to control my future, which does not exist."

John was found dead inside his cell on June 23 at a detention facility where he was awaiting extradition to the U.S. following tax fraud charges. His death was ruled as a suicide, but some people doubted it.

Last year, John tweeted, "Know that if I hang myself, a la Epstein, it will be no fault of mine." He was referring to disgraced financer and convicted sex offender Jeffrey Epstein, who was found dead in his Metropolitan Correctional Center, New York jail cell. While the New York City medical examiner ruled Epstein's death a suicide by hanging, some people believed that Jeffrey was murdered.

Janice also didn't think that John's death was because of suicide. "His last words to me were, 'I love you and I will call you in the evening.' Those words are not words of somebody who is suicidal," Janice previously revealed. "All John wanted to do was spend his remaining years fishing and drinking. He did not deserve to die in a filthy prison, like a caged animal."