'F9' director Justin Lin also compliments the 'WAP' hitmaker for her involvement in the franchise, saying that 'she's actually really embedded into the overall universe.'

AceShowbiz - Vin Diesel has assured "Fast and Furious" fans that Cardi B will appear in the upcoming tenth and final installment of the franchise. Confirming the "WAP" hitmaker's return, the Dominic Toretto depicter said he is "excited" to evolve her character.

The 53-year-old actor made the revelation when speaking to Entertainment Tonight at the premiere for "F9". He said, "We are very much excited to evolve her character and to expand it to the finale. She made it just in time. She came in Fast 9 just in time."

Aside from Vin, "F9" director Justin Lin is looking forward to working with Cardi once again for the next installment. "I love Cardi, you know? I mean, it's amazing she showed up and within a minute she's part of the family, right?" Justin told the outlet.

"And I love how when I got together with her, her and Vin were talking about the character because she's actually really embedded into the overall universe, she's been around for a long time and this is just the first time we are seeing her, so I'm really excited to explore that character of her," the filmmaker further gushed. "I'll work with her any day."

Cardi, who stars as Leysa in "F9", previously talked about her role in an interview from the set of the movie. "Well, my management said Vin Diesel reached out and was talking about a role that on the next 'Fast and Furious' would become a bigger role, and I'm like, 'Ahhhh, why not?' " she first recalled.

"I was a little over doing short appearances in films, and I'm like, 'It's frickin' 'Fast and Furious' so I was like, 'Get me there. Put me on a plan,' " the wife of Offset further shared. "I like the fact that I'm representing such a powerful, strong woman.... She's just that b***h."

"Being around Vin, he's just so nice, so dope. He makes you feel so comfortable. I'm just so excited. He's just such a b****s," the femcee said of Vin, before she continued, "I remember when I saw Ludacris in 'Fast and Furious', when I saw Tego Calderon, then to see Don Omar, it was like a hype in the Latin community."

Vin Diesel: John Cena Was Sent by Late Paul Walker to Play My Brother in 'F9' 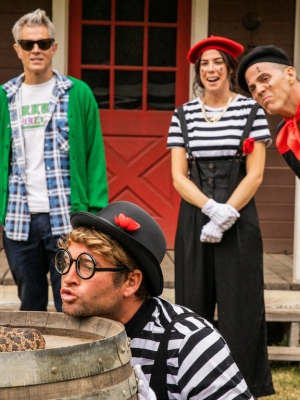