Following backlash over the lack of dark-skinned Afro-Latinos in lead roles in the musical film, the Tony-winning writer acknowledges, 'I can hear the hurt and frustration over colorism.'

AceShowbiz - Lin-Manuel Miranda has extended his apology after his latest movie "In the Heights" failed to show diversity that was supposed to be in the vein of the film. The musical pic, based on the stage musical of the same name by Quiara Alegria Hudes and Miranda, was criticized for the lack of black representation in lead roles.

Catching the heat, the Tony-winning writer released a statement via his official Twitter account on Monday, June 14. "I can hear the hurt and frustration over colorism, or feeling still unseen in the feedback," he addressed the backlash.

Admitting that he "fell short" on meeting his goal, Miranda continued, "I hear that without sufficient dark-skinned Afro-Latino representation, the work feels extractive of the community we wanted so much to represent with pride and joy. In trying to paint a mosaic of this community, we fell short. I'm truly sorry."

He went on expressing his willingness to learn from the criticism, "I'm learning from the feedback, I thank you for raising it, and I'm listening. I'm trying to hold space for both the incredible pride in the movie we made and be accountable for our shortcomings."

"Thanks for the honest feedback," he added. "I promise to do better in my future projects, and I'm dedicated to the learning and evolving we all have to do to make sure we are honoring our diverse and vibrant community." The actor/filmmaker then concluded the statement with, "Siempre, LMM." 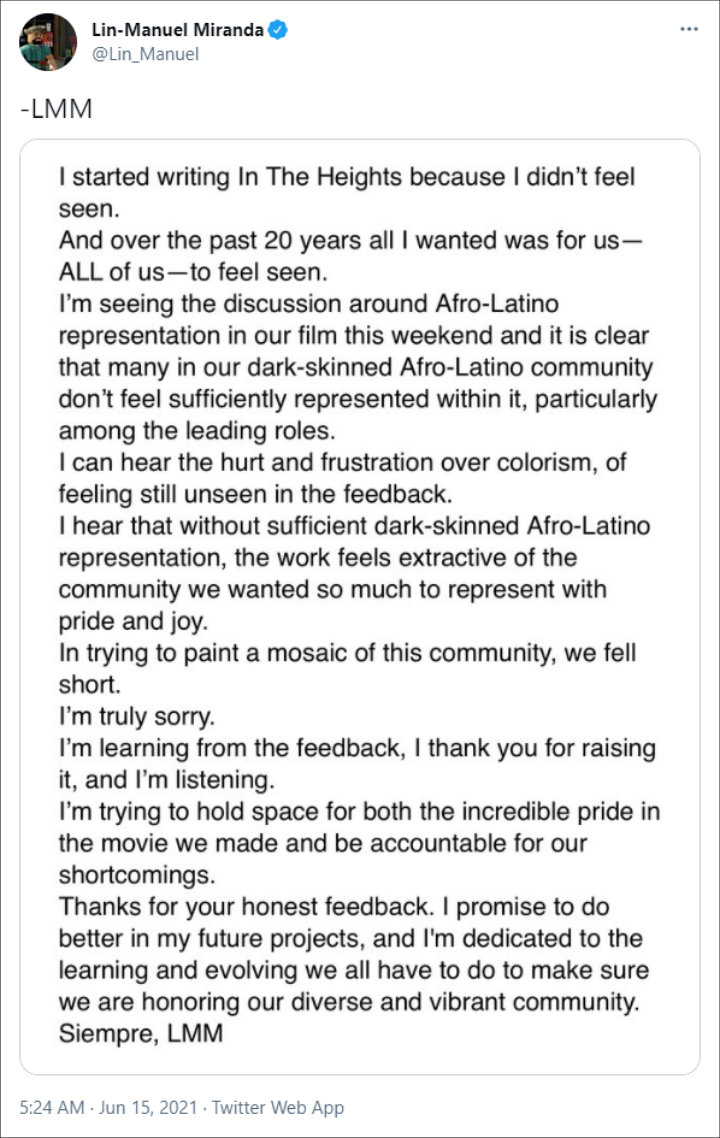 Lin-Manuel Miranda's statement of apology over 'In the Heights' backlash.

Miranda isn't the first to address the backlash as actress Stephanie Beatriz previously said in an interview with Entertainment Tonight, "Latino is a very broad statement, but what it has done traditionally is weed out people that are Black inside that community."

Actress and singer Leslie Grace, who plays Nina Rosario in the film and is Afro-Latino, also expressed her disappointment at the lack of black representation in "In the Heights". She told The Root, "I hope that this is cracking that glass ceiling because I do hope to see my brothers and sisters that are darker than me lead these movies."

To the same publication, director Jon M. Chu explained, "In the end, when we were looking at the cast, we tried to get people who were best for those roles ... But I hear you on trying to fill those cast members with darker skin." He added, "I hope that encourages more people to tell more stories, and get out there and do it right then ... We tried our best on all fronts of it."

"In the Heights" opened in theaters in the U.S. starting June 10. It debuted at No. 2 on the domestic box office to just $11.3 million, below the industry estimates of $13 million, despite majorly positive reviews from critics.