AceShowbiz - Lil Nas X has reacted to a new episode of "Saturday Night Live" which featured "Montero (Call Me By Your Name)" parody. Upon learning the show incorporated a sketch that was based on his new single, the rapper jokingly hoped that the cast was "going to hell."

The 21-year-old offered his reaction via Twitter on Saturday, April 3. Retweeting a shot of the sketch, he simply quipped, " '[SNL]' going to hell." In response to his post, Chris Redd, who portrayed the musician on the comedy show, replied, "Haaaaaaaahahhahahhahaha." 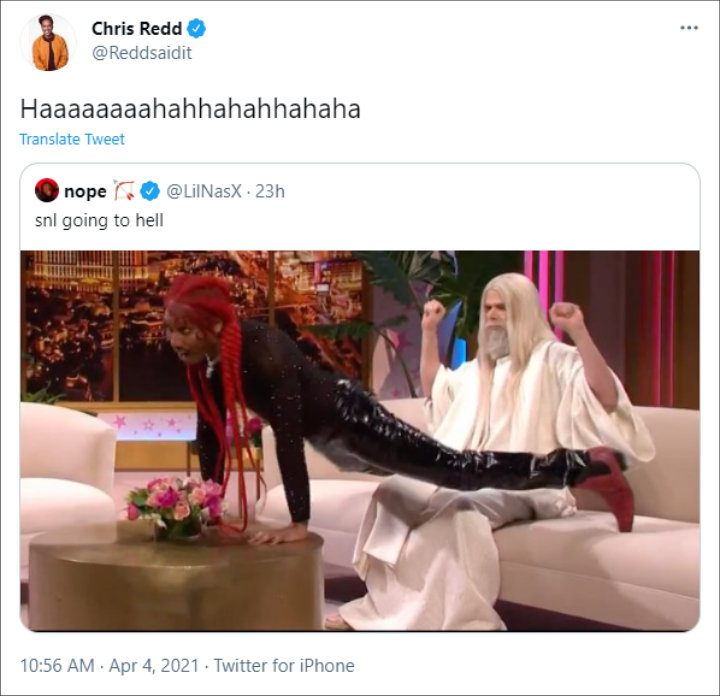 In the skit, Redd's Nas X gave God a lap dance instead of grinding on Satan's lap in Chloe Fineman's Britney Spears faux "Oops, You Did It Again" talk show. They also weighed in on the MC's "Satan Shoes".

Fineman's Spears first said, "I don't know why Nike is so mad. Their whole thing is 'Just Do It.' Well, I did it." When she aksed Redd's Nas X about backlash over his controversial sneakers, he answered, "People are afraid of me because I'm different, but really I'm just your typical gay, Black, country rap, sneaker entrepreneur."

The "Old Town Road" hitmaker himself has come under fire after promoting his "Satan Shoes". One in particular was Nike by filing a copyright infringement lawsuit against MSCHF which worked with him. The shoe giant also got its request to stop production of the footwear granted by a court.

In the wake of the court's decision, Nas X expressed his disappointment on Twitter. "i haven't been upset until today, i feel like it's f***ed up they have so much power they can get shoes cancelled. freedom of expression gone out of the window. but that's gonna change soon," he argued.

Nas X went on to defend himself over the trademark issues. When one of his followers explained, "You ripped off their design and logo. Everyone knows that's illegal. Someone as supposedly creative as you should have known better and designed your own shoe," he responded, "people make customs all the time, it's never been a problem. nike only stopped the sell of the shoe because a powerful group of people pushed them to do so."

'Game of Thrones' Prequel Adds Fabien Frankel to Its Cast