In a series of since-deleted tweets, 'The Vampire Diaries' alum has also vowed to never fly with the airlines as he accuses it of having 'complete disregard for customers or virus concerns.'

AceShowbiz - Paul Wesley is rallying against United Airlines for their alleged lack of safety concerns for their customers amid COVID-19 case surge. Accusing the airlines of turning blind eye to maskless passengers, the former star of "The Vampire Diaries" took to social media to air out his disappointment.

On Wednesday, December 30, the 38-year-old actor turned to Twitter to express his condemnation at the air service company. In response to a user declaration that Delta Airlines "has always been superior," he tweeted, "Indeed. Time and time again I see @united flight attendants turning a blind eye to people who don't wear masks. We must be diligent and save lives." 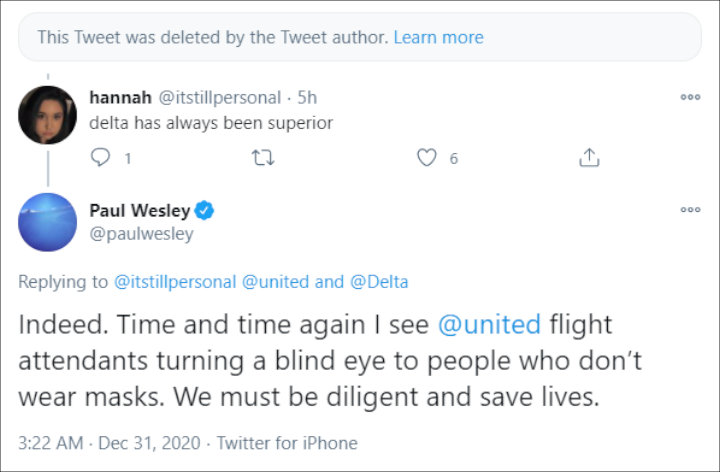 "Please retweet this [if] you agree @united is the worst airline in America. I will NEVER fly @united - I don't care if they are the only airline flying to a certain city," he then vowed. "I'd rather take a train or a boat. Complete disregard for customers or virus concerns. They could care less. @united."

The Eddie Longo of "Tell Me a Story" also urged people to boycott the company and recommended Delta Airlines instead. "Boycott @united fly @Delta instead," he pointed out. "Delta clears out their seats and makes sure it's not overcrowded. They care about your safety even if it costs them money. @united could care less."

Paul's discontentment with United Airlines was met with approval from his followers. One in particular was from "The Originals" star Sebastian Roche who replied one of his tweets, "I agree, i haven't flown them for years." A fan chimed in, "I always see United airlines having problems this is why I always fly Delta." Another wrote, "exactly! i've only flown them once in my entire life and i won’t be making that mistake again."