The actor, dancer and choreographer known for his role in two 'Breakin'' movies died at the age of 65 just one day after he shared on a social media post that he tested negative from COVID-19.

AceShowbiz - The world of hip-hop dancing has unexpectedly lost one of its pioneers. Adolfo Quinones, who was famously known as Shabba-Doo, passed away at the age of 65 on Wednesday, December 30, prompting the likes of Rosie Perez and Ice-T to express their heartbreak over the sudden loss on social media.

Paying a tribute to the late star of "Breakin' " and its sequel "Breakin' 2: Electric Boogaloo", "The Flight Attendant" actress Rosie tweeted, "No!! #AdolfoQuinones aka #ShabbaDoo A dance #Legend lost! A true dance pioneer!" She added, "I'm so saddened by this news and I'm so very sorry Toni for your loss, the #Lockers, his loved ones and especially his family! Stay safe."

Also turning to Twitter was Ice who shared a montage of Adolfo dancing with a note that read, "I just lost ANOTHER close friend... SHABBA-DO. LA dance legend. You may know from the Breakin Movies..Has passed away... FF**K 2020." Meanwhile, Mario Lopez tweeted, "Sad to hear of 'Shabba-Doo' and his passing...he brought so much to the dance culture, an inspiration to many, myself included..." 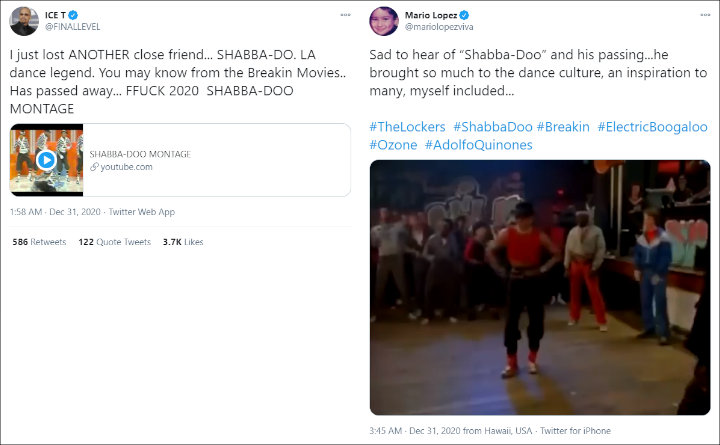 Ice-T and Mario Lopez mourned the loss of Shabba-doo.

Sheila E. also made use of Twitter to remember the late choreographer. "I just heard," she tweeted, "I've lost another friend Shabba do. A great Hiphop dancer. We toured together w/ Lionel Richie 1983. Gosh, Rest In Peace my brother." So did The Blessed Madonna who tweeted, "Damn, Shabba Doo. RIP. So sad to see so many of our foundational dancers passing this year." 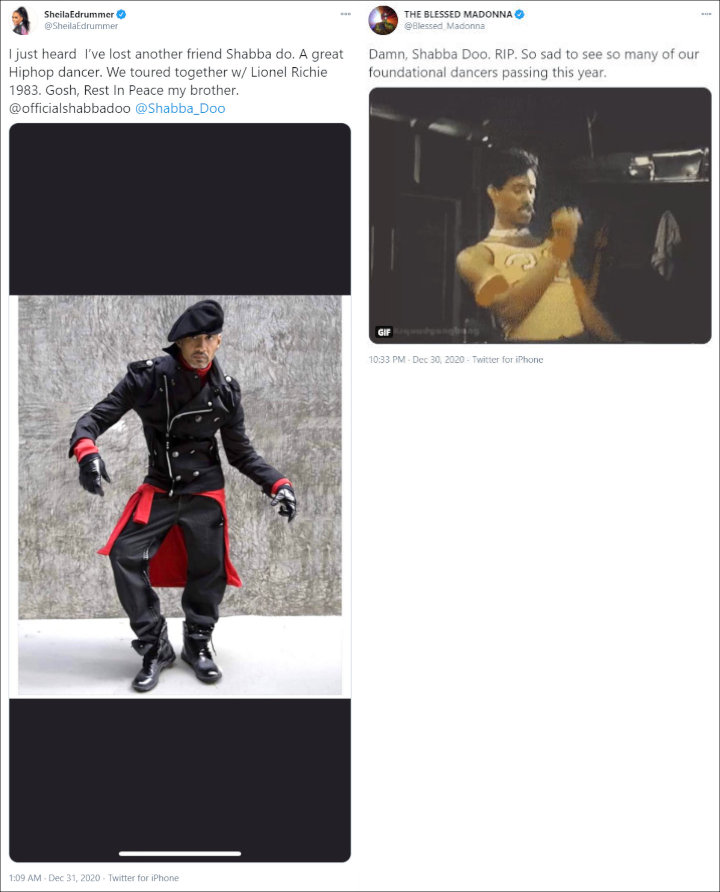 Sheila E. and The Blessed Madonna paid tribute to the late Shabba-Doo.

Sharing news of Adolfo's sudden passing was his fellow co-founder of The Lockers, Toni Basil. Through his Twitter account, Toni announced on Wednesday, "It is with extreme sadness The Lockers family announces the unexpected passing of our beloved Adolfo Shabba-doo Quinones. In this difficult time we are requesting privacy." 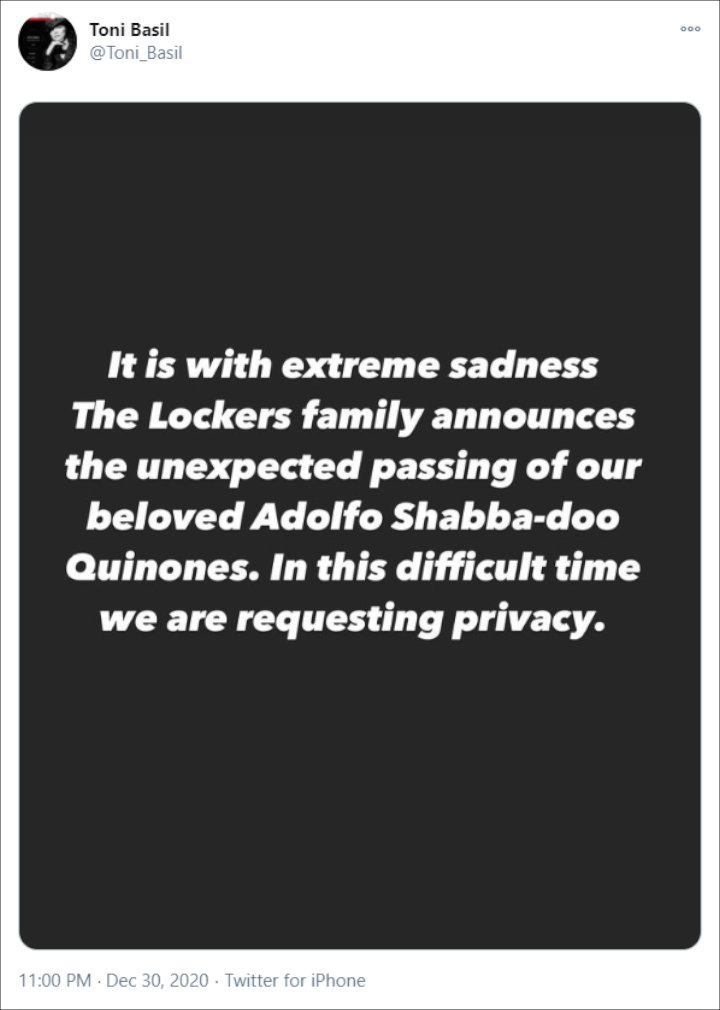 Just the day before, Adolfo shared with his Instagram followers that he tested negative for COVID-19. "Good news y'all! I'm feeling all better 'm just a wee bit sluggish from my cold," he wrote, "but the good news is I'm Covid 19 negative! Woo hoo!!! I awoke this morning to a gift from my pal, George 'DJ 360MIX' Jett! Thanks man! Anyway, I'm excited lots of catching up to do. Let's gooo!"

"Thank you to everyone for your kind, sweet, and loving get well wishes and thoughts," he added in the caption of his Tuesday, December 29 post. "Oh, I didn't sleep in my beanie and glasses, lol, I donned them cause my vanity kicked in and didn't want you to see my bed head, and crusty eyes, haha... Have a great day peeps."

Along with The Lockers, Adolfo helped popularize the dance style that was later known as "locking". He portrayed street artist Ozone in both "Breakin' " films, and served as a choreographer to Lionel Richie, Madonna and Luther Vandross. He also served as Madonna's primary dancer on her "Who's That Girl?" tour in 1987.

Diddy Doesn't Approve if His Teen Twin Daughters Are Dating: 'They Better Not'