In related news, the former One Direction member sends fans on Twitter into frenzy after one of them asks him about a possible collaboration with fellow singer Selena Gomez.

AceShowbiz - Rumors that Niall Horan might be dating actress Jodie Comer have been circulating online for quite some time. However, it was not until Tuesday, June 16 that the singer directly responded to fans discussing the matter on Twitter.

It started after a fan shared screen-grabs from both Niall and Jodie's Instagram Stories. The pictures saw them both wearing near identical rings, prompting the fan to come to the conclusion that Niall and the "Killing Eve" star are in a romantic relationship. "Confirmed! Niall Horan's new girlfriend is Jodie Comer!" the fan captioned the photos.

Niall apparently caught wind of the post and replied, "Confirmed??" before adding four crying-laughing emojis. Someone else chimed in and tried to deny the rumors on behalf of the former One Direction member. "he doesn't even know who she is girl," the fan claimed. Niall then set the record straight by saying that "he does" know Jodie. 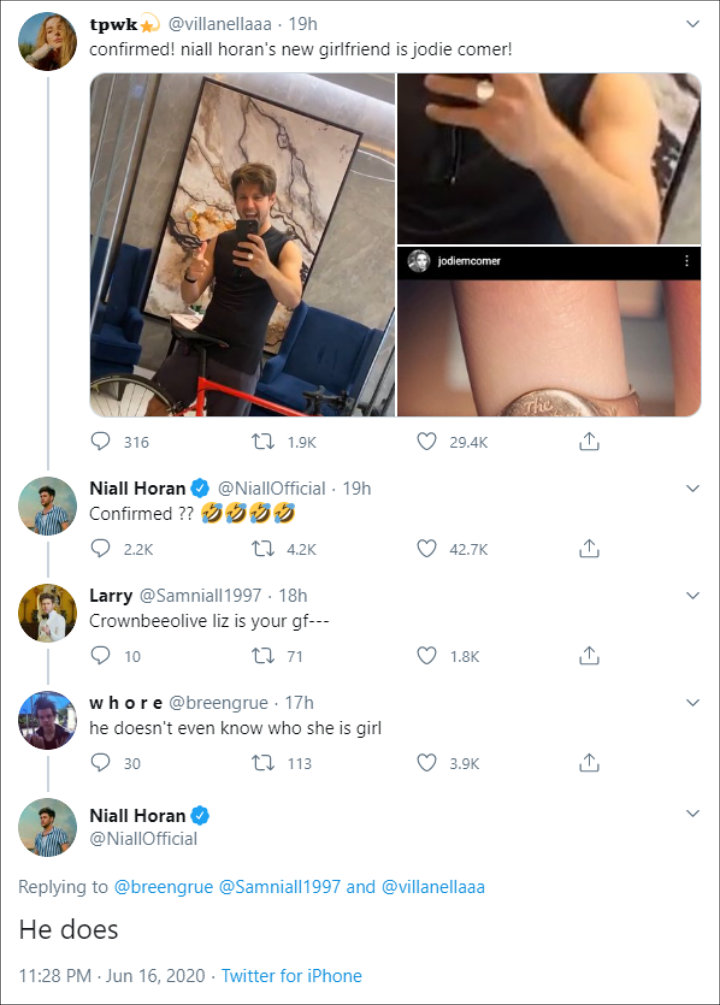 Hoping the "Nice to Meet Ya" singer to say whether or not the rumors are true, someone else wrote, "ok niall but does she tell us the truth or what? I'm feeling like a fool here."

In related news, Niall appeared to tease a possible collaboration with Selena Gomez. "Niall, what do you think about a collab with selena gomez? you both will smash it," a Twitter user wrote to him on Tuesday. Niall later sent fans into frenzy with his response, in which he said, "Ready when Sel is."

"OH MU GOD PLEASE UWNSKJS," an excited fan replied. Another fan added, "it would be so good! please text her first, because we know she will never see this tweetLoudly crying face we beg you!!!"

'Too Hot to Handle' Star Harry Jowsey on Francesca Farago Split: It 'Doesn't Always Work Out'

Regina King's Son and Only Child Ian Alexander Jr. Took His Own Life on His 26th Birthday