Brittany Cartwright, in the meantime, finds it shameful that she got dragged into allegations of racist acts after her former co-star opened up about her experience on the set as the only black cast member.

AceShowbiz - Jax Taylor's past incriminating allegation against Faith Stowers has caught up with him. Days after his former co-star opened up about her experience as the only black cast member on "Vanderpump Rules", the reality series regular was also unraveled to have publicly labeled her a criminal back in 2017.

The resurfacing December 4 tweet captured Taylor's reaction to a fan's suggestion that Stowers would like to be a permanent member of the show. "She's wanted by the police for grand theft auto and 'awol' from military, bad idea to be on a reality show dude," wrote the 40-year-old in response. "Someone's going to jail." 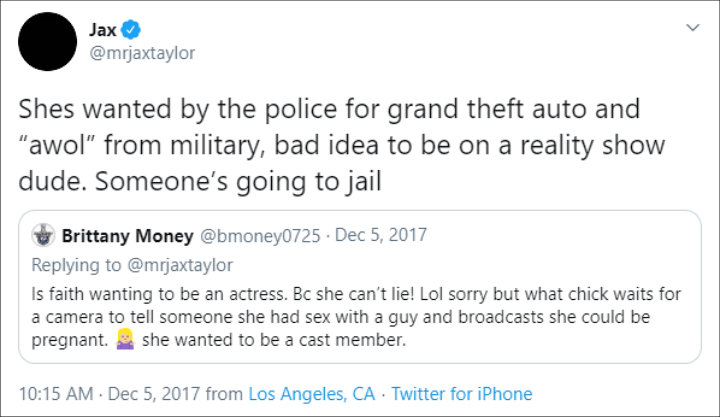 Jax Taylor accused Faith Stowers of being a criminal.

Taylor's comment was brought to attention days after Stowers opened up about former castmates Stassi Schroeder and Kristen Doute calling a cop on her. When chatting with "Floribama Shore" star Candace Rice during an Instagram Live session, the 31-year-old reality star talked about how her hook-up with him led to attack after attack at her.

Stowers' candid confession has since prompted both Schroeder and Doute to issue an apology to her. In her statement, Schroeder said, "I have grown significantly from the person I was then, and I am still filled with remorse and regret for the hurt I caused," while Doute clarified in a separate statement, "I'm ashamed, embarrassed, and incredibly sorry. I will do better. I have to do better."

Taylor's wife Brittany Cartwright, in the meantime, did not appreciate being dragged to the racism drama. In the comment section of her Black Lives Matter post which has since been turned off, the 31-year-old stressed, "I had NOTHING to do with that. She knows I don't have a racist bone in my body. She hurt me really bad and never once apologized."

"I haven't spoken to her since the night I found out [Taylor cheated], and I did not say anything about nappy hair," she continued explaining her side of the story. "I yelled at her and did that rightfully so like any other human being would if they had just found out what I did. If she ever even tried one time to apologize to me I could have forgiven her like I did [Taylor] but she never did or even showed remorse for how bad she hurt me."

Cartwright went on to point out, "I was nothing but nice and kind to her up until that point and I had nothing to do with any cops. She knows that I have NEVER once spoken publicly about her. It's a shame I'm getting dragged into this whenever I have finally been able to move on with my life. I will continue to support this movement and I won't let this drag me down. Have a great day."