AceShowbiz - Meek Mill launched tirade on Instagram after his rumored girlfriend Milano Di Rouge's store in Philadelphia was ransacked by robbers. He claimed the culprits were black and vented his frustrations as to why black people targeted their own people.

"Some bums a** n***as robbed Milano store … All she do is donate and inspire lol y'all brazy … out of all stores that make money in that area own(ed) by all races but blacks …," the Philly rap star ranted. "The black people chose to rob the black people … n***a-itis." 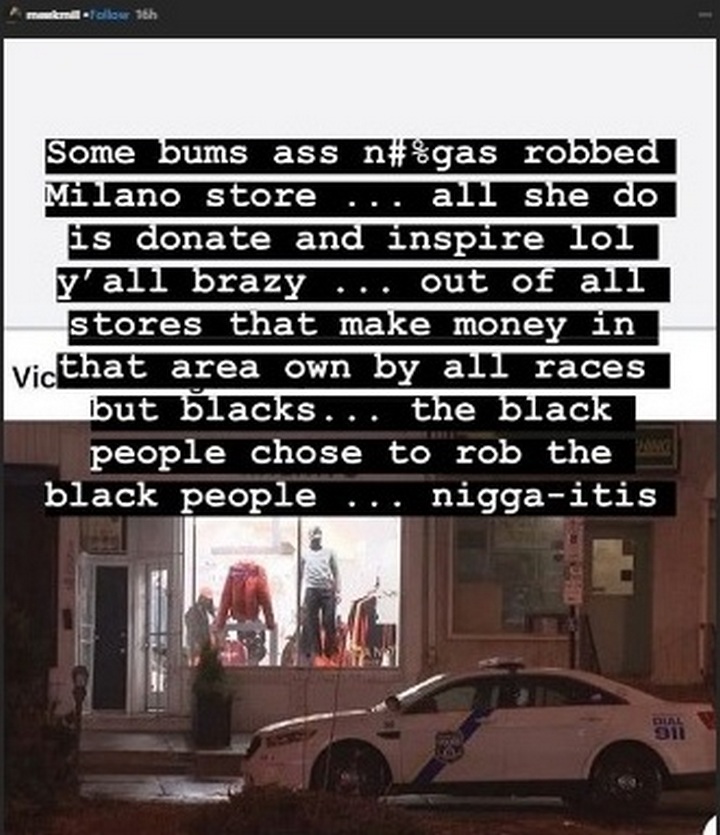 Two armed men wearing masks allegedly robbed Milano's clothing store on Friday, December 13. The thieves fled the scene with $5,318 in cash. Investigation is still underway and no arrests have been made. Milano herself hasn't made any comment.

She recently attended a concert in Baltimore with her rumored boyfriend. The couple seemingly jetted off to the venue in the same private plane. Although neither confirmed their relationship, they were often spotted at the same event.

In May this year, she fueled the dating rumors on Instagram. When one of her followers told her to embrace her natural hair since Meek Mill hated lace fronts, she replied, "I like lace fronts even if he don't. I'll still wear wigs. I just need to give it a break."

She made the comment only a few months after the rapper tweeted, "Lace front wigs are wackkkk! I'm protesting them." He added, "I just hate when you see that lace cap line in front all slicked down and the net in the middle [laugh] we letting y'all have everything else .... ask y'all man how he feel lol."

He took a lot of heat apparently as he felt the need to explain himself, "I'm sorry lol I just had a few bad lace experiences that traumatized me .... you ever get food poisoning from eating something and never wanna eat it again [laugh] it's the same feeling."

"I was hitting something from the back grabbed her hair just to make it a lil rough and it slipped off and ever since It's been trauma," he continued.

Did Meek Mill Just Confirm He Is Milano di Rouge's Baby Daddy With This Tweet?