The 'Coffee Convos' podcast host appears to accuse her estranged father of playing the 'sympathy card' by giving an update on his son's hospitalization amid tax evasion scandal.

AceShowbiz - Lindsie Chrisley has little to no sympathy for her father Todd Chrisley and his family as they continue to grow apart amid his tax evasion scandal. Most recently, the 26-year-old appeared to have dissed her estranged father after he shared a family photo with his son Kyle Chrisley in the hospital.

In the image, Kyle lied in a hospital bed, surrounded by his family members, including father Todd, mother Julie Chrisley, sister Savannah Chrisley, brothers Chase Chrisley and Grayson Chrisley as well as grandmother Faye Chrisley. Todd gave an update about his son's hospitalization in the caption, writing, "NOT TODAY SATAN, NOT TODAY... God shows up and shows out , now won't he do it ? Kyle is great and we are back to the grind .."

According to a spokesperson for the Chrisley family, "Kyle is fine. He had an adverse reaction to his medication, but as you can see from the photo his father posted on Instagram, he is doing great."

Within the same hour her dad posted the picture on Wednesday, August 28, Lindsie tweeted a cryptic message, "Gah, flexing that sympathy card so hard. Keep reaching boo." While she made no mention of a name, many believe that her tweet was directed at her father Todd.

"Your dad's like a 4year old girl seeking attention from everyone. It's so good to see his guilt playing out before us," one user who supports Lindsie replied to her post. Another accused Todd of being fake, "Never made a post about Kyle until, of all times, now ... . Not obvious at all....Their social media is at an all time high of fakeness."

A few hours later, the "Chrisley Knows Best" star posted a poem by Ariana Dancu about keeping memories of the past far away. "One night she took/ her memories out/ and hung them in the sky. She hooked one on/ every distant star/ and as they burned/ down into scars/ She knew that's how she wanted them to stay/ Beautiful but faraway," it read. 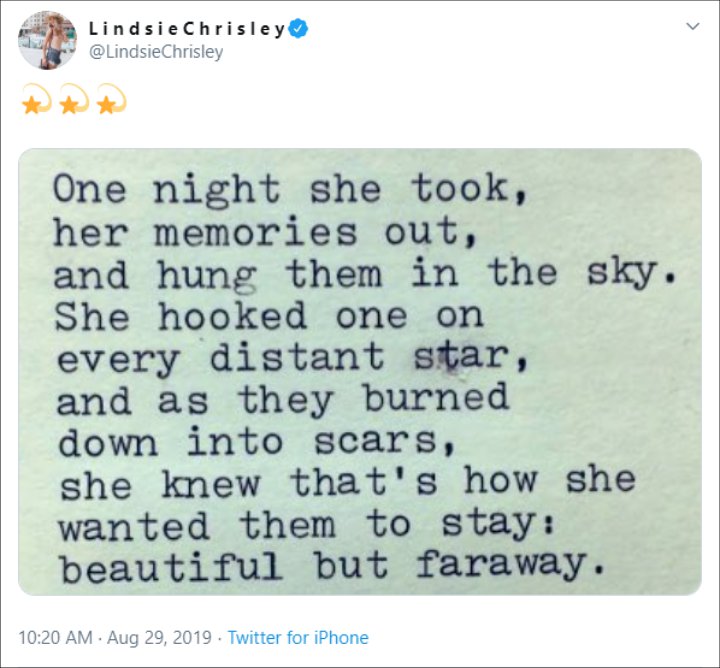 Todd and Julie were indicted on 12 counts of conspiracy, bank fraud, wire fraud and tax evasion on August 13. They pleaded not guilty to all charges and were released after posting a $100,000 unsecured bond each.

Todd's family has been accusing Lindsie of feeding information to authorities that led to their father's arrest, but she denied it. The "Coffee Convos" podcast host, meanwhile, accused her father of trying to extort her with a sex tape and force her to lie about an incident.

Todd denied the allegations of extortion attempt and hit back at his daughter by claiming that she had extramarital relationships with "The Bachelorette" stars Josh Murray and Robby Hayes. While Josh denied they had an affair, Robby has confirmed the existence of the sex tape featuring him and Lindsie. He clarified that they did not intentionally make it, though.

"We did not make a sex tape. I'm not sitting there with a camera aimed down, like trying to get the angles," he stated. "Like, we got caught on the security camera, basically. It was a puppy camera in her friend's living room, the couch we crashed on. So, no consent from either end, which kind of debunks the whole thing," he added.