Sharing her thought on the massacres that claimed 29 lives, the 'Follow Your Arrow' singer angrily tweets, 'True leaders don't stand back and watch the world burn.'

AceShowbiz - Country star Kacey Musgraves has added her name to the growing list of celebrities taking aim at President Donald Trump following the mass shooting incidents in Texas and Ohio over the weekend.

The "Follow Your Arrow" singer took to social media on Monday (August 05) to address the massacres, which cost 29 people their lives, and it was clear she was targeting Trump.

"For a man who clearly loves being well-liked, it's indescribably mind-numbing to see him blatantly and murderously ignore doing ONE THING that would not only make people happy but would SAVE PEOPLE'S Lives," she wrote. "True leaders don't stand back and watch the world burn. @realdonaldtrump." 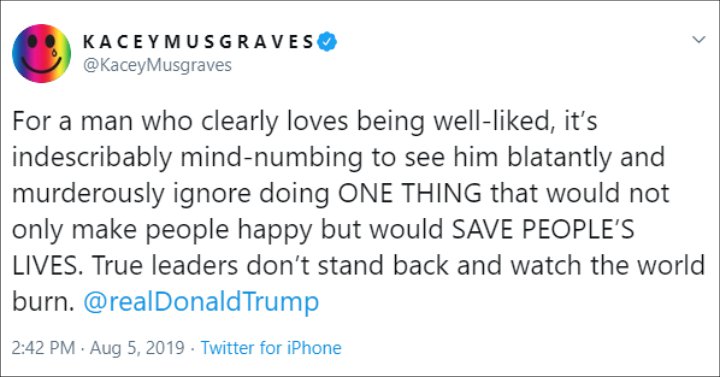 She also referenced the tragedies backstage at the Lollapalooza festival in Chicago, Illinois over the weekend, tweeting: "We all need music & each other more than ever right now but how many of us will have to die before SOMEBODY F**KING DOES SOMETHING."

She added: "Don't you hear us, @realDonaldTrump? Don't you hear our pain? You have the power to become a hero. Why don't you take it?"

Kacey Musgraves urged Donald Trump to do something.

Musgraves was one of many, including Cardi B, Rihanna and John Legend, who directly or indirectly attacked Trump and urged him to change gun laws in America.

The President staged a press conference on Monday morning, when he made his first public statement about the two shooting incidents, announcing that any new gun legislation should be tied to "desperately needed immigration reform".

He also assured Americans that more efforts will be taken to keep guns out of the hands of the irresponsible and unstable.