Leah Messer Hits Back at Jenelle Evans for Parent-Shaming Her: 'Stop Attacking People'

Hitting back at a user who says she isn't a 'good mom,' the former 'Teen Mom 2' star writes, 'So I guess Leah's not a good mom? She got her kids taken and given back just like me.'

AceShowbiz - Even though Jenelle Evans is no longer starring on "Teen Mom 2", her feuds with her former co-stars are still alive and burning. Most recently, she took a shot at Leah Messer over her parenting skill, and the latter didn't take a long time to hit back at the North Caroline native.

It all started over the weekend when Jenelle clapped back at a Twitter user who slammed her over her recent family drama, in which she temporary lost custody of her children in the wake of a dog-killing scandal involving her husband David Eason. "None of you can stand that fact that my family is back together," the MTV alum said, insisting that she's a "good mom" despite the drama. "Don't let anyone bring you down!" she added.

Following her proclamation, another pointed out that good moms don't have their children taken away from them, and that was when she shaded Leah. "So I guess Leah's not a good mom? She got her kids taken and given back just like me," she wrote back to the user. A fan of Leah was enraged by her remarks and slammed Jenelle, "Don't you EVER compare yourself to [Leah]. Your situations were not similar, she always had the rights to see her children UNSUPERVISED. Her custody agreement changed for a moment and that is all. Stfu for ONCE."

Leah then decided to join in the conversation, criticizing Jenelle for always pinning "her troubles on someone." She added, "Why not it be me? Worry about what's good for you and those babies Jenelle. Stop attacking people on social media." In another tweet, she stated that her former co-star "ain't worth my time." 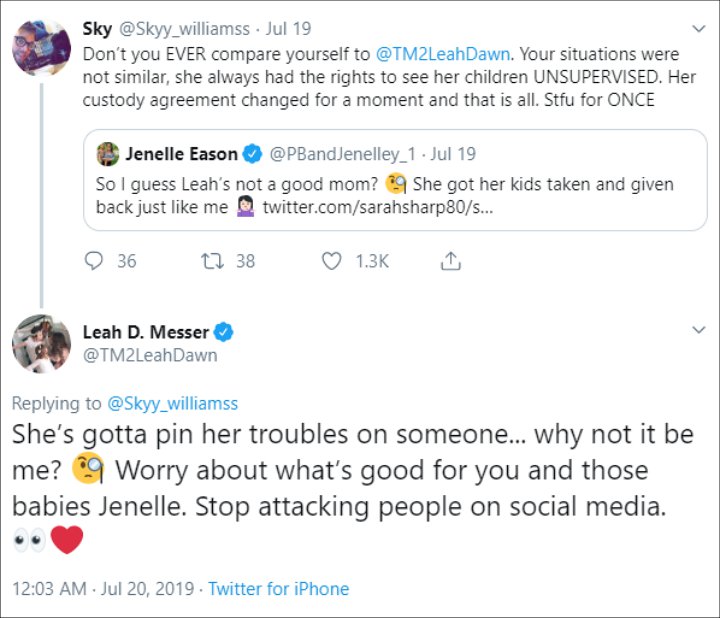 Back in 2015, Leah and Corey Simms fought over the custody of their two daughters Ali and Aleeah after she sought treatment for anxiety and depression. She won the battle in the following year.

Leah Messer Hits Back at Jenelle Evans for Parent-Shaming Her: 'Stop Attacking People'